At NUST: Fined for ‘wearing tight’ or no ‘dopatta’ 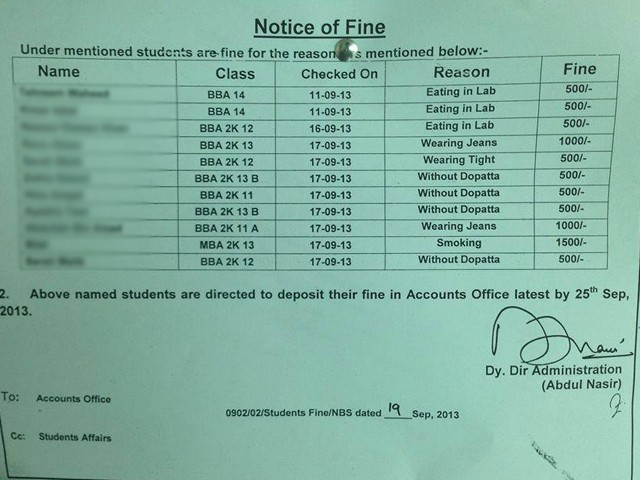 As its contribution towards disciplining the youth of this country, the National University of Sciences and Technology (Nust) imposes fines on students for breaking their dress code.

In their haste to fine students for wearing jeans and not wearing a dupatta they overlook something called grammar. No one is perfect, but when one is running an institution of higher learning perhaps one should have higher expectations. However, I digress.

According to dawn.com, Nust has denied the report and stated only that students are instructed to wear ‘decent’ dresses. The fact, however, remains is that this isn’t the first time students have been fined at Nust or other similar higher educational institutions and this surely won’t be the last time.

If there was ever an illustration of why our educational system is failing, the picture above speaks a thousand words. The lazy assumption that regimentation, discipline and uniformity makes one educated died a mournless death back in the early 20th century. Individuals associated with the military, bureaucracy or civil service who then venture into the education sector impose what they know to be the best system – or at the very least what they believe works best for themselves.

This top down, administration pleasing approach to education is of little service to the students themselves. Rather than situating teachers as the centre of academic learning, students face the red tape and bureaucracy of administrators who arrive at these positions with little or no background in formal education.

This patronising and condescending attitude of educational institutions towards their students which assumes that adults are unable to make good choices for themselves does little to help young adults mature and broaden their exposure if they continue to be treated as if they are in school. While an 18-year-old can join the military, drive a car, obtain a pilot licence, Nust believes that a 22-year-old must conform to an individual administrator’s whims of what is and what is not proper.

However, should any of us be surprised that an institution of higher learning enforces a dress code and treats it as a disciplinary issue?

When the picture of the notification went viral, the obligatory commentary on how we are an Islamic country and women (in particular) should observe “proper dress”, followed. Somehow our culture and society is hotwired to view any woman who makes choices that essentially impact her, a public matter.

Are all the men present in Nust unable to avert their gaze if they are offended by a woman not wearing a duppata? Can the concerned instructer keep his personal world view a private matter and not impose it over an entire community of learners?

Hypocritically, while the youth of the country who end up at such institutions need to be disciplined and regimented, the sons and daughters of the very same administrators who end up running these institutions, attend the undisciplined universities abroad.

The vigour with which such rules are enforced is sadly not met with the same enthusiasm when substantive issues regarding teaching and student welfare hit the headlines. When allegations of rape were made in another institution that enforces a dress code; International Islamic University, the dean at the time commented that to protect the institutions honour the case should be hushed up. When a teacher and some students protested against the administration of Bahria University the administrators called in naval intelligence to keep tabs on the demonstrators. A retired Brigadier assaulted a lecturer in National University of Modern Languages (NUML) and he was made to apologise for “inflaming the emotions” of the retired officer.

When all else fails the following argument is offered:

If the students are unhappy they can leave.

What a shameful fall back. Higher education, or indeed any form of education should be about inclusiveness, reducing barriers and encouraging individualism. These institutions are subsidised by the tax payer, receive state land at a subsidised rate. To say, students should have to leave an institution of higher learning because of the clothes they wear does not conform to the administration’s world view shows how warped our idea of what education is and should be actually is.

Why is it then that students and parents put up with this? Do parents believe that their son or daughter in their early 20s needs to be treated in a university as if they are in school? Do students accept these norms because they have been socialised to believe that being told what to wear as an adult is acceptable?

Perhaps what is most frightening: do the administrators at Nust believe that such rules actually equate to an education? That is the question that we must all consider. If we think it does, then perhaps someone should send an email to all the universities currently ranked higher than Nust, as they have definitely missed a trick.