I am sorry Convent of Jesus and Mary, for I have failed you 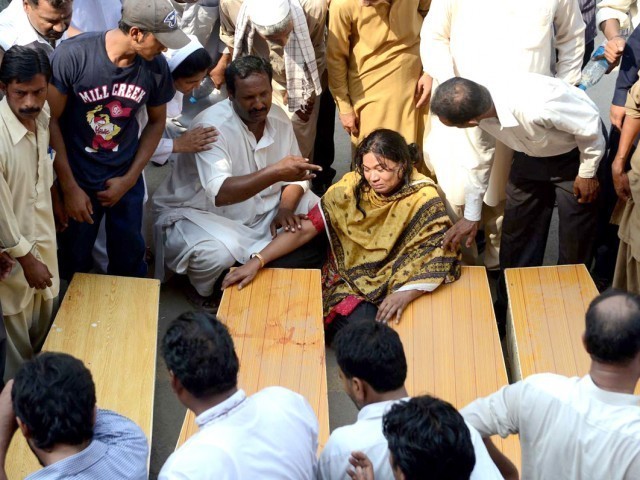 Pakistani Christian mourners gather around the coffins of relatives who were killed as twin blasts tore through All Saints Church on September 22, 2013. PHOTO: AFP

I am a graduate of the Convent of Jesus and Mary (CJM), Lahore – a sprawling campus situated off the Mall Road. Every day at 8:00 am sharp, we were made to stand at arm’s length from each other in lines as straight as they could be. We would first make these rows outside the intimidating assembly hall, and then one by one we would march in, making sure our backs were straight and shoulders pushed back. If anyone dared to whisper or fidget, a vigilant nun would drag that girl out and make her stand in a separate line at the back.

The assembly hall would be decorated with stunning and intricate statues of the Virgin Mary and Jesus, and at particularly boring moments during the assembly I would busy myself counting the folds on Mary’s dress.

Sister Madeliene was the senior school head mistress, and when I was elected Head Girl the first hug I got was from her. It was a Christian teacher who baked me a chocolate and peach cake on my birthday and came over to my house to wish me. And it was a nun who rehearsed speeches endlessly with me, again and again emphasising how I needed to project my voice, use my hands, and get the voice out from my tummy. After I graduated from CJM I began winning debate and declamation contests everywhere I went, finding it easy to impress judges with my ability to get the voice out from my tummy.

When I was leaving my school, tears flowed freely down my cheeks and I felt as if I was leaving my childhood home. A big group of us sat together under the shade of the centuries old trees and wailed, some of us reducing to hiccups, as we wondered about the various paths we were all about to choose. At this time it was Sister Andrews who consoled us, and gave us the courage to realise that, armed with the tools CJM had given us, we would go far.

Many of my classmates were Christians but I only realised this during Religious Studies class when a bespectacled, white haired short woman who wore wedge heels would come into our classroom to teach us and an entire group of girls would silently file out into another room to study Bible Studies under a nun.

With names like Fatima, Kiran and Hina, my Christian class fellows sounded and looked no different than their Muslim counterparts. They came to my birthday, I went to theirs. We did science projects together, and teased each other about hair styles gone wrong or a crush on a movie star. On Christmas we looked forward to carol renditions (and it was a matter of pride for Muslim girls to be chosen to sing in the choirs) and on Eid they enjoyed making Eid cards with us during art and crafts.

My favourite Christmas memories are of eating fruit cake at the Nunnery located at the back of the school or of visiting the houses of the Christian faculty with baskets of homemade cookies, and being treated to Christmas pudding.

The prayers which we were made to recite before the school day began at the end of the last period, on special occasions, and sometimes even during recess, always included declarations of love and peace for our country.

Today, I am sorry Convent of Jesus and Mary that I have failed you. Along with the so many hundreds and thousands of women you educated and instructed, I have failed to live up to your expectations. I, along with the dozens of Head Girls and Captains you had such high hopes from, have failed you. We have returned your messages of love and compassion with hatred. We have responded to your preaching of tolerance with intolerance. And today, we have murdered your kin when you did everything in your power to protect us whilst we remained in your care.

I am sorry CJM for today I have failed you.

A journalist and writer based in Islamabad. She has previously worked for the national in Abu Dhabi: time.com and the daily times. She tweets @talkatease (twitter.com/talkatease)

Islamabad is the safest city in Pakistan? Not today...

Pregnant and tired? Don't induce labour till you read this!

Malala and Abeer: The difference in the narrative told by the West