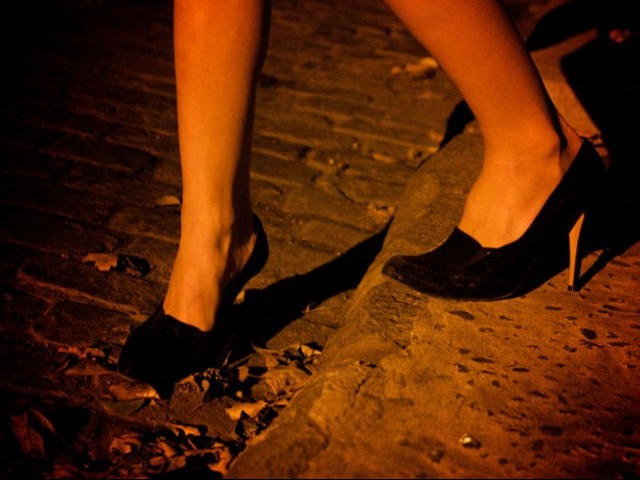 Women have been forced, lured or trafficked in to prostitution in Pakistan

As I sat in my car stuck in a traffic jam on Zamzama, I noticed two women standing on the pavement.

One appeared to be in her late twenties and the other barely 16 or 17-years-old.  Their high heels, tight tank tops and heavy makeup made them stand out. Both seemed to be waiting for a ride. They kept leaning towards the road giggling at each other. A Civic slowed down as it approached them. As a window rolled down a short conversation took place and the two women got in the car. I realized I had just witnessed two prostitutes getting a client.

For the next hour I couldn’t stop thinking about what I had just witnessed. I felt a strangely disgusted and depressed. Prostitution in Pakistan is taboo.  The sex-trade is an open secret although it is officially illegal.

According to human rights groups, about 200,000 women and children are sold into in the slave trade. Women of Bengali descent are traded most often and 1,500 women are in Pakistani prisons.

The root causes of prostitution in Pakistan are poverty and a dearth of opportunities. When widows find themselves on the street with mouths to feed they feel prostitution offers the only solution. A Pakistani prostitute can earn Rs2,000 to Rs3,000 rupees per day compared to the average monthly income of Rs2,500 rupees for domestic staff or a laborer.

I wondered that night, if prostitution is illegal in Pakistan, why is it so common?

I believe the truth is that in an increasingly materialistic society, values have become skewed, and practices that were once considered taboo no longer bring forth the censure that was once their due.

In many cases, politicians act as procurers in return for political favors such as lucrative ministries while businessmen resort to the practice to clinch business deals. Lahore’s famous red light area comes alive only at night. We all know prostitutes are available there – if it’s illegal why is nothing being done about it? Why cant we educate these women and provide them employment opportunities to put an end to this dark trade?

Now as the scale of the flood crisis worsens the threat of trafficking is growing. According to human rights expert, Dr Tahmina Rashid, human trafficking was already a very real threat before the floods and now, as the monsoon rains threateten to hit southern Pakistan, more people are in danger.

My father's battle with Parkinson's

They're armed, dangerous and crazy about lawn!

If you're 'fair and innocent', will you marry my son?

KESC misdeeds and the abuse of power