Pakistani blood is cheap, but negotiations with the Taliban is an outrageous idea 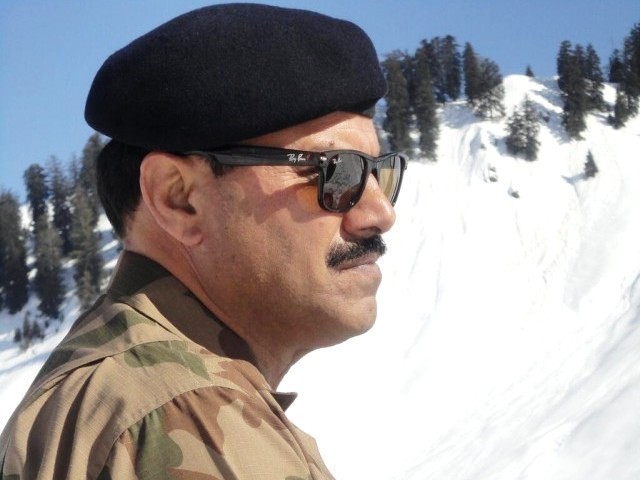 Born in 1960 in Mianwali, Punjab, he joined the Pakistan Army in 1983 as a commissioned officer. PHOTO: ISPR

A dead major general is nothing to be ashamed of. There are countries in our neighbourhood who have lost their presidents and prime ministers to the violence of dissenters. We ourselves lost a former prime minister and popular leader to bullets.

For a country that gave away 50,000 lives, a dead major general and a dead ex-premier are nothing less than souvenirs. Their blood is the symbol of the country’s determination and steadfastness towards the right cause.

This is the sad stance that most of us have taken so far.

However, now, with attempts to reach a settlement with the Taliban, it can rightfully be asked: determination and steadfastness against whom, or what?

If the Taliban are just fellow countrymen with some specific demands amenable to reason, then what has been happening over the past decade? Was this nothing more than a sinister charade? Does this mean that 50,000 people are dead just because we made a careless strategic mistake? A prime minister is dead just because she was headstrong and a woman? Major General Sanaullah is dead only because he was retreating a day too late?

Our political representatives, in fear of their lives, kneel down before the ogre which with its demands shames even the insatiable Giaour of Caliph Vathek. However, if we are willing to end the tyranny of self-respect and forget the cheap blood of our women and children, we must acknowledge that a major general has  fallen in a lost battle, and was lost to a fallen city.”.

It is unfortunate to see that a nation based on shame and honour – as one writer once derisively put it – would one day be represented by people completely free of both these qualities; people, who conveniently forget that in the last ten years, Pakistanis have given up all they could to restore peace. It was not so long ago that the government effectively ceded control of the whole Malakand division to the militants to restrict them to just one part of the country.

The Taliban first had our religion, then our culture, and finally our land and people, and in return they wouldn’t even give us their word! Before long, they had regained their appetite. Our leaders’ short memories forget our sacrifices, while we lament with King Solomon:

Never has a group of men presented so clear a case against themselves; never has there been a reason to hate them and to be disgusted more.

Yet, the pussyfooting goes on like always; first the priests lost ground, then the politicians gave up and now the public is being made to surrender too at the altar of peace.

However, one should not be so naive as to accuse the Taliban of specifically targeting our senior army officers. We, who have lived and suffered in Pakistan, can stand witness to the Taliban’s visceral dislike of discrimination. They have shown themselves to be as willing to kidnap a prime minister’s son in the name of God as to shoot a teenage girl in the name of God.

It makes no difference to them, whether the blood they shed is of a middle-aged social worker or of members of a foreign cricket team. It makes absolutely no difference to their depraved hearts and dead consciences as to how many orphan hands, mourning women and dead men shoulder the burden of their cause.

The world, in vain, and in words of Rumi tells them,

“You are not God’s mouthpiece. Try to be an ear, and if you do speak, ask for explanations.”

In our self delusions and lack of cynicism, we wonder why these men don’t question themselves. The truth is they can’t! They can’t because they have made themselves the defenders of the faith. They have arrogated the right to judge and punish, and that is exactly why there is no moral red line which they can’t be expected to cross. That is why a country based on any value or principle cannot reason with them.

Their righteousness permits them to break societies, lives and even their own word. It is time we understand that those who surround us are no sentient men born in prejudice, but little, unfeeling demons whom we can’t possibly live with. Everybody knows that a deal between men and demons can never be just.

The nation is in ruins but the battle lines haven’t been drawn. With their girls being shot in broad daylight, women stoned, shrines bombed, schools destroyed, rituals violently mocked, political representatives killed, and army officers slaughtered, these people, these negotiators, still have the time and the nerve to differentiate between the good and the bad Taliban?

A graduate from UCL, who is interested in and blogs about theology and history.