Rape is NOT cool 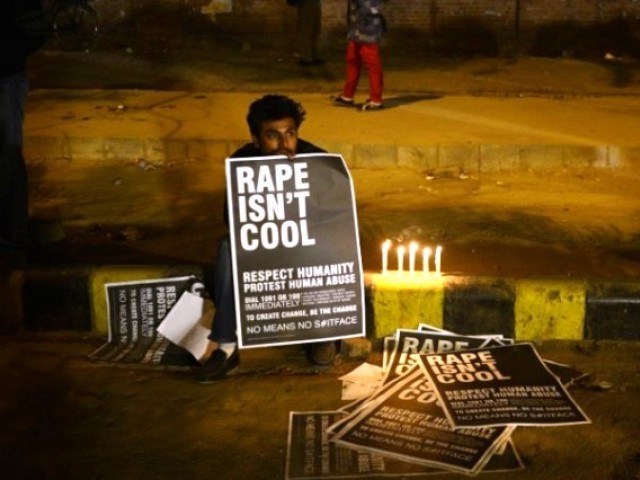 We need to turn our attention to the other side of the coin, instead of only teaching women to prevent rape, the society needs to teach the idea that rape is not cool. PHOTO: AFP

The 21st century has no room for patriarchal societies. The social structure of Pakistan has been moulded, formed and structured in a way to undermine issues of “the other gender” and feminism has no traces other than low-scale campaigns, most of which have been in vain. We have become a society immune to news of loss, tragedy and horrors. Every day, the bright screen in the corner of the room brings news of bombs, murders and countless tragedies, all of which pass us by in our own self-created apathy.

The recent issue of rape in a street of Lahore has been highlighted by the media and responded to by the public, showing a changing attitude in response to such incidents. While rape cases are nothing new in Pakistan, the amount of attention given to a specific case is unique. Our neighbour, India, has been going through a similar social crisis and has set an exemplary response by announcing the death-penalty verdict for the four convicts of the incident. It is about time we learn something from them.

Our society, being traditionally gender-biased, has always taught women to dress modestly, avoid shady areas and protect themselves. While the idea of empowering women to protect themselves from such incidents is somewhat a short-run solution, it does not provide a solution to rid Pakistan of this social menace.

The idea of objectifying women is instilled deep within certain portions of the male populace in the country, and needs to be challenged at a larger scale than it currently is. Why is it that only a woman should be careful while the man – a predator – goes scot-free? Why don’t we teach men here that rape is bad?

The source of this problem lies in lack of awareness, illiteracy, immunity to tragedy and a large level of sexual frustration.

I believe that it is now high time to turn our attention to the other side of the coin, instead of only teaching women to prevent rape, the society needs to teach the idea that rape is not cool. Men need to be brought under the limelight now.

Campaigns at a local level and Facebook pages only go a small way in combating this massive problem. The major tool in this battle, as evident in the Indian attempts to solve this problem, is going to be the mass media. The problem is mostly psychological and ideologies can only be fought by providing counter-ideologies. Mass media needs to instil ideas, run campaigns and provide teachings based on religious, cultural and social norms as examples to remove the objectification of women as something acceptable in our society.

Issues such as these need to be brought up with more frequency and should not be passed over or ignored when the news of the next Bollywood movie release comes out. It would be evidence of the Pakistani media finally acting as a pillar of the state and using its role to instil social responsibility.

There also need to be psychological-help-provision-units for people with such dangerous urges. The mentality of male-superiority does not limit itself to rape cases; it is evident in the streets through long gazes, in conversations and in everyday life in Pakistan. People with mental issues and urges which eventually lead to rape need to be addressed and these future culprits of rape incidents need to be treated and given proper attention to.

The other key weapon is the judicial system, something that has been a source of constant criticism and recently failed to set an example in the Shahzeb Khan murder case. However, while the courts fault in that case might be debatable, there will be no excuse for not setting the recently highlighted incident of rape as an example. Pakistan needs to decide whether it is ready to allow the death penalty like in India, or a similar punishment to send a message that there exists, a system to combat people assuming free-will in the society.

It is only through a combination of these methods that the social status of women in Pakistan can be raised to a level of ridding Pakistan of such incidents, from which the international world seems to be moving on (even though it is still common in some parts of the world). The modern world does not accommodate patriarchal ideologies, and the Pakistani populace needs to know, that it isn’t, and never was, “cool” to objectify, berate and rape women.

A student of Economics/Political Science at the Lahore University of Management Sciences.

To the Taliban, We are Pakistan and we will never forgive you

My leader can do no wrong

Marking the end of tiki-taka in football?

Free the PCB from government intervention