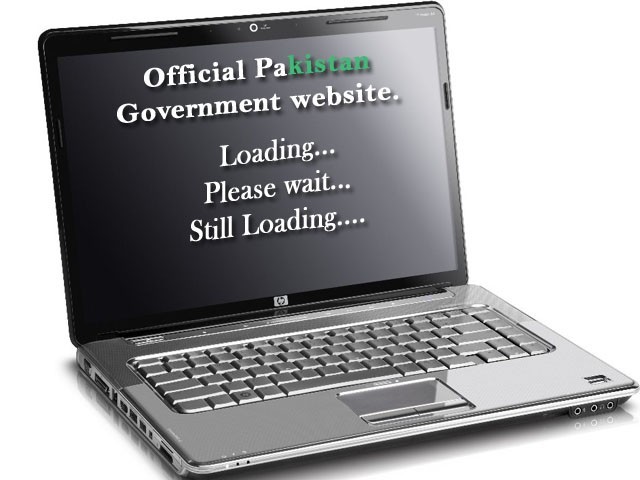 Why not create some decent menus or guides instead of mindlessly dumping all the services the website has to offer in a primitive, ugly and hard-to-read list on the front page? DESIGN: ERUM SHAIKH

I tried to be objective; I tried to look at it neutrally, but let’s face it, Pakistan’s official government website is a disgrace.

Building a website isn’t really very expensive and we have plenty of talent here, then why is the website in shambles? Well, I think the main reason is because incompetent politicised government employees made it and they are not bothered to put forth something that represents the brilliance Pakistan is capable of.

Let me walk you through what happens as you hit www.pakistan.gov.pk

The first thing that hits you is the speed of our official website; the website’s load-time is embarrassingly slow. In addition, image loading takes about seven to eight times longer than on websites like Facebook, The Express Tribune and WordPress.

Even if one compares the load-time to the time taken by incredibly obscure sites like Murree Online, the website that represents our country still lags behind.

The very last thing I expected to find on the official website of the Government of Pakistan was bugs and glitches. Yet, I was disillusioned to find that I was wrong.

As you can see in the picture above the code hasn’t been abstracted from the user which the standard practice for web development. I was dumbfounded at the fact that such level of incompetence could be found on our official website.

Does the website of a democratic state really need a religion section? It’s not like Pakistan is a theocracy… or is it? What’s worse is that there is absolutely no mention of any religion except Islam in the religion section of the website. Pretty hypocritical,  if you ask me, for a country that has a white strip on its flag purely to acknowledge the existence and rights of religious minorities.

I don’t think mentioning the fact that other religions also practised in the country would offend anyone or harm the ideology of Pakistan but our official website deems minorities too minor to take in to consideration.

Why not create some decent menus or guides instead of mindlessly dumping all the services the website has to offer in a dated, unattractive and hard-to-read list on the front page?

Having thoroughly searched the page and not found what I initially came here for, I am distraught and disappointed. I did not expect this from a country which boasts IT geniuses.

It is my plea to the government to hire qualified web-developers and represent our beautiful country the way it should be!

Currently preparing for his A Levels. He is fond of Mathematics, Blogging, Computer Programming and Writing. Liberal, leftist and a big fan of Mark Twain and Jules Verne. He tweets @Inter_Hacker twitter.com/Inter_Hacker