Vital Signs: The soundtrack of my memories 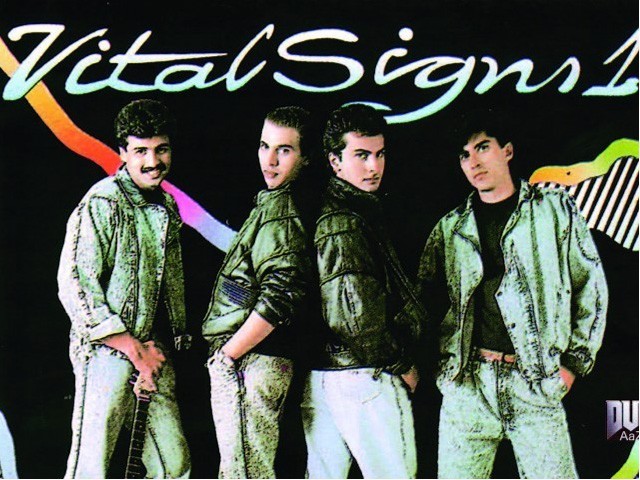 I remember the first album by Vital Signs, released by EMI with each band member on the cover picture, wearing jeans and leather jackets. PHOTO: PUBLICITY

Talking to one of my old friends, my pal of 21 years, and sharing some pictures from 1994 to 1998 with him, something really interesting struck me. My memories have a soundtrack.

In simple words, each time I think of my school and college life, I hear background music; beautiful melodies of the days gone by but fresh in my memory forever. And not surprisingly, all of them are from the one and only, Vital Signs.

It was in the fall of 1987 or ’88 when I first heard Dil Dil Pakistan. A school friend came to me one morning during break-time with her fancy new ‘walkman’ (remember those? Such a status symbol from the yester-years they were). Excitedly, she pranced towards me to ask,

“Did you hear Dil Dil Pakistan?”

And like all boys of that age, trying to be funny in front of a girl, I said,

(Trust me, it was really funny back then! Ok… maybe not.)

By evening I was humming the tune of that song and by the next weekend it was on the lips of every Pakistani. Within a month it was our national anthem and to this day no other patriotic song has ever been able to replace Dil Dil Pakistan.

That was the genesis of Vital Signs. It was also the dawn of a new era for pop music in Pakistan.

I remember the first album by Vital Signs, released by EMI with each band member on the cover picture, wearing jeans and leather jackets. I am one of the few people perhaps, who still owns that cassette to this day. (The new generation may have to look up what an audio cassette even looks like.) Those were the days when things were not so direct and open between school going teenagers. Even if you were in a co-ed school, there would always be a “Chinese wall” between the guys and the girls, and if anyone ever found out about your secret crush, well, the jokes made at your expense by every kid and even the cleaning staff at school would definitely ‘crush’ you.

So music was one of the simplest ways of communicating your true feelings to a girl (sitting in the third row on the second bench!). Playing or humming Chehra mera tha, nigahen thi uski was the best one could do in hopes of passing the hint. Their rendition of the famous Red Red Wine in the form of Samjhana was one of the most romantic tracks during those days and it still sounds great even today.

Even to this day, when I walk out on the streets in cold weather, Yeh shaam and Baatein, Puraani Baatein play in my head, reminding me of a cold, foggy morning when we were preparing for the “ Youth Festival” at our school, in regular clothes. For the guys and girls to get to see one another in colourful clothes that were not the uniform was always exciting; even though we dressed in baggy trousers and floral shits (yes, I know it was a fashion disaster).

The words Hum Tum Jahan Miltay Thay Wo Rastay Kaisay Bhula Payenge (How will we ever forget the paths we took to meet each other) trigger so many memories, stored deep within the vaults of mind that it always surprises me how people and faces can come and go in life but moments stick to us and survive the destroyer called ‘time’.

For their second album, I remember going from shop to shop in Dubai, trying to find just one copy since it sold like hot cakes. Everyone was humming Naraz Tum and Sanwali Saloni and getting your hands on that album was a matter of loyalty – loyalty not just towards the band alone but to Pakistan itself. How can you be a Pakistani and not own the new album by Vital Signs? Finally getting that cassette and playing it over and over  in my dad’s car, while driving along the beach, is a personal treasure. My favourite song from that album was Hum Rahe Raahi – another song from Vital Signs after Yeh Shaam composed in Raag Yaman.

I am one of those Pakistanis-by-birth who never got to live in Pakistan. I have not really seen Pakistan apart from Karachi and bits of Lahore and Murree. But like millions of Pakistanis, I have seen it through the eyes of Vital Signs in the iconic Geetar 93 videos. The most ambitious project in those days by Pepsi and the legendary Shoaib Mansoor, it was kind of a docu-drama of a pop band’s journey through Pakistan. From the Kalash Valley to the deserts in Tharparkar; from icy glaciers in Skardu to the alleys of old Lahore, Vital Signs took me and so many others like me to all these places with their music as our companion.

I have always hated going to music concerts because I feel it’s a waste of time and money. People are hardly able to get close to their youth icons and celebrities, unless they pay a fortune; the music is almost always buried beneath the noise from the crowd and moreover, the singers are always off-key and bey-sura when singing live. But one concert stands out in my memory; it was one of the first concerts by Vital Signs in Dubai and it was sheer magic.

Junaid Jamshed was never a perfect singer but his strength was the fact that he knew his limitations as a singer and the credit goes to Rohail Hayat for that. His music arrangements, use of right scales in the songs and compositions created this magic. I remember the excitement of the crowd that included not just Pakistanis, but Arabs, Indians and even some western expats living in Dubai. The euphoria that Vital Signs created was unheard of during those days in Dubai where the arena could not accommodate so many people and scores of fans stood outside (just) trying to listen to their heroes singing Dil Dil Pakistan, Goray Rung Ka Zamana and Aitebaar.

In 1995, Vital Signs came back after a gap of two years with Hum Tum. Their third album in 1993, called Aitebaar had broken all sales records in Pakistan for any artist, and the expectations were huge. Hum Tum, their fourth album was one of their most accomplished and finest musical works. Heavily influenced by Pink Floyd and Led Zeppelin, it showed the dark side of Vital Signs; very different from their usual “soft, sugar coated music. I fell in love with the tracks Hum Tum, Un Ka Khayal and Deir Ho Gayee.  It was also the first time when Amir Zaki showed off his skills with the guitar along with Vital Signs and the result was mesmerising.

And just when I thought that “this is the beginning of a beautiful relationship” (famous lines from Casablanca), Vital Signs dismembered.

Salman Ahmed by then had already established himself in Junoon. Rohail continued to hold the fort for Pakistani pop music establishing the finest, state-of-the-art recording studios in Pakistan. Shahzad played every now and then in various gatherings while Amir Zaki went solo. Junaid Jamshed, the face of Vital Signs enjoyed great success as a solo artist initially before opting for a completely different path in life – of religion and spiritual search.

The fans kept speculating about a re-union and although some band members did come together for one-off projects, the dream of seeing Vital Signs all together once again, doing what they are best at, still remains a dream.

No one can take their place in Pakistani pop history, just like no one can replace The Beetles or The Doors in the west. Memories of those songs and that era are ever-green.