Why do some mothers want to hurt their newborns? 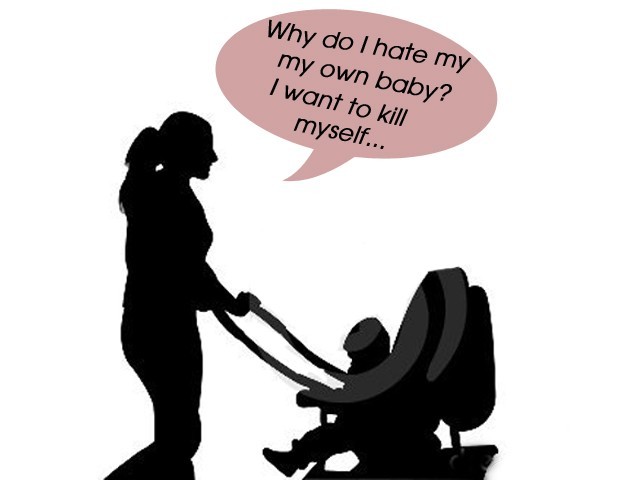 Experiencing Baby Blues is very common world over, but in Pakistan, women refuse to admit that they may be suffering.

New motherhood is no picnic. The indignity of childbirth, stitches in unmentionable places, the physical marathon of labour, the month-long bleeding and more. It doesn’t matter how easy your pregnancy was or how much you wanted a baby, the reality of motherhood usually comes as a bit of a shock.

It’s impossible to overstate the major lack of sleep and the sheer exhaustion of looking after a newborn. Struggling to feed a newborn every two hours, cleaning sticky newborn poop and worrying as they inevitably get jaundice is all part and parcel of the deal. Add major hormone fluctuations as your body winds down from pregnancy and it’s easy to see why up to 80% of mothers experience the so called Baby Blues.

Baby Blues usually set in between three to ten days after the baby is born and can leave mums feeling emotional, anxious and weepy. For most women the blue mood passes away within a few days but for others it’s only the tip of the iceberg as postnatal depression (PND), also known as postpartum depression, sets in.

Every woman’s experience of PND is different. The symptoms range from sleeplessness and loss of appetite to panic attacks. A lack of energy, feeling of guilt and indifference to the baby are common. Some women can also have recurrent thoughts of death or suicide.

Fatima Khan suffered from PND after the birth of her son.

Fatima stated that, “I would look after him but I had no feelings for him at all, other than irritation when he cried and relief when he was asleep. I felt so guilty – where was this immense love you are supposed to feel?”

Fatima was edgy and irritable all the time. She rapidly lost weight as she had no appetite and this started to impact on her milk supply, which left her son waking for feeds earlier and earlier every night. She felt guilty all the time.

Postpartum depression has gradually become less of a taboo in the west with celebrities, such as Gwyneth Paltrow, going public with their own experience of the disease. In Pakistan, however, it is rarely acknowledged as a genuine illness. There is little awareness despite evidences from several studies which indicate that 24 to 42% of new mothers in Pakistan undergo PND.

A study by the Department of Family Medicine at Aga Khan University in 2009 found that economic status, family structure and education had no impact on whether mothers suffered from PND. Rich, poor, in joint families or not, all were equally susceptible. The factors that did contribute to PND were a history of abuse, stressful life events, a family history of depression and a traumatic delivery. Mothers were also more susceptible to PND if their baby was unwell or had problems breastfeeding.

Having a baby in Pakistan is already complicated by a whole lot of old wives tales. Each community, be it Punjabi or Sindhi or Memon, has its own diktats about what a new mum should and should not do, in the period before and immediately after giving birth. Massages, ritual bathing, which foods to avoid and which ones to eat, to strengthen and increase milk supply, and how the baby should be bound – the list of rules is never ending. Surprisingly, none of the folklore addresses a mother’s mental health.

Fatima was lucky. She had a lot of support from both her mother and mother-in-law, particularly her mother-in-law who had also suffered from PND. She saw a doctor who prescribed anti-depressants and counselling.

“I felt a difference from my first session with a counsellor. I began to understand that I wasn’t abnormal and that I was suffering from a well-known condition. She helped me understand that it wasn’t that I did not love my son, it was just that my love was hidden under my depression.”

Unlike Baby Blues, PND can strike any time in the first year after giving birth. It is unlikely to go away spontaneously and generally needs treatment either with hormone therapy, counselling or anti-depressants. Further, there is significant evidence that the growth and development of a child can be compromised if the mother has untreated postnatal depression.

It took Fatima several months to recover from the PND. Her son is now 10 years old and she enjoys a healthy loving relationship with him. She had a daughter two years later and dreaded the same symptoms. The second time round she was aware of the warning signs and sought help early to assist her in coping with PND. She recommends that anyone who displays the symptoms of postpartum depression should seek professional help.

A freelance Journalist and opinion columnist who grew up in England and is an alumni of Oxford University. Salima blogs at www.karachista.com and tweets at @karachista (twitter.com/karachista)

Lessons from the past: The O-Level retake is in your benefit