Is fast-bowling a fading art? 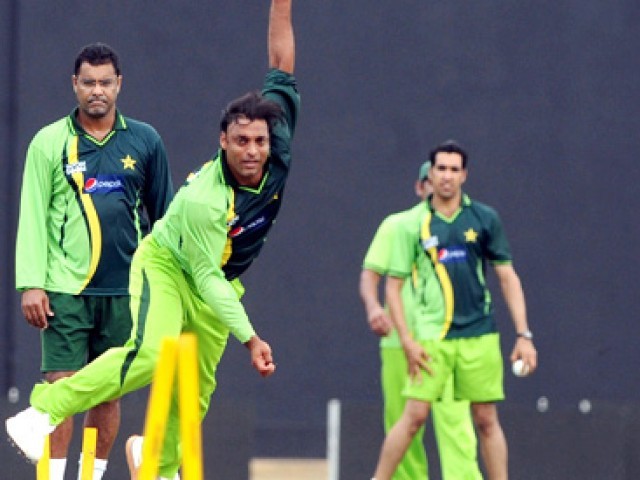 The fright of going for runs is one of the main reasons why a fast bowler hardly experiments with his length during his spell. PHOTO: AFP

Ever since I started following the game of cricket, the aspect that has fascinated me the most is the sight of a genuinely quick paceman running down from his bowling mark to rattle a batsman.

I still remember the day I entered a cricket stadium for the very first time – early 2000 – only to witness the run-up of the legendary Waqar Younis. Although I observed the craftsmanship of Wasim Akram as well, the swift yet smooth approach of the other ‘W’ mesmerised me the most.

I used to be hooked to the television screen just to see Waqar Younis running (rather sprinting) down to the bowling crease with the purpose to scare the hell out of the batsman. He did not only inspire me, but has also been an inspiration to the world’s fastest runner, Jamaican athlete Usain Bolt. Bolt says he was enthralled by the lightening-like sprint of this speedster of Pakistan.

Of course, Waqar Younis was not the only one who struck the fear of God into many batsmen; the time before and after him was also studded with terrifyingly fast bowlers. Recently, however, this high quality runner supply seems to have decelerated.

After Shoaib Akhtar, Australia’s Brett Lee has also hung his boots, which left South Africa’s Dale Steyn as the sole fear factor on the pitch to terrify even an all-guarded opponent standing on the other side of the pitch. The question that comes to mind, however, is what happened? Why this sudden drought in fast-paced bowlers? Have the new bowlers lost inspiration in the heroes of the yesteryears?

A young bowler with a speed of 145kph will not become an amazing fast bowler if even one of the following traits are lacking in him – agility, good form, athleticism, hard work and fitness, all paired with the finesse of a real sportsman. The player should be trained to take on a lot of workload and practice to be a top-class bowler – one who makes the corresponding batsmen sweat in fear with his speed and technique.

The newer lot of players is shying away from this beautiful yet demanding aspect, but it is not just players who are responsible for their sudden lack of interest in fast bowling; the authorities managing the game have also been contributing to this. The growing interest in Twenty20 format cricket has made the pacemen very vulnerable. This is because in this format, a captain prefers an all-rounder over a specialist; a fast bowler, or any bowler for that matter, focuses more on saving runs and is not useful to the captain.

Perhaps we should recall what captain Imran Khan used to tell Wasim Akram during the 1992 World Cup:

“Bowl as fast as you can. Don’t worry about the runs; I want a wicket from you.”

And now after 20 years, when we are breathing in a T20 era, I am sure no captain can exhibit the courage to push his fast bowler like this. We need to push the boundaries and give fast bowlers a chance to prove their mettle.

The fear of scoring more runs is one of the main reasons why a fast bowler hardly experiments with his length during his spell. This is why bouncers and yorkers – the main weaponry of faster bowlers – are becoming a rare sight now.

Some people also blame game rules and the dead pitches around the world as one of the major causes of the slow death of fast bowling, but I would say that rules for the bowlers have been more or less the same. The wickets – especially in the subcontinent – are in favour of the batsman or a spinner, yet Pakistan has been able to produce quality fast bowlers one after the other.

The T20 version of cricket also attracts a league of spectators who are more interested in witnessing towering hits and a flurry of aggressive strokes in a short game. In other words, players like Gayle and Afridi are more in demand. But what about the thrill and the exhilaration created amongst the spectators by a fearsome fast bowler?

I think we need to trust our fast bowlers a little more.

Seeking shortcuts has become the main cause of concern. Sadly, playing Test cricket is no longer as enticing as representing in a T20 league has become.

To preserve the game of cricket in general, the mushroom growth of T20 leagues should be checked and balanced, otherwise we will not be able to witness the likes of Thomson, Marshall, Imran, Lillee, Donald, Akhtar and Lee ever again.

Head of Sports section at News One TV and a TV show host of 'Sports One.' He has also worked with Business Plus and Indus TV. He tweets @twitter.com/mak_asif

What if Muhammad Amir was guilty even before the spot-fixing scandal of 2010?

Our heartbreaking hockey history: Do we have a future to look forward to?

Would you want Mohammad Amir back if he was not talented?