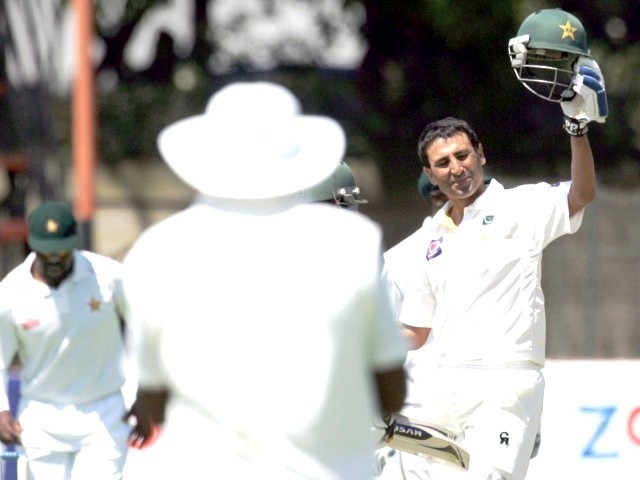 Can you even imagine where Younis Khan would be today if Pakistan played as many Tests as Australia, England, or India? PHOTO: AFP

When Younis Khan helped Pakistan out of a precarious situation in Pakistan’s second innings of the first Test against Zimbabwe, you would have known that you were in for a Younis Khan special.

When it comes to Test cricket, Younis Khan is arguably the best batsman Pakistan has produced. He always delivers when the team is in need, he is better than all when it comes to second innings performances, he saves Tests, he wins Tests and he is a team man. His exploits and relative standing compared to other batting greats of the game have been well documented. Now, we attempt to figure out where he stands among Pakistani batting greats, as well as the other modern batting greats.

Performance away from home

Everyone can score at home on pitches they are familiar with and where they have spent batting their entire life. The true test for a batsman comes when he is placed in unfamiliar conditions and tested by an unknown environment that requires him to adapt appropriately. A majority of the batsmen in this world have a better home record than an away record, but great batsmen have as good an away record as their home record. That is what distinguishes the greats from the good.

Younis Khan’s century in the first Test against Zimbabwe was his 22nd. He is still behind Inzamam (25), Yousuf (24), and Miandad (23), but more importantly, it was his 15th century outside of Pakistan, overtaking Inzamamul Haq’s record of 14 centuries away from home.

During his unbeaten double century against Zimbabwe, Younis Khan also became the second Pakistani batsman to score 5,000 runs in Test matches away from home. He is now only 66 runs away from Inzamam’s record of five 120 runs scored in Tests played away from Pakistan.

Another benchmark for great batsmen is how well they perform in matches won by their team, or rather how many matches are won on the basis of the particular batsman’s performance.

Sachin Tendulkar is notorious for scoring irrelevant centuries; those that do not help India win. In contrast, Inzamamul Haq is popularly known as the biggest match winner produced by Pakistan, as a majority of his Test centuries have resulted in Pakistan wins. Inzamam is leaps and bounds ahead of any Pakistani batsmen when it comes to match winning performances, but Younis Khan also sits proudly at number two for Pakistan.

Younis’ match winning 200 against Zimbabwe was his 10th Test century in a win, equalling Javed Miandad’s 10 Test centuries in wins. While it’s far behind Inzamam’s 17 centuries in Test wins, Younis averages in the 70s like Inzamam did.

During the course of his double hundred, Younis Khan crossed 3,000 runs in Test matches won by Pakistan.

Among all batsmen who have scored at least 3,000 runs in matches won by their team, Younis has the fifth best average; a true match winner!

Performance in wins away from home (excluding Zimbabwe and Bangladesh)

Many batsmen are often criticised for scoring easy runs on flat wickets at home or against weaker oppositions. Considering this, I believe that the ultimate benchmark for a match winning batsman is the performance he has given in Tests played and won away from home against a strong opposition.

Taking out Zimbabwe and Bangladesh from the analysis, Younis Khan comes out to be the best performer in Tests won by Pakistan away from home, with a Bradmanesque average.

When compared to other batsmen around the world, Younis Khan has the fourth best average in Test wins away from home. I believe that one can safely say that Younis Khan is not only one of the biggest match winners produced by Pakistan, but he is also one of the best match winning batsmen in the world. Among contemporary batsmen, only Alastair Cook has a better average than Younis Khan.

Note the kind of names missing from the above list – no Sachin, no Lara, no Ponting.

It really is a shame that Younis Khan has played only 25 Test matches since the start of 2009. During the same period Alastair Cook has played 61 Tests, Kevin Pietersen and Michael Clarke have played 54 each, and Sachin Tendulkar has played 42! Can you even imagine where Younis Khan would be today if Pakistan played as many Tests as Australia, England, or India?

He would have not only been Pakistan’s leading scorer in Tests, he would have been among the top five in the world!