The US at the G20 summit: Selling a strike on Syria 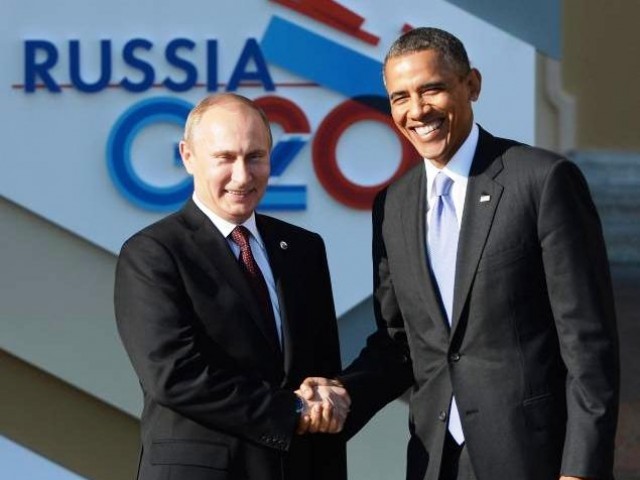 Obama’s administration has also chosen to ignore any evidence suggesting that chemical weapons could have been used by the opposition. PHOTO: REUTERS

The G20 leaders met in St Petersburg where Obama’s drive to strike Syria was on the top of the agenda. However, his ‘coalition of the willing’ is rather weak and much divided with Vladimir Putin resolutely against any military intervention without a resolution from the United Nations Security Council.

My fear is that this summit could be the final step before another disastrous involvement by the West in the Arab world. The similarities of 2013 and 2003 are startling. Just like 10 years ago, with regards to weapons of mass destruction in Iraq, John Kerry reassured the congress that the Assad regime is the one using chemical weapons because he has received signals from special intelligence that say so. No clear source has been mentioned or described which seriously questions this information, especially after the failure to find any weapons in Iraq.

Former US defense department analyst, Michael Maloof, has said that in his understanding, information from Israel was passed on to the US intelligence and that any such knowledge cannot be validated because of the absence of an alternate source and the lack of people on the ground.

One thing should be clear: in absolutely no case is the use of chemical weapons justified. But the idea that the proposed US military strike in Syria is driven by the moral outrage of the use of these weapons or because of the left wing, foreign policy lobby or President Obama’s concern for the Syrian people, is frankly, ludicrous. Part of the hypocrisy of all this is that the same ‘liberals’ and neo-conservatives did nothing when Saddam Hussein gassed and killed 5000 Iraqis and did nothing when he used chemicals weapons against Iran.

What the United States did with chemicals weapons also can’t be forgotten. Billions of gallons of ‘Agent Orange’ were dropped on Vietnam. The entire country was foliated and generations of birth defects were created. The United States also paid for the hundreds of thousands of clusters of bombs Israel dropped on Lebanon in 2006.

I want to believe what the United States foreign policy lobby says, but I can’t. I don’t like conspiracy theories and I firmly believe that this is not one. The vast majority of world leaders and the United States public oppose a strike on Syria by a factor of 90%. The United States, as they knew in 2003 in the case of Iraq, know today that there are no chemical weapons being used by the Syrian government, but every war needs a pretext. The US can’t say they want to occupy and dominate an oil-rich region; therefore the invasion needs a noble cause, such as protecting civilians in Syria or stopping weapons of mass destruction in Iraq. It makes no sense whatsoever that Assad would use chemical weapons knowing that it would be the one thing that could possibly trigger Western intervention in a war that he was winning. Assad had the advantage in the battlefield; he has international allies and even popular support. The only way he could possibly lose the upper hand was if the West intervened. Using chemical weapons against children and civilians makes no military sense.

Obama’s administration has also chosen to ignore any evidence suggesting that chemical weapons could have been used by the opposition. Putin recently presented a 100-page report to the UN containing the information that the chemical weapons used in Aleppo actually came from Iraq and were transferred to the rebels. The hype around the alleged attack on the Eastern Damascus suburb of Ghouta showed, “apparent attempts to cast a veil over the incidents of gas poisoning of Syrian army soldiers on August 22, 24 and 25,” the Russian Ministry said, adding that all the respective evidence was handed over to the UN by Syria.

The US government is telling their people that they can’t go to the UN Security Council because Russia would automatically veto any resolution, effectively using the country as a punching bag for getting what they want. Putin has said that once evidence has been presented, Russia and the UN will consider it, find out who is responsible for gassing who and come out with a resolution.

The United States, by taking the matter to congress simply seems to be trying to sell their plans. Congress does not have the right to pass illegal resolutions and then pretend that they conform to international law. Article 51 of the UN Charter, which the United States has signed (making it the highest law of the land) says, that a member state can only attack another member state in case of imminent self-defense. This clearly means that an attack by the United States on Syria is illegal under international law. But given the absurd situation today that the US has created, an attack on its own soil by Syria would actually conform to the law.

This statement would be enough to understand who is right or wrong. If only common sense prevailed.