Morning shows: Nothing more important than dancing and remarriage ceremonies? 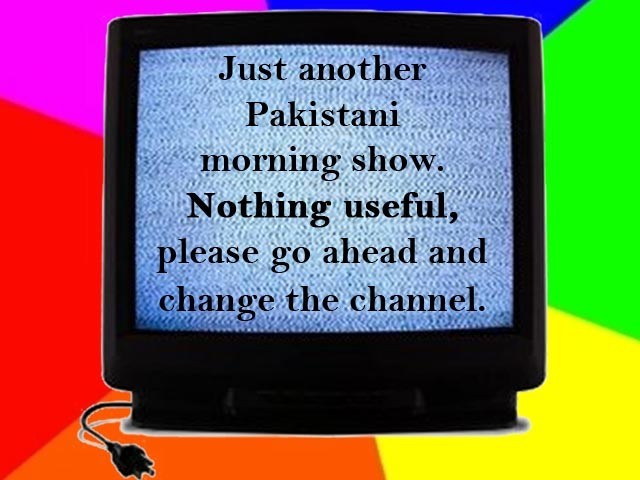 The future for these morning shows is dark, as they are escalating to every sort of madness thinkable, in this mad run for ratings.

Usually while watching the idiot box, I flip through channels and dwell upon a few for news, views and trends before continuing with my flipping exercise again. Recently, however, I had the misfortune of stumbling upon the repeat telecast of certain morning show programmes. The shows were so horrific in nature that I wished my TV remote had the capacity to erase the debacle taking place on my television screen.

The scene began with a female host, who jumped on the sofa from the kitchen counter behind, did a jumping jack act and finally sat down, all the while grinning, laughing loud and clapping in a frenzy. She then dashed to the middle of the stage to join in the hip hop happening, which was truly a sight to behold! Everyone on stage had their hips moving and hands dangling in the air to the beat of an Indian song.

The performers were continuously arranging their hair, and rearranging the folds of their gorgeous, glittering designer dresses and pushing right and left to catch the best frame shot. To add more fun and steam, young boys and girls were called in to join in the dancing and the show ended just as it began – with a lot of waving and yelling and jumping for attention.

This was perhaps the third show in a row where the guest list was more or less the same and I felt like I was watching the same programme during the three hour duration with different hosts. Cross-talk, back-slaps, shrieks and screams by the host and her guests was the norm of the show. The guests were running around and across from one seat to another, meaninglessly rattling, and causing a total cacophony on precious air time. The endless mehndi and other ceremonies for unmarried stars were an anomaly of its own, and when they ran out of these idiosyncratic ideas, they began planning the remarriage ceremonies of already married actors!

Am I the only one who finds this disturbing?

A couple of nights before, I saw a guest (from TV) literally take off her dainty sandals to hit a boy disguised as a girl who supposedly trespassed in an all-female party as part of the creative script.

And what do these high profile guests discuss, when they are not jumping around on the floor? Here is an example of that.

(Did Madeeha know how to make anything before she was married?)

(The only thing she knew before marriage was how to make a fool out of others.)

And with that the mother pulled out a hearty laugh at her own humour, as no one was listening— even the host, who has developed a short attention span over the years, was distracted by something sillier going on at the other end of the set.

This entire plethora of silliness was happening on, arguably, the most popular TV channel in Pakistan. It was hosted by rumoured-to-be the highest paid host for morning shows on TV. She has left her brother far behind, the self-claimed Shahrukh Khan look alike, philosopher, poet, singer, actor and host-on-another-TV-channel.

Not long ago, this pretty doctor-by-profession-turned-hostess was one of the more serious anchors conducting serious interviews on television. So, what went wrong? Was it the money? Money can be a great motivator for most. Or was it for the fame, popularity and ratings?

One is forced to question as to what future is left for these morning shows, which are escalating to every sort of madness thinkable, in this mad run for ratings.

An independent writer and editor who has done her degree in Journalism and has worked as an assistant editor (Herald), founding editor (TV Times, Travelogue, Glamour, The News magazines), and written for Dawn, Gulf News and Newsline. She tweets @samiqbal2010 twitter.com/samiqbal2010