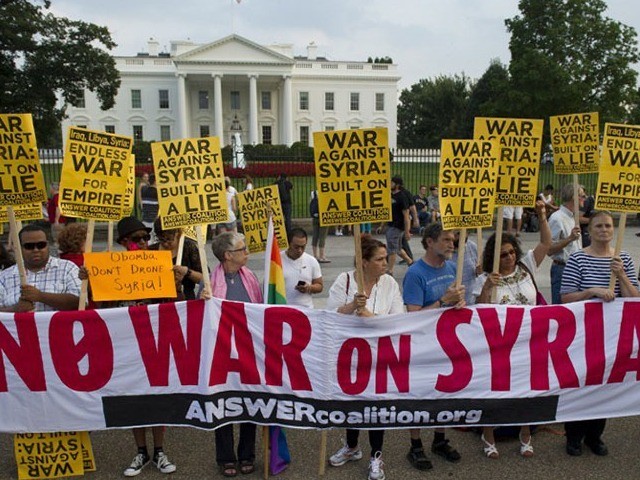 Demonstrators march in protest during a rally against a possible US-led attack on Syria in Lafayette Park in front of the White House. PHOTO: AFP

Mr Obama, you and I having a similar challenge: selling a military strike against Syria as a “moral imperative.”

But we have different audiences. Your constituents come from all parts of the country; mine from different parts of the world. Yours are driven by myriad interests; mine are simply seeking justice. Yours are young and old; mine are mostly teenagers. You call yours, “the US Congress.” I call mine “the Younus family.”

Mr Obama, my nephews and nieces, who live in Pakistan, Canada and elsewhere, buy the fact that Syrian President Bashar al-Assad should be ousted and held responsible for his reprehensible actions against his own people. But they are refusing to buy the moral argument for the United States to launch a military strike against Syria.

A bit of background: I have been the mouthpiece of American values to my family since I first heard the words, “with liberty and justice for all” at my children’s school, long before I became a US citizen. Hence, each time America bombed another Muslim country, I had to stand in for the whole nation, answering a barrage of questions from my teen-aged nephews and nieces via phone and Skype, questions which typically started with, “But how come you…”

I won some; I lost many.

The most recent question: “But how come you saw no moral obligation to intervene for two years while 100,000 Syrians were slaughtered, Chachoo (paternal uncle) ?”

“OK, Chachoo. We buy that,” one of them interjected from the corner of the Skype screen. “But how come you didn’t punish — but helped — Saddam Hussein when he used chemical weapons against Iranians in the 1980s?” (During 1983-88, Iraq used over 100,000 chemical munitions against Iran and its own Kurdish population, killing nearly 25,000 people.)

“How come you bombed Iraqis with depleted uranium in 2004 and received no punishment?” (Iraqis noted a 38-fold increase in Leukemia between 2005-9 as compared to 17-fold increase among the survivors of Hiroshima. Some researchers assert that children born to male veterans of the Gulf War were twice as likely to have a birth defect as compared to non-deployed veterans.)

Notice how I am held responsible for something folks like you decide, Mr Obama?

I was embarrassed, hoping for my Skype connection to crash. It didn’t (and neither did the intellectual assault).

“How come you sprayed nearly 20 million gallons of Agent Orange as a part of chemical warfare over Vietnam from 1961-72?” (Three million Vietnamese are still suffering from the resulting cancers and birth defects.)

“And how come you used white phosphorous in Afghanistan as recently as 2009, Chachoo?” And what about Napalm … and Hiroshima … and …

Help me Mr Obama. I am losing a moral argument to a bunch of teenagers.

Perhaps you wonder where they’re getting all of this, Mr Obama. The answer lies in your 2011 address to the US State department. You said: “Satellite television and the Internet provide a window into the wider world — a world of astonishing progress in places like India and Indonesia and Brazil. Cell phones and social networks allow young people to connect and organize like never before. And so a new generation has emerged. And their voices tell us that change cannot be denied.”

“Baita, we are not perfect.” I negotiate. “Come to the US and witness the degree of justice we enjoy. Despite being a Muslim and an immigrant, I get the exact same constitutional rights as any other American. I have more liberty and justice in America than many Muslims in their own countries.”

“That’s cool, Chachoo. But we thought you said America believed in ‘liberty and justice for all.’ Where is the justice for the millions of people who are at the receiving end of your selective wars?”

Bashar al-Assad committed a moral obscenity; no doubt about that. We should not do nothing; no doubt about that either. But the argument on moral grounds for bombing — and potentially worsening the lives of millions of innocent Syrians — is one I was unable to sell, even to a bunch of informed teenagers.

So what will that say about the US Congress if it buys the Syrian War resolution?