Chennai Express: A trainwreck of a masala film 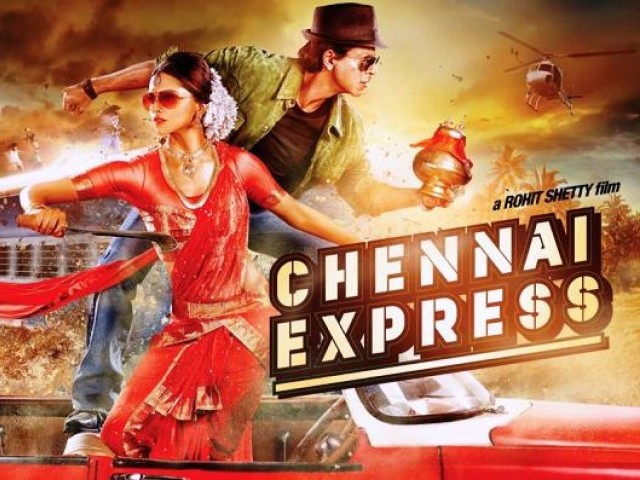 Chennai Express is paisa vasool; shamelessly masala, no pretense otherwise. The locations are absolutely stunning, the item number is decent, the humour hits the spot more than twice in 2.5 hours. Deepika, her acting and her saris are perfect, and of course the jodi works (mostly because of her). The music is ok, not Vishal-Shehkar’s best work this year, however, the Rajnikanth tribute stands out. But for all the pluses the film gloriously fails in the sensibilities category.

For a masala flick, it has two unexpected moments of intelligence. There was a good attempt at giving some depth to Rahul’s character (played by SRK) when Meenama (Deepika Padukone) calls him out for being selfish. Even though it goes nowhere, it was still refreshing. The second was Rahul’s passionate speech about how Indian women should not be celebrating India’s freedom, because they are not free to make their own decisions. As the whole village looked on, he beseeched Meenama’s father to let her choose and live according to her will – the father, a local don, wanted his daughter to marry a gangster to widen his hold in the area.

Then the filmmakers’ brain shut down (or maybe went back to ‘normal’ mode) and they proceeded to write in a 15 minute fight sequence in which Rahul fights the gangster almost to his death to “win” the girl. Only when the gangster concedes that Rahul may not be big but is brave and something to the effect of ‘you win’, does the father let go of Meenama’s hands. I am sure everyone’s patting themselves on the back for writing that one line and making such an epic case for women to be able to choose, but it would have been nice if they hadn’t gone back so quickly to their lovely misogynistic film tropes.

And gawd was the film racist; long haired, dark men growling as they run toward the camera brandishing machetes. Really?! It has been a while since the world caught onto racial stereotypes particularly one about unwashed tribals. It’s about time Bollywood figures this out and I am not even talking about the nonstop ridiculing of Southern culture and language throughout the film. Really, you are not celebrating Tamil culture by making fun of it constantly.

Apart from being racist and not very smart, the film is also completely unoriginal. It is everything we have already seen in other Bollywood films; there are references to almost every SRK hit, there is a ‘meet in the field away from family’ scene, there are lovely villagers who give refuge to a young couple, boy does honourable thing and doesn’t run away with girl and so on.

Kudos to SRK for making his character 40-years-old and then also joking about how he looks 50 (SRK is actually 47). But what was up with the juvenile humour between his friends (also men in their 40s) and him, and acting like a 20-year-old?

I suppose I am asking for too much; we should be grateful for small mercies.

Remember Aamir Khan actually trying to pass off as a 20 something in Rang De Basanti and 3 Idiots (weirdly all his friends were actually young actors)?

A writer, researcher and Bollywood lover who formerly worked at The Express Tribune. She tweets @RahmaMian (twitter.com/RahmaMian)