Hopeful: The story of my adopted disabled dog 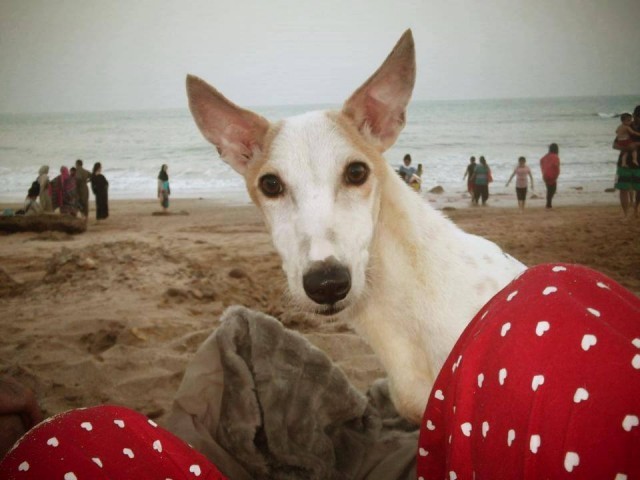 He had gone through agony everyday, with his unhealed wounds and his naked flesh on his hind legs. But with care he recovered and now he is a ball of joyful energy. PHOTO: Pakistan Animal Welfare Society (PAWS) FACEBOOK page

The first time I saw Hopeful I was shocked. Could anything look so pitiful? I was expecting a healthy dog that just couldn’t use his hind legs but what I got was a bag of bones with a protruding vertebra and red raw bedsores where the bone was visible at places. He was encrusted with months, perhaps years of faeces and smelled like a whole coop of hens. What really got to me was the thick rusted chain that was looped around his neck. For God’s sake the dog couldn’t even drag himself a foot away and here they had this prison chain dangling which only helped in getting tangled in his legs and tearing open his wounds further.

I had not come prepared for this; I hadn’t even told my mother. I didn’t care. I picked him up and away we went.

I will skip the details about my mother’s shock and instant love (both simultaneously) for Hopeful and the trail of poop and smell lingering around the apartment that day.

Hopeful was scared and withdrawn. He was willing enough to show his love, tentatively licking my hand whenever he could, but he tried to find the darkest corner to hide in, dragging his mutilated body under the bed or behind the sofa.

We tried to take care of his wounds as best as we could, with special help from Rubaba of Duke’s pet wheelchairs, who kept calling with amazing advice on Hopeful’s care and well being. I am grateful to them.

The only thing that kept me going as I dabbed his oozing sores with antiseptic was that at least he was paralysed and couldn’t feel the pain. However, Dr Isma, a veterinary doctor, told us otherwise. Hopeful was not paralysed. He was going through agony everyday because, after the accident, it seemed like he had just been thrust into a cage. His vertebra and paws had fused. She didn’t see much hope for him, though she gave him a thorough check up and did not even charge a penny for it.

My mother and I were traumatised. We thought euthanasia was the best choice. My friends came to visit him and they decided that it’s better to wait and see if Hopeful recovers. I am thankful to them for suggesting this to us and also for keeping a continuous check on him during his treatment. The moment Hopeful saw his room (yes, he has his own room) filled up with people, he was ecstatic! I saw a different side of him that day.

But his condition became better with time.

The quite cowering dog, of three weeks ago, gradually turned into this ball of joyful energy. He began roaming around, from one corner of the house to the other, with or without the towel I used to lift up his hind legs so he would know how to manoeuvre himself in his wheelchair. Every morning after his bath and pamper change, he would bring that towel to me so that I can sling his hind legs and take him for his walk.

He loves going for car rides, sitting like a king in his space behind the back seats where he can keep a check on all his subjects. He loves food in general and he adores chocolate flavoured fro-yo in particular. He loves it so much he will take huge licks and then nudge the cup towards me as an offering which I decline politely.

Like any dog, he loves chasing us to the door when the bell rings, making sure he sticks his face out from the crack letting the guest know whose house they are entering. He loves people. The more the merrier. He is quite the host and will make sure nobody lacks attention. He has found his voice again. Starting from a few experimental barks, he now volleys at anyone or anything that meets his disapproval, which could range from not sharing food with him to not taking him out when he wants to, and the list goes on and on.

Hilariously, however, his bravado is only for us. Hopeful is too scared to go into the corridor because he thinks he has seen another dog there, but it is actually his own reflection in the glass door. He is also scared as hell of the television (people in a box …what on earth!) and will flee from a room where the TV is on. But if we are standing behind him, then he will take comfort in the backup and bark at the TV, from a safe distance (just in case the people in the box step out).

His first day at the beach was also enjoyed though it was a bit overwhelming. Wearing his baseball onesie (one part to protect his wounds from the sand and the other to accentuate his good looks) he enjoyed the long ride to the French beach. I place him down on a soft rug on the sand, Hopeful took everything in quietly for five minutes, observing the waves and throngs of people, the camels and horses and other dogs, and then he turned around and hid his face under my arm. After coaxing him out, he sat and enjoyed everything but like a shy child he would go into a panic attack even if I moved away a bit.

This is the story of this miracle of a dog. His spirit and resilience continues to surprise us. He has gone through such pain which we cannot even fathom yet he hasn’t lost his love and trust in us, and although the work is hard, the love we get in return pays ten times over. Prayers are needed for his full recovery.

To support the cause of animal welfare, send your donations here.