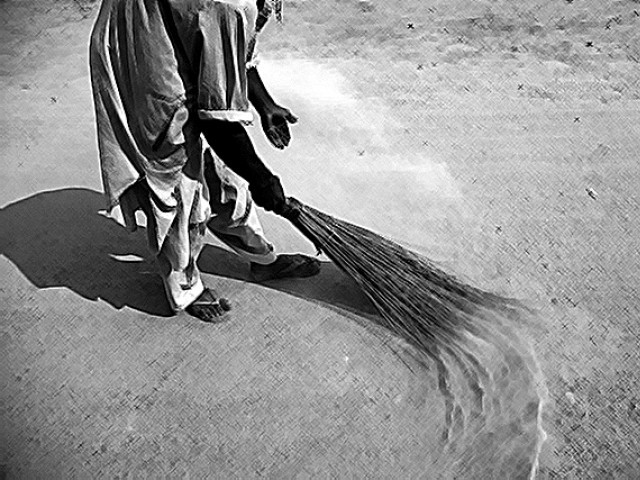 Masih, at 28, remains where he started out, a full time cleaner. In the charming words of our brethren, Masih, is a ‘choora’, a dreadful term.

Pakistan’s fertility rate is likely to drop if women marry at an older age: that argument stands on its own considerable merit, because a young woman is likely to conceive more easily and often at this most fertile time of her life, but other factors also contribute to the high fertility rate.

In Pakistan, children are not just a source of joy, but necessary pillars that support parents in the parents’ old age. This is true of all cultures, but it acquires an imperative urgency in societies like ours.

Insaan Masih is a young man of no education but an innate sense of what should be. He has taught himself to read and write to a rudimentary level. His wife, given child bearing and rearing, housework and a job, remains illiterate. They have two children in school. Both parents have made their children’s education their priority in a way that I have rarely witnessed amongst more educated persons, where I have also rarely witnessed Masih’s attention to hygiene and other things, such as punctuality. He rarely takes a day off, always working an alternate day if he cannot make it once.

In spite of these qualities, Masih, at 28, remains where he started out, a full time cleaner. In the charming words of our brethren, Masih, is a ‘choora’, a dreadful term.

I began to realise the extent of the problem only when Masih started to work for us and it seemed to me that our then cook had something against him. I could find little wrong with our new employee, unless you call his horror of working in a room containing strangers a problem. He is ashamed of the job he does, and I have learnt never to ask him to ‘quickly dust that corner’ if an outsider is present in the room.

Finally, the cook came out with it. He wanted me to get separate dishes for Masih.

We never, on principle, separate our utensils from our employees, but the problem of course was that Masih is a Masih (a Christian). I refused, and our cook separated his plates from ours.

Several non Muslims have visited our home, but never has our cook objected to sharing the crockery with them. They, of course, are white, so Masih’s was a case of caste racism with which Pakistan is riddled and cursed, nothing to do with religion which condemns such prejudice. Masih possesses a name that identifies him with a minority community. He also possesses dark skin, which to the average racist Pakistani acts the way a red flag apparently does to a bull.

I took Masih for his driving test today upon his request. He is so used to being discriminated against because of his poverty and religion that he wanted me there simply as a shield, which I tried to be. I helped him put together the documents required (the licensing process will be the subject of another blog), and so was able to share, to some miniscule extent, what the Masihs of this country go through every day of their lives. It made me cringe.

‘What is your name?’ the man at the desk barked at the young man at my side.

‘Insaan *masih*,’ the latter in a very small voice.

‘Masih? A Christian?’ the voice dripped with contempt.

The man at the desk turned to another man at his side, in police uniform. ‘He is a Masih. Where should he go?’

Not even the man in uniform knew how to respond to this question, which is probably why Masih was waved along to stand in line with everyone else. We encountered similar incidents several times.

I left when his documents were made, and later, Masih did not get his license; they failed him for a (very) minor question. He must retake his test.

Masih requires several half days for this process and money for transport, both of which are hard to come by for him. He is trying to better his position, which is possible if God wills it, but never if our countrymen have their way.

Masih’s job does not provide a pension, and one day when he and his wife are old, there will be no savings, given their salaries; the mere idea is ridiculous.

Who will look after them if not their children?  That the State might is an even more laughable expectation, therefore, the more children the better. I would be the same in that position.

This applies to almost all the people in this country, all disadvantaged one way or another, most of all by being subjects of a State which has failed to provide for its people any way you look at it.