The most shameful defeat in the history of Pakistan hockey 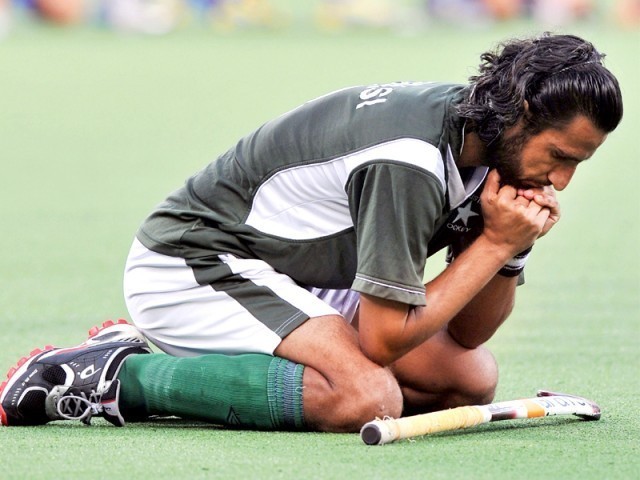 This defeat has marred Pakistan's reputation in the Hockey realm. Pakistan has a lot to change in order to get back in the game. PHOTO: AFP

To say that August 30, 2013, was the darkest day in Pakistan’s hockey history would not be an exaggeration. As the founders of the Hockey World Cup and four time world champions (in 1971, 1978, 1982 and 1994), it’s a shame that Pakistan could not even qualify to play in the 13th edition of the world cup matches this year.

This is a terribly painful situation for a team which had once been a master of this game. Pakistan had a smooth passage into the last four Asia Cup tournaments, which was refreshing for the nation but then, as it has been the case over the past few years, the team became infected with its “Korea-phobia“.

It is the third time in this year, following the Azlan Shah Cup, World Hockey League, and now the Asia Cup, when the South Korean team has deprived Pakistan from achieving the top three titles in this sport. Korea remains our strongest and fiercest contender.

No tangible or visible change was seen in the strategy or planning during the match yesterday. It seemed that the management did not pay much heed to formulating an effective game plan for this team – a team which already has a colourful yet nerve wrecking history of defeats on prior occasions.

There is a long list of factors which might have resulted in this tragedy to occur for our national team. These include a blatant exhibition of non-serious behaviour from the Pakistan Hockey Federation (PHF), dearth in long term planning, a fundamental lack of procedures or opportunities for new and younger talents to become part of the team, no efforts of having international matches on home grounds and frequent changes of coaching staff.

I believe all these factors were largely the reason behind the disaster faced by our hockey team.

PHF should be held responsible for the above reasons. The organisation is not playing an instrumental role to introduce or search for new youngsters, as there are no domestic leagues played in Pakistan for hockey. Hockey teams in schools and colleges are diminishing and the culture of playing hockey as a professional sport is also depleting. No effective steps are being taken towards making hockey popular amongst youngsters.

After every tournament and defeat, the PHF announces changes in plans and future aims, which shows a lack of systematic deliberation and strategy – there is no concrete plan and the players’ performance is strongly reflective of this. The coaching staff is changed after every tournament and every new coach has his own technique for the game. It obviously takes time for the players to excel in the so called strategy and just as the players begin to adjust to the new techniques, the coach and his staff members are replaced again!

Hence, even the coaches cannot be blamed for such terrible performances as they have a genuine reason of not being given enough time to train.

Why are we so deprived of coaches in a country which pioneered the game’s first global tournament and also has a long list of Olympic or world champions?

The team is in dire need of a sincere professional, who not only has experience of playing hockey but will also work for the uplifting and betterment of this prestigious game in Pakistan.

Sports psychologists can also be of help for our national team for mental and psychological rehabilitation and nurturing to cope up with this defeat. However, our federation seems to have no such plans of implementing this in the near future.

If we want to get out of this crisis, the government or the sports ministry needs to step in and administer the governing body as this sport is our national game and hence it is a symbol of our pride and presence which is recognised globally in sport circles.