Bring the Army to Karachi! 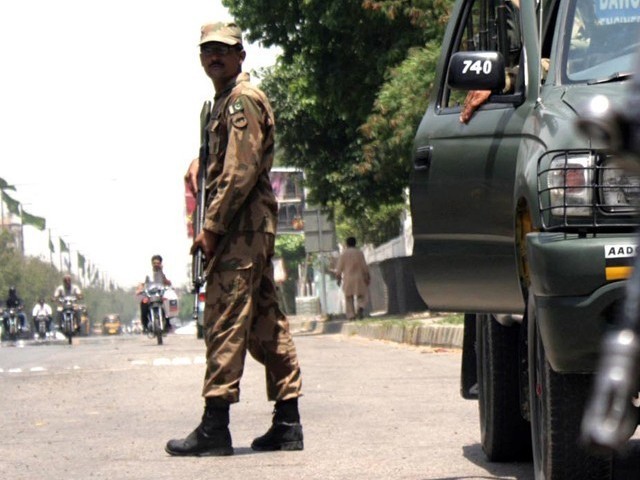 The Pakistan army is the only hope left and if given a chance, they can surely provide relief to Karachiites. PHOTO: INP

Recently issued statements by the Muttahida Quami Movement (MQM) chief Altaf Hussain and the subsequent debate on the floor of the National Assembly have brought forward a plethora of concerns for citizens of Karachi.

The ruling party, Pakistan Peoples Party, instead of giving hope and a plan to stabilise the worsening law and order situation in the city, has started pointing towards the 30-year-old violent history of this beautiful port city. Instead of showing resolve to eliminate criminal elements, the information minister for Sindh government, Sharjeel Memon, accused the MQM of hatching a conspiracy alongside the Pakistan Army. Allegations are countered with facts and figures — but here, it seems the government has strong ties with gangs operating in Karachi, which it doesn’t want to expose.

The chief justice, while listening to the Karachi unrest case at the Sindh registry of Supreme Court, commented on the complete failure shown by the law enforcement agencies and specifically took the Director General (DG) of Pakistan Rangers Sindh to task who had nothing concrete to say in his defence. The DG shifted the blame to political parties with militant wings, hence showing his inability to maintain law and order in the city, a response which annoyed the top judge.

Opposition leader in the National Assembly Syed Khursheed Shah has, however, termed this demand by the MQM a slap on the face of democracy. He says that police and rangers are fully capable of maintaining law and order in the city. The people belonging to the Kutchi community have suffered the most in the recent times. They were not only forced to leave the Lyari area but upon their return they were greeted with bullets and rockets by gangsters operating in the area.

The question then arises: is the Sindh Rangers capable enough to thwart unrest in Karachi?

The Rangers is often mistaken as a military unit. However, a defence analyst recently clarified on a TV talk show that the Rangers come under civil defence and cannot be considered as an equivalent to the Pakistan Army. In recent times, the powers of Rangers units stationed in Karachi have been curbed to a great extent due to political interference and taking away the authority to make formal arrests and carry out investigations. With their feathers clipped, even the most effective fighting forces become impotent and compromised. Out of frustration, these soldiers then become trigger happy and end up shooting down innocent civilians. Their role in law enforcement is therefore being viewed with suspicion.

Why has the police failed to perform?

Political postings and out of turn promotions have already demoralised able officers, hence compromising the performance of an organisation which is supposed to be solely responsible for the law and order crisis in Karachi. The police-led Lyari operation of April 2012 is another bad patch in the history of Sindh police where the entire operation had to be called off prematurely due to political intervention and which resulted in the death of some very competent officers.

The stand-off and the following withdrawal demoralised the police to a great extent. Similarly, a police encounter at Safari Park in the Gulshan-e-Iqbal area ended up on a sad note with casualties inflicted by the police. Surprisingly, some higher-ups in the police department cleared the names of the men arrested after the encounter as innocent bystanders. It was the CCTV footage leaked by media channels which blew up the whole story and pointed towards vested interests in the case. This again has demoralised the police who, after losing some of its best men, had to witness the guilty ones being protected by their own bosses.

So how can the Army deliver in Karachi?

The Pakistan Army is a disciplined organisation with great chain of command and almost zero tolerance for traitors and enemies of the state. If the army is given full authority and power to complete a task, it goes in full throttle and establishes state writ no matter what it takes. In the case of Karachi, the army should be given full authority to carry out raids, make arrests, try the criminals in military courts and dispense speedy justice which they are fully capable of doing.

Karachi has bled badly in the past and now it seems to be breathing artificially on a ventilator. The Pakistan army is the only hope left and if given a chance, they can surely provide relief to Karachiites.