For people living in Malakand, every drop of water is a struggle 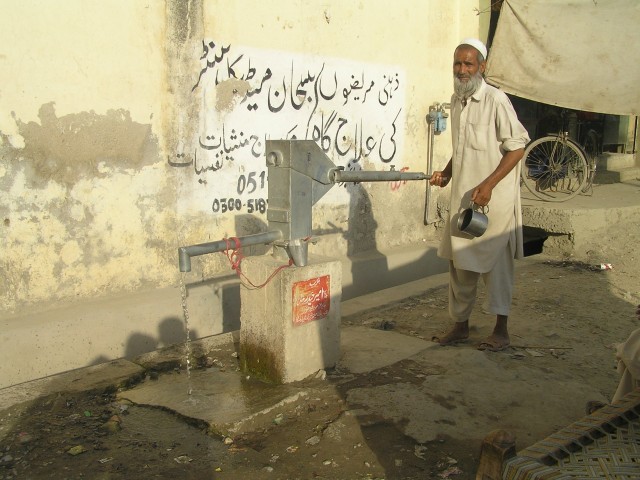 ‘We fill water continuously using the hand pumps but that can be very hectic and straining for us.’ PHOTO: JUNAID ALI KHAN

Imagine a place that has contrasting images of lush green landscapes with rugged mountains as a backdrop and multiple rivers flowing through its land, yet its people have little or no water to drink. Such is the life of the people in, the infrastructurally impaired but visually appealing, Malakand District of Khyber Pakhtunkhwa.

The district holds ample importance geographically, as it strategically acts as a gateway to Swat, Dir, Chitral and Bajaur from Peshawar. Keeping its importance in mind, many development projects have been discussed, planned and debated upon but few have seen the light of day up till now.

For the people of the district, terrorism was a major issue but now they are also suffering tremendously from lack of infrastructure and facilities – and one such deprivation is that of clean water for drinking and domestic usage.

The surrounding areas of the Malakand bypass include multiple residential colonies, where people have to scavenge for every drop of water they can find, either through rivers or under the ground via their trusty hand pumps. This dilemma is a result of inaccessibility of pure water to the residents, as the sewerage and pipeline system for the area is almost non-existent.

Government officials are usually keen on giving statistical data for everything, showing how much has been spent on what over the years, at least on paper. Therefore it came as no surprise when the Public Health Department official, Mr Muhammad Arif Khan, shared that Rs500,000 had been allocated from which a pipeline, two transformers and two pure water sewerage plants had been built and installed by the former provincial government, in collaboration with the Public Health Department.

These projects have not been of much avail to the masses. This was because the pure water sewage plant required constant and vigilant supervision, for which the government was unable to provide competent staffers and workers. A scheme was also introduced asking those individuals who had donated their land for the projects to come and work for the government and supervise the projects, but only few people became interested in this scheme, and soon enough the plant died down, stopping the water supply to the area due to inadequate human resource.

The residents voiced their discomfort in agony because there was no sign of water in the said pipelines, which were embedded two years ago. This was perhaps one of the many blunders which the former K-P government had made, making life more of a challenge than a blessing for these people.

‘We fill water continuously using the hand pumps but that can be very hectic and straining for us.’ said one of the residents.

The people hold the Awami National Party (ANP) responsible for their woes. The few pipelines which did exist in the area were either destroyed or stolen by thieves and hooligans, and the remaining ones have become homes to the local rats. Needless to say, there has been no official inspection from any government employee so far and the people continue to bitterly search for water.

‘It’s like we live in a jungle’, one resident protested.

The height of incompetence was when government officials were approached with this matter and they blatantly accused the public itself for the issue, stating that these people seem little interested in working for the project or taking a connection from the water plant, due to which the department stopped the supply. Later on, it was conveniently concluded that if the people really were facing major issues, the department would be informed about it and that they would then work on providing more pipelines to the area.

The Malakand district – with its scenic beauty and rich history – can be turned into a major tourist attraction. However, when it’s local people are facing so many crises and the government isn’t bothered, then how can anyone deem to establish Malakand as a tourist point?

Hence, for now the people have to live with their primitive ways to satisfy even their most basic needs while their government portrays itself as marching forward to a brighter, progressive future.

A news reporter from Mardan, who works and writes columns for Urdu dailies.