Attacked for wearing a Hijab: What is religious freedom to the West? 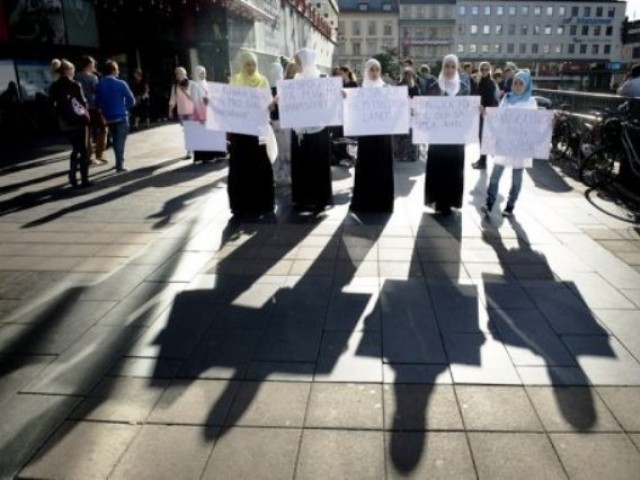 On August 16, 2013, a pregnant Swedish Muslim woman was attacked, because she donned the hijab. It was near midnight when this young woman approached her car. She was not only harassed with racial slurs and taunts, but was assaulted in multiple forms including her scarf being ripped off from her head.

This violence left her suffering from a concussion. The attack took place in suburban Farsta, which is in the south of Stockholm. Swedish police are treating the incident as a hate crime, though no arrests have been made yet. The attacker, a male, made what the Swedish media is reporting as “references” to the hijab.

Here is where semantics, language and word power play are manipulated by the media to temper and tone the ferocity of an incident. Let’s call abuse and assault an ‘incident’, an oppressive government practising apartheid as taking security measures, and a war for freedom in Palestine an Arab-Israeli “conflict”. The power of words is valued and keenly weighed by those in power; it is the masses that devalue them.

The reaction of the masses though is what is astounding. Social media is once again playing a massive part in creating awareness and protesting peacefully. The hashtag #hijabuppropet which means ‘hijab outcry’ is flooding Twitter with images of women donning the Hijab. It has created a Swedish movement leading to all females, regardless of race and religion, to wear the hijab demanding protection for their citizens and equal protection.

On Twitter, around 4,000 women (and counting) posted images of themselves wearing the hijab with the hashtag #hijabuppropet. One woman even posted an image of herself in a headscarf saying “I do not believe in any god, but I do believe n human rights”, showing that this hate crime united not only those with different faiths, but everyone with a conscience.

I am an atheist and I wore a hijab to work to support muslim women against harrassment #Hijabuppropet pic.twitter.com/gldmTpVQNe

One supporter, Hana Bektasevic, asks the all important question on a Facebook page:

“Why is it acceptable for a woman to undress half naked or go around town, but once a woman chooses to cover her body, it becomes a problem? It’s very brave and strong to dare to be different, even if it is against half the world! Great respect to all of you out there who dare to be themselves and seeks justice!”

The organisers of the “hijab outcry” demanded that attention be taken by Justice Minister Beatrice Ask to “ensure that Swedish Muslim women are guaranteed the right to personal safety and religious freedom, without being subject to verbal and physical attacks”. They also demanded “that responsible politicians actively draw attention to and fight the structural discrimination that affects Muslim women”. The justice minister is calling it an individual responsibility rather than admitting to “structural discrimination” which exists.

Alen Malik Crnalic was a practising Muslim man who didn’t shake hands with his employer because of his religious beliefs. “And now the handshake issue” was a rant published on March 18 in 2010. The fact that the author titled their article “And now the handshake issue”, only supports the propagated belief that there is an issue if a Muslim doesn’t shake hands with members of the opposite sex.

As a people, we need to stop pigeonholing people instantly by their attire or appearance; just because a male chooses to grow a beard it doesn’t mean he’s the spokesperson for the Taliban.

The fact that Alec was denied employment because of not shaking hands is not only outrageous, it is preposterous, especially in a country which is signatory to the European Convention of Human Rights. It would be ludicrous to suggest that because someone happened to live in a certain country of a different culture, he should give up his own beliefs and identity merely to promote peace and harmony, which isn’t being endangered in the first place.

The decision of the court should be applauded, which sets precedent not only for Muslims in such countries, but for people everywhere to learn that freedom of religion comes along with something else, often not understood by the people or highlighted by the media: respecting someone else’s religion.

While the entire spotlight is on the right to believe in a religion, there is no focus on regarding the consideration that must accompany such statements to be successfully implemented. However, the step taken by the Dutch people was baffling and amusing at the same time: because the Imam of an Islamic Cultural Centre refused to shake hands when he was invited to a seminar on cultural values of the Dutch. Then once again, he was approached to shake hands and lo and behold – he refused it. Of course he did!

Alen did not “create” any situation, if it was visible that the CEO felt insulted or humiliated as she claims (which led her to prejudice her judgment by unjustly using her power). It was Alen’s obligation to clarify that it was his religious belief and not a personal one that led him to not shake hands with the CEO.

Perhaps the assault on the young Muslim Swedish woman highlights that touting religious freedoms is all good for the west until it comes time to apply it. During the time of Alen Malik Crnalic our own media called it ‘making a mountain out of a molehill’. Wannabe liberals hypocritically avoided all rationale of equality they usually preached and claimed that Alen should’ve just shook hands and ‘gotten over it’.

Three years later things may have worsened since a pregnant lady was attacked simply for what she chose to wear. Without belittling or trivialising the horrific attack, from where I’m standing things have improved because the nation didn’t show solidarity with Alen, but they have for this lady and that is a step in the right direction for society and humanity.

If nothing else, at least the demonisation by the western media that Hijab is a symbol of oppression the world over is fading despite songs like “Burqa” from Lady Gaga doing its best to revive the now weary theme.

A photojournalist, wedding photographer and writer who is inspired by life and it's realities. She tweets @TwotwoAlys (twitter.com/aly2488)

Humanity check: Did you grieve Shia genocide as much as you did the Pak-India match?

#ShiaGenocide is a reality, not just a 'fab' Twitter trend