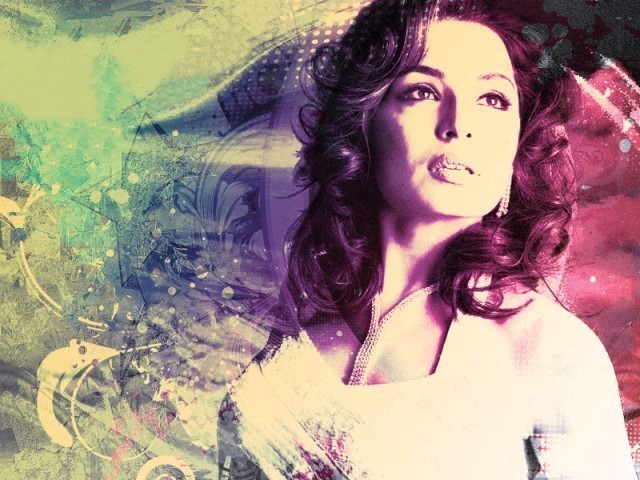 Haters are going to hate, but if the hatred is too hot for Meera to handle, how about she hire someone who’ll tweet her wonderful thoughts for her? DESIGN AND ILLUSTRATION : ESSA MALIK

In her own words, Meera began her career in the entertainment industry in 1995. In just 18 years, she has somehow managed to become an integral part of the Pakistani entertainment industry. Every other person on the street will know who she is. Hers’ is the kind of fame that has managed to transcend all barriers of class, sect and ethnicity. For the love of God, the woman got her own reality television show when she decided it was time for her to get married.

But somehow, we have all collectively managed to upset Meera. The fan-following and popularity isn’t enough. The XX-year-old woman needs more attention. In her latest attempt to make news waves, Meera has decided that she has had enough with all the jokes about her age and her English speaking skills (or lack thereof). Apparently, her recently released movie didn’t shift enough of the Pakistani population’s focus onto her. The ‘veteran’ Lollywood actress has now threatened to drag to court everybody who manages to offend her! Good luck with that Meera. It’s not like our courts have anything better to do anyway, right?

“I am taking my life very seriously now and want to build a hospital in Pakistan for my country-men.”

About time Meera, about time. But guess what: nobody cares.

We have bigger problems to focus on. And yes that’s a valid argument here. A couple of tweets and jokes that people probably forgot five minutes after they first read/heard them don’t damage anybody’s reputation as much as their own words do. And let’s not pretend Meera hasn’t enjoyed the attention all this time. She probably has more parody accounts on our social media channels than Zardari and Altaf Bhai combined.

People are mean. We mock, we judge and we joke. It’s in our nature and we do it only to keep ourselves entertained. Who better to entertain us than our very own entertainment industry’s artists? Especially when acting skills and scripts don’t seem to suffice anyway – any publicity is good publicity, right?

Haters are going to hate, but if the hatred is too hot for Meera to handle, how about she hire someone who’ll tweet her wonderful thoughts for her or even better, how about she stops using Twitter altogether? That way, us, entertainment starved Pakistanis, won’t get after her for every tiny error in judgment.

After that, she could continue doing what she is doing and we’ll do the same. System chal raha hai, chalney doh (A system is working in place, let it work). After all, by throwing random fits she is just giving us more reasons to ‘discuss’ her and since she has yet to display any serious intention of fixing her ways, I won’t even bother with that suggestion.

If this were a less pathetic situation, I would have asked Meera to continue doing the work that she is doing and ignore the ‘criticisms’ but as far as I’m concerned, this particular personality has yet to make any valid contribution to our society. If she were a smarter woman, she would have started taking her life seriously decades ago. (Does the decades reference count as an age-related joke? Oops.)

The writer is a sub-editor at the Opinions and Editorial desk at The Express Tribune.