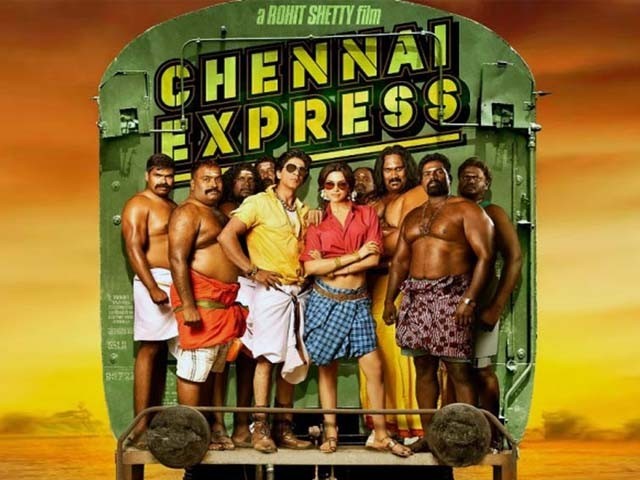 Director Rohit Shetty, who delivered hits like Golmaal 3, Singham and Bol Bachchan, brings together Shahrukh Khan and Deepika Padukone’s captivating chemistry once again to the big screen in the form of Chennai Express after the 2007’s reincarnation-romance hit film Om Shanti Om.

This light-hearted film is distinctive and has presented completely unusual avatars of Shahrukh and Deepika. To capture the heart of a moviegoer, Shetty successfully mixed all spices in a very balanced manner to present a complete family entertainment film with mindless comedy, drama, action and romance.

In the film, 40-year-old Rahul (Shahrukh Khan), a North Indian bachelor and halwai (sweetmeats vendor) who couldn’t get married due to his caring, over-protective and over-domineering grandfather, boards a train called Chennai Express to fulfil the last wish of his grandfather to have his ashes immersed in Rameshwaram.

On the journey, he meets a South Indian woman Meenamma (Deepika Padukone), who wants to flee from the clutches of her huge family and Tamil mobster father, who want her to get married to another mobster’s son, just to expand his territory.

The rest is the relentless blending of light comedy, tender romantic moments, drama, heroic action and dance – all in South Indian style.

If truth be told, Chennai Express is made in true Rohit Shetty ishtyle. The director has done his job wonderfully. The film moves from one scene to another with seamless pace along with clap-trap and witty dialogue that just kept coming.

The scenes are striking and very amusing. The, aesthetic cinematography by Dudley in particular is breathtaking and can compel a nature lover to fall in love with beautiful southern landscapes. The colourful, melodious songs shot in scenic mountains, are rich compositions by duo Visha-Shekhar. ‘Titli’ and ‘Tera Rastaa Choroon na’ are two particularly well written romantic songs in the movie. ‘Kashmir Main Tu Kanyakumari’ is another catchy tune in its almost old-fashioned melody. The film ends with a song tribute to Rajnikanth, the king of South Indian cinema.

Performance wise, both Shahrukh and Deepika did their job impressively; they are inspirational actors of Bollywood and here once again both performers excel in their characters. Throughout the film, Shahrukh’s performance is a zany and pleasing one. Totally immersed in Rahul’s character, he has delivered his best comic performance with beautiful timing – for instance, when he changes his facial expressions all of a sudden into ‘My name is Rahul and I am not a terrorist’.

Similarly, when Meenamma wonders if he is 50-years-old, an insulted Rahul reacts with a genuinely hilarious action. He stands out with his comical acting right till the end of the movie. Deepika Padukone comes up as a complete stunner and driving-force of the film. She provided the accurate momentum with her Tamil accent and colourful saris. Although her accent confuses audiences to some extent, Deepika allured everyone with her performance and compelling chemistry with the co-star.

Having said as much, the film is deprived of a persuasive script and has a superfluous comic sense. What I found most annoying was how the Tamil language has been extensively used in dialogues which non-Tamil speaking audiences couldn’t even understand as there were no subtitles. This was boring to watch and frustrating at the same time.

Yet, the movie does manage to offer the film buffs something to laugh about and that’s the core reason that helped the film to smash all previous records to cross $3.9 million marks. For serious moviegoers, though, it has too many loopholes, but it has something for everyone, which is why the mesmerising Chennai Express has emerged as a big hit of the year. It has proven that the Shahrukh + Rohit + Deepika combo is exceptionally enchanting that can create a new history in Bollywood masala films.

So go for a fun-ride on the Chennai Express if you want to just relax a little bit for next three hours!