Asad Mushtaq is a hero! Winning a Sword of Honour isn’t easy 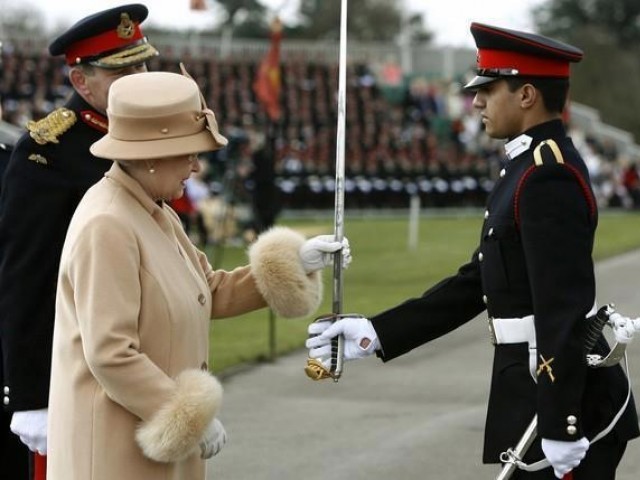 The Queen awards the Overseas 'Sword of Honour' to the Pakistani Officer Cadet Ahmed Raza Khan in 2009. Cadet Asad Mushtaq won the Sword on August 9, 2013. PHOTO: THE TELEGRAPH/FILE

The Royal Military Academy of Sandhurst, founded back in the 18th century is part of the British Army which works as an officer training academy. It takes around 10% of its cadets from overseas and is one of the oldest military academies in the world that has seen iconic figures such as Sir Winston Curchill and our very own, Field Marshall Ayub Khan.

Pakistan’s Corporal Asad Mushtaq, on August 9, 2013, not only graduated from this institution, but also bagged the highest award present there – the Sword of Honour.

As an overseas cadet, attendance at Sandhurst military academy is only possible by an arrangement with the army of the country of residence and it is, without a doubt, considered a huge honour to be selected for military training at this prestigious academy.

The Sword of Honour is the highest award that any cadet can receive here. This award is given to the cadet who is deemed the best by the commandant, on the basis of performance during the training. It is pertinent to understand that training at the Sandhurst academy is of the highest quality and is extremely competitive. It has elements of theoretical as well as practical military operations. Pakistan’s Ahmed Raza Khan won the sword back in 2006, followed by Muhammad Talha Zahid who won it in 2012 and now Mushtaq won it this year – a true moment of pride for Pakistan.

As someone who grew up in a household that has traditionally been part of the armed forces, I have heard stories about military manoeuvres and academic achievements. The one aspect which always stood out in these stories was the high level of reverence and respect given to the Sword of Honour award. For someone to be part of the armed forces, albeit the Army, the Air Force or the Navy, being considered even as a nominee for the Sword of Honour is a matter of great prestige within itself.

Winning this award can safely be termed as the biggest achievement for a young officer’s career.

So when I read that Mushtaq won the Sword from Sandhurst, I understood what he must have felt at the time. To be presented with the sword by the Countess of Essex and to feel that sense of pride surging through his body as sheer adrenaline, all his training and hard work had finally paid off – and in the best way possible.

Training at this academy is not for the ordinary Joe. All aspects of your mental and physical limits are tested here The cadet who excels in all four terms in the military subjects, academics, physical training and who displays good leadership skills, staunch discipline and also has the ability to take and deliver orders, receives this award. Moreover, the sword is given to the soldier who displays good military tactical sense. Thereby he stands above his peers for these achievements.

Some exercises that a cadet is made to perform include digging trenches (and you are not allowed to sleep before the task is finished), 70 km hikes and so on. You’re allowed only 15 minutes for breakfast and mobile phones, facial hair and chocolate is strictly forbidden. Cadets have to follow this rigorous routine for a full year every day, without any breaks.

Suffice is to say that not everyone can achieve what Mushtaq did, as the amount of intellectual and physical capacities and resolve required to achieve this award is beyond measure.

I, for one, am in awe of these Pakistani cadets, who go to a foreign military academy which hosts cadets from armies all over the globe, and yet they are able win this award. This speaks volumes of the sort of capability Pakistan has.  They, thus, deserve a high level of recognition and praise for their achievements- this is the very least we can do, right?

Mushtaq, who dedicated this award to his country, and is soon coming home to serve in the 57th cavalry of the Pakistan Army, is a hero, and I wish him the best of luck for an incredible future.

An economics student who loves ice cream, reading, Game of Thrones and cricket. He tweets as @ajzeb www.twitter.com/ajzeb

When giants come to play

Misbah is not responsible for our loss in the Champions Trophy