Pakistanis – as charitable as we are corrupt! 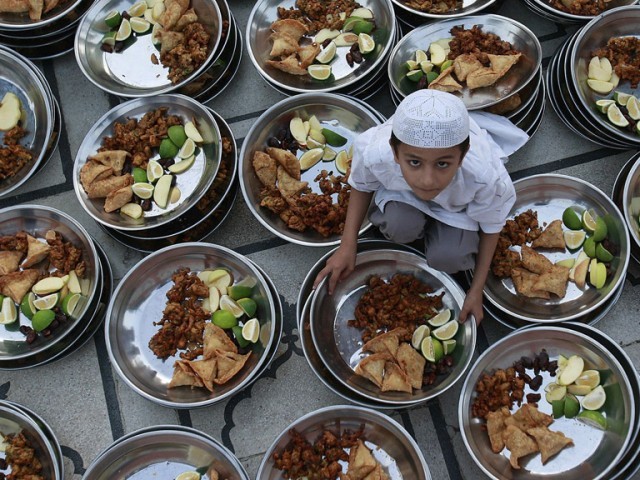 With every hurdle and disaster thrown Pakistan’s way, there is someone willing to provide relief and respite. PHOTO: REUTERS

What could I write about? I thought to myself, while taking a long drive down the smog filled roads of Sea View in Karachi, my birthplace and a city I keep returning to. Corruption, violence, poverty, slave labour, child abuse, acid victims, rape, gender discrimination. The possibilities are endless because we are an under-developed country with a plethora of topics ranging from the manic to the incredibly insane making lives quite exciting for photographers, journalists, documentary-makers and writers.

Then, something remarkable happened.

I was passing by one of the food stalls erected away from the beach area. A boy, barely eight-years-old, holding wilted rose stems in his hands was begging, his tanned face and sun-bleached hair plastered on the side window of a shiny, blue Honda. The tinted window zoomed down and a hand reached out giving the child a bag, which I could only presume was food.

It wasn’t that act of charity that warmed my heart but what the child did with the food that put a lot into perspective about my country of birth.

He swiftly saluted the owner of the car, turned on his heels and ran to a group of huddled boys, not that much older than him.

They hunched over what seemed like a few sandwiches and laughed with glee, putting tiny morsels of food into their malnourished mouths, as the sun set behind them.

This boy could have had all this food for himself. Instead, he chose to sacrifice his happiness and hunger by sharing with others in painful predicaments similar to his. Granted, they only received a few bites each, but the communal experience of sharing that moment was priceless for them, as it was for me.

Children standing in the rain by using an umbrella on a road in Karachi. Photo: Mohammad Saqib

At the end of the day, through all the misogyny, pain, intolerance and discrimination, Pakistanis and South East Asians on the whole have a lot of heart. We have a problem. It is a disease called poverty and since we haven’t found a complete cure for it, every single act of kindness and charity is a self-realised solution that can go a long way. Moreover, the art of giving is contagious and infectious. It spreads like wildfire and many look at it with a sense of moral obligation taking it upon themselves to further better the lives of the less privileged around them.

Another example worth mentioning here are the noble deeds conducted this Ramazan by a few charitable and conscious households. Families provided free Sehri (breakfast) and Iftari (food consumed at sunset to break the fast after a hot, laborious day) outside their homes, daily. This is no small feat. Beggars, homeless people, construction workers, even individuals employed in surrounding homes were invited to join in and consume food twice daily, free of charge.

A Pakistani arranges bowls of food before Iftar, the breaking of the fast, during the holy month of Ramadan, in Lahore. Photo: AFP

This kind of charity is not limited to the confines of one holy month. There are families that provide cauldrons of biryani and lentils to the poor and hungry once a week, whether outside their homes or at designated mosques and shrines. All are welcome to partake in the consumption of this food regardless of gender, race, religion or sect.

Houses across Pakistan install water taps near their gated entrances so passersby can stop to get a drink to ease and soothe their parched throats. Roadside cafes commit to providing a modest breakfast outside their place of business to throngs of people gripped with poverty. Almost every shrine across the country feeds the homeless and provides a cool place to sleep or rest on their rose scented marble floors.

I, myself, stem from a household that has been formed on absolute principals of living for others and giving. Every Thursday without fail, we unite as a family and distribute bags of meat and rice to anyone who is in need of food on the dark, littered streets. As soon as we run out of food, we provide little trays of milk to stray cats and dogs in garbage-infested colonies. This is followed by throwing grains of food to fish in the waters of Netty Jetty (Native Jetty) and finally we leave bowls filled with lentils for birds in various parks around the city.

Doing this consistently, as a family, has strengthened our sense of compassion and keeps us sensitive to the needs of others. This has also been a defining factor as to why I am committed to combating pressing social issues in developing countries through volunteering and social work. Our family is not exclusive in this way of thinking. I know of many families that distribute blankets, food and clothing quite religiously to help all those in need. These families and individuals don’t do it for the fame. They won’t be winning any awards nor will their names be published in newspapers. Journalists won’t swarm their homes to interview them based on their kindness and they won’t be entered into a hall of fame. They are charitable, noble, humble and modest because they are aware that they have been blessed with a lot and these blessings attained must be shared.

It is worth mentioning that if you need to join a reputable, revered and philanthropic team of people, there are several charitable institutions that are doing tremendous work for the dwellers of Pakistan and they could always use an extra pair of hands.  Organisations like Khana Ghar, feeds the hungry, the Citizens Foundation runs 700 schools serving poor students, and Human Development Foundation builds and operates schools and clinics for the poor.  Not to mention the world-renowned works of the Edhi Foundation, that operates a non-profit ambulance service across the country.

Abdul Sattar Edhi, one of the finest Philanthropists of Pakistan. PHOTO: AFP

There is no doubt in my mind that this country needs work.  There are Pakistanis living here and abroad that are a complete exception to the biased norms, dedicating their lives in their own profound and unnoticed ways to contribute to the country’s well being. With every hurdle and disaster thrown Pakistan’s way, there is someone willing to provide relief and respite.  This is the primary reason the country is still alive and kicking and will continue to do so as long as a feeling of mutual, communal, love and kindness is maintained.

One way of instilling moral service toward the less privileged is to target wealthy demographics in private schools and make social service a mandatory part of the curriculum. Visiting old age homes, jails, orphanages, shelters for the destitute and centres for the mentally disabled can offer the future generations of Pakistan a kind and compassionate way of thinking while bridging the gap between the various classes.

As I was writing this piece I received a beautiful text from my father.  It is a quote by the Dalai Lama and I would like to share it with my readers as a closing statement: