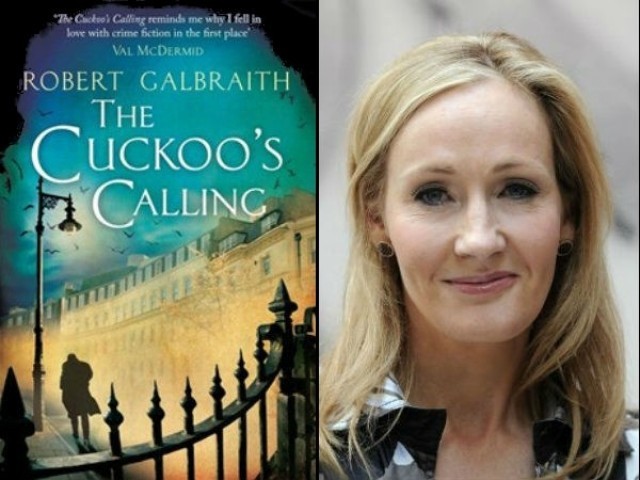 The Cuckoo’s Calling by author Robert Galbraith was doing an average business. Since April, 1500 copies had been sold, until it was leaked that the crime novel was actually written by none other than the queen herself, JK Rowling (JKR)!

The leak propelled the novel to number one and reprints were ordered. Her fans (including me) was ecstatic and did all that we could to get our hands on The Cuckoo’s Calling.

As it turned out, the book didn’t disappoint at all. However, JK Rowling has expressed her anger because she didn’t want her false identity as Robert Galbraith to be leaked to the media, she enjoyed the liberating experience of writing under a pseudonym without any hype and expectations, according to her.

The Cuckoo’s Calling is a crime-detective novel featuring Cormoran Strike as a private detective who has been hired to investigate the apparent suicide of super model Lula Landry. Together with his newly hired secretary, Robin, Cormoran has to navigate through the dazzling world of fashion, paparazzi and waddle across the murky marshes of destitution, drugs, alcoholism, and racism. This is a novel that brings surprises at every turning, but not without some diligent detective work by Cormoran Strike, which to some readers might get a bit tedious to read.

The chemistry between Cormoran and Robin develops wonderfully but leaves a lot to be desired. The good news is that Robert Galbraith (JKR) already has completed the second book, in what appears to be a series.

Essentially, the book is a continuation of JK Rowling’s crusade against media hacks, paparazzi, and the snobbish elites of the society. Exploitation of individuals who are misunderstood by the society is a major theme in the novel. For example, Evan Duffield who is Lula Landry’s boyfriend, is believed by nearly all characters in the novel to be a spoilt, drug-addled human being, but later, he is revealed to be complex character who is as much susceptible to human fallibilities as any other person and who is misunderstood by majority of the people around him.

One thing that is becoming the hallmark of her novels is her embracing of the populist theme. That is something to which the reader from the lower classes of the society can easily relate, no matter which country he/she may belong to. The depiction of the mutual disgust which both the rich and the poor have for each other is well written. The novel’s strongest moments in my view comes when detective Cormoran Strike interacts with an impecunious mother who has to give up her child for adoption in a rich family so that the child can have a better future.

JK Rowling, it seems, has a well-entrenched revulsion against the apathetic hereditary rich and those who get rich on the corpses of others. This loathing has been there in all the seven Harry Potter novels (the Malfoys) and The Casual Vacancy (the Mollisons) and now has spilled into her ninth novel has well.

However, aside from politics and directing the odium against the useless waste of human intelligence which we normally call celebrity journalism, JK Rowling’s novel is a fantastic read. Despite the information overload in some parts of the novel, the plot development is well paced and you feel that the curtain on the villain will be lifted at the very end of the novel in a dramatic fashion and all mysteries will be resolved.

Though there is nothing spectacular about the novel, as the crime genre has been well trodden before, the book will find its way to your bookshelf but probably not on your favourite books list.