Why do the Karachiite-type men fall for Punjabi women? 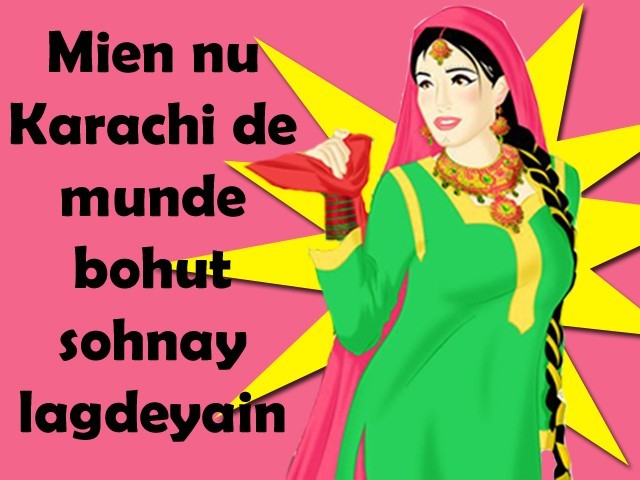 Punjabi women are loud, they love food and do not hide who they are.

I begin with the disclaimer that this blog is not for three kinds of people:

1. Those who have an issue with the sweeping generalisations I am about to make in the spirit of fun, though parts will be definitely based on truth and years of research-based observation.

2. Ladies who are non-Punjabi and take the title as a jibe against themselves, and say to themselves “what does she mean? Don’t men like non-Punjabi women? She doesn’t know what she’s talking about! I know my husband would never be able to do with a Punjabi woman… they’re so loud!”

3. Punjabi women who, well, have ended up with the “non-Karachiite-type” thaith (pure), purely Punjoo men.

Ok so, it just me or do you see it all around you? Out of the inter-provincial, inter-cultural marriages, engagements and other stuff, as a Karachiite I have always seen non-Punjabi men falling for Punjabi women. I, on purpose, used the term “Karachiite-type” men, but to be more specific, we can use the term “Urdu-Speaking” men. So why do Urdu-speaking men keep falling for Punjabi women? Especially considering the fact that many stereo-typical terms are associated with Punjabi women: Loud, tacky, dominating, laraaki (ready to fight), big in size and again, loud.

We seem to forget, generally, the beautiful, slender, groomed and talented Punjabi girls who are quite the norm. It seems like the image that comes to our mind when we say “Punjabi girl” is a large-sized female in a colourful laacha, helping irrigate Pakistan’s agricultural lands by jumping in the fields trying to entertain a disinterested man, or eating a huge paratha dripping with ghee and yelling loud enough to make her lungs fall off on GT Road, screaming,

(“Don’t talk rubbish with me or I’ll break your face!”)

And yes, she is pretty, even though she is all of the above.

Yet, day after day, the civil, tameezdaar (well-mannered) and wonderfully peace-loving Karachiite (or Urdu-speaking) men fall in love with Punjabi women; and it’s not just them, the other provinces have joined in too, Sindhis, Balochs and Pathans.

The question remains “why”?

A few probable answers I discovered, after careful observation and asking around, are these:

“All my life”, said a friend when he was choosing a girl to marry at the ripe old age of 23, “I have seen my mom, sisters, cousins, aunts – so proper. They don’t laugh too loud. They talk in aap janaab. They wear light blues, pastel pinks and beige, and I am like that too, the subtle aap janaab type. So somehow, the idea of a colourful lady in red appeals to me. Who laughs to her heart’s desire and speaks her mind. You know, the phuljharee-type (firecracker-type).”

“Phuljharee-type?” I asked him to confirm I had heard correctly.

“Yes yes. the phuljharee, titlee type (the firecracker, butterfly type). For a change you know,” he affirmed.

That’s when I somehow understood it. The firecracker butterfly fun brand actually works for a lot of men. That does not mean other provinces and ethnicities are bereft of phuljharees but maybe it is inbuilt genetic selection that men seem to like the “made in Punjab” variety increasingly.

“At least with a Punjabi girl, you don’t spend your life wondering what’s under the cool demeanour,” said another anonymous friend. (And yes, it is best that my informants stay unnamed, lest they face consequences at the hands of the non-Punjoo women in their lives!).

“She is who she is. Ghussay mein ho ya khush, kam az kam pata to chal jaata hai. (If she’s angry or happy, at least we can tell.) You know how we men are, yaar. We are bad mind-readers and women expect us to be just that. At least this way, you know that it is what it is, in your face. Jo hay wo hay (It is what it is). At least she’ll say it and not keep it in her heart for the next decade,” he said.

And that’s one general impression about Punjabis that yes, under the umbrella term “Punjabi” come people who are not afraid to be who they are; plus, they are less formal and more casual. Less takallufaat and formalities, and more of Lath Maar (kicking) stuff.

“For guys, it’s all about looks and Punjabi girls are mostly good looking. For me that is the single most important factor. As it is, I like her to be not stick thin,” said another informant.

With the package of the whole loud, khulla dulla ishtyle, comes a genuine spirited fieriness; being passionate, being feisty, humorous, hulla gulla (full of life) and fun.

“I’m telling you, the ‘wujood e zann se hai tasweer e kainaat mein rang’ wala shair (in the picture of the universe all the colours are from the female gender)  was written for Punjoo girls,” said one know-it-all, in his second year of a happy engagement with a Punjabi girl, while he himself has ancestors from Lucknow.

My two cents to my friend were: Make sure you know how to handle the fire, before you get scalded.

5. They are such foodies:

And men like food. So in a Punjabi girl, they dream of someone who will be able to share his excitement for puri bhaaji, nihari, gola kabab, kharay masalay ka qeema and biryani. She will also bring into his life the joys of aloo kay parathay, murgh cholay, sarson ka saag and makkai ki roti, and Punjabi pulao. She will understand the cliché that the way to his heart is through his tummy, simply because hey, the way to her heart is also through her tummy.