Javed Miandad or Hanif Mohammad: Who is Pakistan’s best batsman? 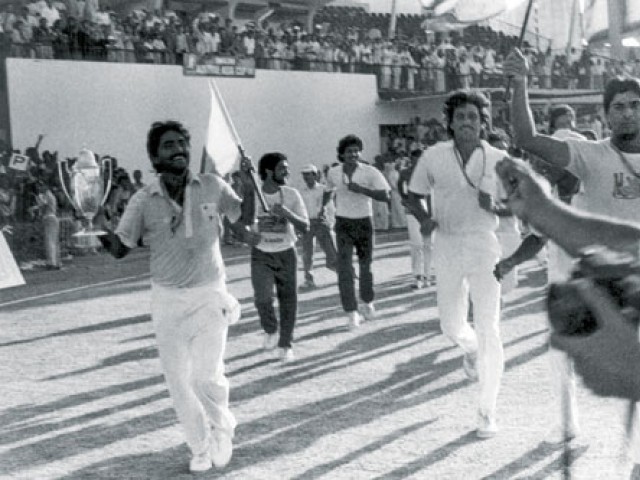 Javed Miandad celebrates after winning the match with a six off the last ball. PHOTO: ESPNCRICINFO

The Karachi Parsi Institute lies in the heart of old Karachi. It is hallowed ground, a place where history was made some fifty-four years back. On a sultry Karachi afternoon with a few thousand spectators in attendance, Hanif Mohammad crossed Sir Donald Bradman to record the then-highest first class score of 499, a record which stood for thirty-five years. The swaying trees witnessed much but nothing more precious than that nugget.

It was there, in the KPI Cricket ground where I raised the question of who is the greatest ever Pakistani batsman.

In the ensuing debate the names of Zaheer, Majid, Inzamam, Anwar, Yousuf and Asif Iqbal came up as the best batsmen for Pakistan. Disagreements abounded, but eventually everyone agreed on two names between which we must decide, names which represent the different eras of Pakistan cricket: Hanif Mohammad and Javed Miandad.

The two greatest batsmen from Pakistan and indeed all-time greats were not quite cut from the same cloth.

Prodigiously gifted and precocious, the one thing they had in common was the dogged pursuit of success and an endless appetite for runs.

Hanif was the gentleman of the old school who went about his business with quiet resolve and the temperament of a Himalayan glacier. Immovable, resolute, impregnable. It could be his upbringing in the serene surroundings of pre-partition Junagadh and the uncountable hours of practice on his bungalow’s terrace that gave Hanif his immense powers of concentration.

Javed learned his cricket in the rough-and-tumble world of road cricket and honed his game to become a street fighter in cricketing whites. His abrasive comebacks, panther-like running, swooping upon the cricket ball and tenacity in adversity spoke volumes about the way the game is played in innumerable streets of Pakistan. A mustachioed maharaja, he lorded over the opposition and in his pomp gave no quarter nor expected any.

Statistics bewilder and confound. AH Kardar’s “find of the decade”, Javed had a century at debut, the youngest player at the time to do so. He soon became the youngest batsman to score a double, a record held by George Headley for 47 years. Although not from the classical mold, he had all shots in the book and then some. His aggregate of 8,832 Test runs is a Pakistani record. His 23 centuries and 43 fifties were national records, until broken by Inzamamul Haq. His Test batting average never dropped below 50 and 52.57 is highest for Pakistani batsmen, as are his six double centuries. Javed was instrumental in many of the greatest moments of Pakistan cricket. Test wins in England and India in ‘87, drawn series in West Indies in ’88, World Cup ’92, all bear the stamp of Javed’s flashing blade. Then there is the small matter of the last ball six in Sharjah. The innings was a symphony of brutal hits and deft touches and ushered in an era of Pakistani domination over India until Misbah’s miscue in the 2007 World T20. Iftikhar Ahmed’s words “1 ball left, four runs required, …and it’s a six!” are seared upon an entire generation of cricket fans and many reprise it in fantasies.

But if Javed was a master class in snatching victory from the jaws, nay the very innards of crushing defeat, Hanif was a maestro of the rear guard action that would make King Leonidas proud. One of the most exciting things in Tests is a team fighting to save a test match. Think Akmal and Razzaq in Mohali 2006, Brett Lee and McGrath in Old Trafford in 2005 Ashes or Faf Du Plessis’ back-to-the-wall innings against Australia in Adelaide and you realize that a team fighting for survival makes for frightfully compelling cricket. In Bridgetown, Barbados, 1958 Pakistan faced a deficit of 473 runs with over three and a half days of the match to go.

Let those numbers sink in. Run your thoughts over the mountain of runs, an eternity to play, searing heat, uncovered pitches, foreign conditions, moving ball, a fast ball attack to rival any, no limit to bouncers and minimal protective gear.

In this crisis to end all crisis cometh the man who was to break several records over the next 16 hours and 39 minutes of flinty batting. Legend says that a man perched on a palm tree fell down, broke his leg, had it put in a cast and came back to the ground only to watch Hanif bat on and on. He also broke the record for longest innings and runs scored.

Hanif’s record making vigil was only a part of his exploits.

In the Lord’s Test of 1967, Pakistan were in familiar self-destructive territory at 99 for six in reply to England’s first innings 369 when Hanif entrenched himself for nine hours and only ended his stay at 187 when he ran out of partners while single-handedly dragging Pakistan to 354. The writing was on the wall when he announced himself in Pakistan’s very first Test with a 195 minute 20 to draw the match. His first Test century came in a relatively spry nine hours and in Pakistan’s first test against Australia he made 104 and 93 to save his team from certain defeat. In those early days, with no live TV coverage and the barest of media exposure, he seemed like a demi-god hewn out of granite who could face up to the lumbering titans hurling lightning bolts at him all day long.

Indeed, when Bradman met him after his exploits in Australia he expected a giant of a man and was pleasantly surprised to see a diminutive genius with a similar physique. Bradman promptly named him ‘Little Master’ and though there have been a few who have been given that appellation, the 5 feet 6 inch wall of unyielding mind and flesh deserves it the most.

In by a whisker

In the end it comes down to similarities. Both were named Wisden Cricketer of the year, Hanif in 1968 and Javed in 1982. Both are among the four Pakistanis who have been inducted in the ICC’s Hall of Fame. They played for Karachi and had a testy relationship with their captains. Their batting styles and on field aura may have differed, but both had the same fiery competitive spirit and a never-say-die attitude. Many a cricketing fan would want them both in their dream team for with Hanif you couldn’t lose a match and with Javed you knew you would win.

My vote goes to Hanif purely because of the lack of support he had in his time. Javed had the pantheon of Pakistan batting in his corner, artists such as Majid, Zaheer, Asif Iqbal, Wasim Raja to back upon. Hanif, was often the last man on the burning deck and all the remained between Pakistan and ignoble defeat.