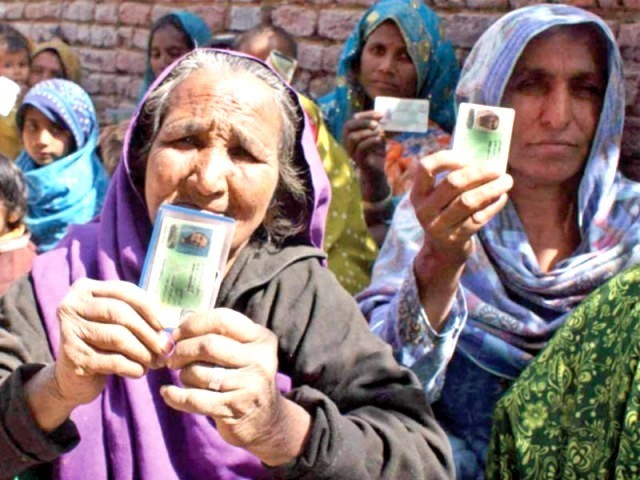 The elders of the jirga agreed upon not letting women out of their houses as it could damage their ghairat (dignity) and was totally against Pakhtoon culture. PHOTO: INP/FILE

Women’s suffrage is the right of women to vote.

In primitive societies, women have always been denied basic rights, however, the struggle to snatch what is theirs has never ceased. The movement for women’s suffrage started in France around the end of the eighteenth century and by the twenty-first century, there is no part of the world where women were barred from voting – except, of course, Pakistan.

Yesterday, much was happening in the country because of the by-polls, not only socially but also politically, as women from various areas of Khyber-Pakhtunkhwa were not permitted to go out and cast their votes. Reportedly there were dozens of polling stations for women, where not even a single vote was cast as the elders of the jirga agreed upon not letting the women out of their houses as it could damage their ghairat (dignity) and was totally against Pakhtoon culture.

What is even more shocking is that a few political parties were even supporting the decision of the jirga and tried to convince people who were of the opinion that women should cast the votes against this. A few local religious heads also declared that there is no need for women to come out against their values and cast vote, as their vote “doesn’t matter at all” and that “men can better decide the fate of the country” by choosing who to vote for.

Our country is an Islamic-democrat which means two forces are acting here: Islam and democracy.

It is totally beyond my comprehension to decide which of the two forces is against the basic rights of women. Islam gives equal rights to women in such matters and so does democracy. So where does the problem lie?

Does it lie in the wrong interpretation of religion? Or in the misuse of laws? Or in culture?

If it’s the latter, why does the culture feel threatened if women decide who to vote for and cast it?

By any parameters of reason and logic, it cannot be determined that voting is of any harm to the culture or a blemish on the dignity of the family. If the objection is on moral grounds, we are fully aware that there are many other things happening openly in our society whose immorality is well established. From brothel-houses to secret bars for men and all sorts of liberty with things that are strictly against religious, social and moral codes for almost all societies, are not issues for men. When men harass women at home and at the work-place, it never becomes a matter of honour. Also, when the same men stay back at home and let their women go out to win bread for the family and be exploited in many ways, there is no issue of cultural codes but when it comes to the basic rights of voting or education or even having an opinion of their own, the ghairat is seriously damaged?

When it comes to essays and debates, it’s very easy to chant that women are an equal and important part of society; they should be given respect and freedom and so on. However, it’s easier said than done. Unfortunately, when the time comes, the same culture which we take pride in, the same families which we serve all our lives, the same elders for whom we make every effort to please and comfort, stand in the way of women.

Let’s not be hypocrites and pick and choose at our own convenience. When we compare our country with the rest of the world in matters related to economy, technology and other facilities, we should also compare it in terms of basic human rights.

When for the others it is women’s suffrage, it should not be in any way “Women’s Suffer-age” in our country.