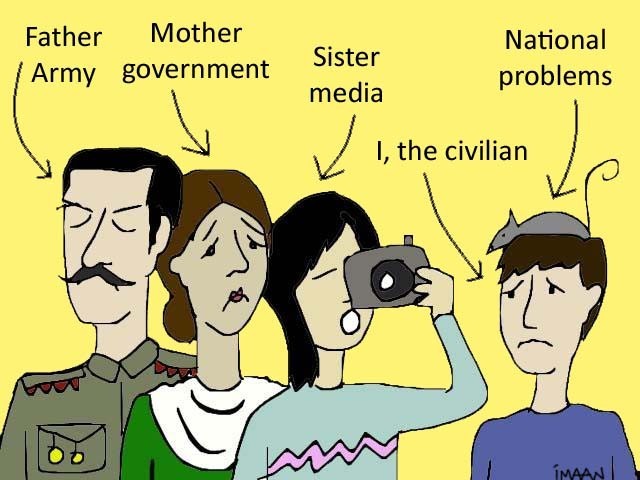 The family stands like a nation. ILLUSTRATION: IMAAN SHEIKH

The family stood by like a nation. Mother was the intelligence. She knew all that took place – how many people entered the house, when they came in and when they left. Only she truly knew the quantity and quality of ration and what kind of sustenance was needed at any given point in time. She was also the government.

Father was the army. He fixed leaks, changed bulbs and defended the territory from external threats. He was also the opposition. My sister was the media. She kept a strict check on the army and government. She was also the judiciary.

I was the civilian. I toiled hard and rarely confronted the army, government or judiciary. The government was kind and worried about me, but complained the army was lethargic and arrogant. The media and judiciary said they cared, but derived much amusement from my plights.

One day a rat managed to break in. No one seemed to notice it for the first few days, but as suspicion of someone tampering with the ration grew, the intelligence brought it up with the army. The army rejected the claims outright and said that the institution was being defamed. There was no imposter in its territory. The government wanted to take action but the opposition said it was acting in haste. The talks ended in deadlock.

It was not too long before the media got hold of the news and the civilian was informed, however, the the civilian did not feel for the issue too strongly. He did not think minor pilferage would do any significant harm.

A few more days passed before the matter could no longer be ignored. The imposter had had encounters with all. The civilian was also uneasy and the judiciary gave the government a deadline to nab the unwanted foreigner.

The army paid little heed to the government’s suggestions and acted arbitrarily, without success. The government and opposition were having a free-for-all – dragging in other completely unrelated issues to the main debate, thus derailing the actual process of dealing with the threat.

The imposter had, in the time the state was bickering, entrenched its roots firmly and multiplied in might.

In the end, there was no choice left. The fumigators arrived and delivered exactly what they had guaranteed – total annihilation. The mice are no more but the period of inaction still haunts the state. The media doesn’t let the others forget and there’s more than the occasional mention. The government then blames the army; the army blames the intelligence which blames the media. The civilian, fortunately, is not accountable for his apathy.