Ansar Abbas: The blast tore his arms but not his spirit 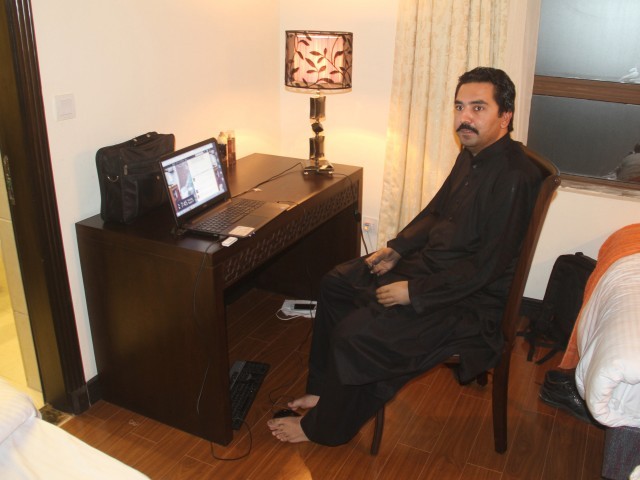 Ansar Abbas uses his computer with his feet after losing his arms in a tragic suicide attack. PHOTO: SHIRAZ HASSAN

Pakistan has been a hotbed of terrorism and militancy for almost a decade now. In this period of time, more than 50,000 people have become victims of terrorism with the north western areas being especially vulnerable to militancy and bloodshed. Many Pakistanis see the country’s future as dark and hopeless, however, Ansar Abbas is not one of them.

Syed Ansar Abbas, aged 30, is one of the many victims of terrorism that has plagued Pakistan. He lost both his arms in a suicide attack in Dera Ismail Khan. However, despite such a grave and life-altering tragedy, he is still hopeful and passionate about the days to come. With an indomitable spirit he says,

“I don’t like to be labelled as disabled or a victim”.

Currently working as a news editor with a news agency in Pakistan, Ansar is pursuing his career confidently and hopes to make Pakistan a better country. He also worked as a field monitor in DI Khan for PakVotes for the recently concluded by-elections.

The life of Ansar Abbas is a true story of hope and resilience.

He hails from the north western city of Dera Ismail Khan. Son of lawyer Syed Muzaffar Shah and youngest among his ten siblings, he belongs to a noble family in his district.

Ansar drew inspiration from his father, as he was well connected to literary circles. This also encouraged Ansar to take up Mass Communication as a subject for his Masters’ degree at the Gomal University, DI Khan. Having completed his Masters’ in 2006, he began his career as a journalist with a national daily.

Looking back in time, he recalls,

“I was passionate about writing since my childhood; my father was my inspiration, and hence I chose to be a journalist.”

However, as fate would have it, around five years ago his life changed forever.

On August 19, 2008, while in Dera Ismail Khan, Ansar came to know about a target killing incident in the city. He reached the district hospital along with other reporters where he learnt that the victim belonged to his family. Soon, many of his family members and others gathered at the hospital. There was a crowd of some 200 people there when tragedy struck; a suicide bomber blew himself up, resulting in a death toll of 32 people. More than 50 people were injured, and Ansar was one of them. He narrates how around 20 of his relatives and friends died on that tragic day.

Recalling the incident he says,

“I guess I was in my senses after the blast, or maybe I wasn’t, but I saw my arm cut off from my body laying in front of me.”

If this trauma was not enough, both his legs were also fractured in the blast. He was sent to Pakistan Institute of Medical Sciences (PIMS) hospital, Islamabad the next day for treatment, where he was operated on almost 50 times in six months. He recovered physically with the passage of time but lost his arms.

Ansar’s real arms were replaced by artificial ones which he cannot even move – such is the sorry state of prosthesis in Pakistan.

Yet, Ansar did not lose hope. He did not give up, and he moved on.

He says it, in a matter-of-fact tone,

“What had happened cannot be undone; it’s time to move forward, to live my own life”

And that is what he has successfully done.

He restarted his career in journalism with a renewed vigour. Though it took almost two years to fully recover, he started using the computer while sitting on a wheelchair at home, and he learned to use his toes as his fingers till he mastered the skill of typing with his feet.

Ansar started using social media and connecting with people from different parts of the world. He wrote blogs and articles narrating various incidents of terrorism in his home town, criticising the militancy and addressing terrorism related issues. Last year, he completed another Masters’ degree in Political Science.

“The internet gave me a new lease to life. I was not used to the internet earlier, but after this incident, it has opened new gateways to the world for me. Now I read news, write and edit articles. This is how I keep myself busy.”

An activist, Ansar Abbas is keen on working for social welfare. He, along with other people of his area, organises sports and other events for the welfare of Dera Ismail Khan. He is also helping an organisation working for disabled individuals, which once helped him too.

Incidentally, Ansar thinks otherwise; according to him, DI Khan was once known as the city of flowers. There were no sectarian killings among Sunnis and Shias in the past. He also believes that sectarian harmony among the local people still exists. He says that right after the the suicide bombing incident, the first person to donate blood to him did not even belong to his sect.

He goes on to narrate that DI Khan is home to the famous graveyard of Chah Syed Munawar Shah where not only the Sunni and the Shias bury their loved ones, but several Christians are even buried in the same grounds. Moreover, the mosque next to the burial ground is open for all sects and both the Shias and Sunnis offer their prayers in same mosque. He adds,

“That is an excellent example of sectarian harmony and I doubt you would find such an example anywhere else.”

Given from where he is coming, Ansar is not in favour of negotiating with the militants and also critical of the role of government and security forces to counter terrorism.

“If incidents like Bannu and Dera Ismail Khan jail breaks continue then how will we eradicate terrorism?” he asks.

Confident and hopeful that someday in the near future Pakistan will see peace again, Ansar pays a rich tribute to the people of Pakistan, who, in spite of countless acts of terrorism that devastate their lives, are still moving forward.

“Pakistanis are brave people and they will never let militants to takeover this country,” says Ansar, a proud, hard working Pakistani himself.

A Rawalpindi based journalist, blogger and photographer who tweets @ShirazHassan

How we went wrong with Rawalpindi

Am I a 'ganwaar' if I speak in Punjabi?

Kalyan Das temple: An abandoned shelter for the blind