DSP Qasim Ali Khan Ghouri: He was my baba and he died serving Pakistan 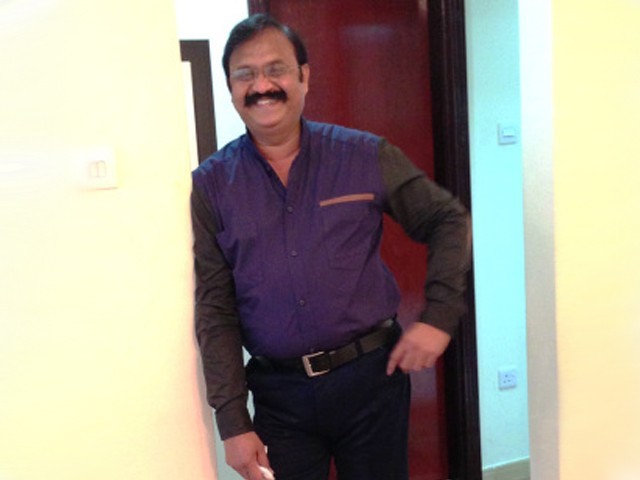 I believed that he loved his family the most, but evidently his responsibilities toward the nation came first. PHOTO: MINA KHAN

I’m writing this article in the memory of my khalu (maternal uncle), Shaheed Deputy Superintendent of Police (DSP) Qasim Ali Khan Ghouri, who was martyred at 8:30am on August 15, 2013. This is not meant to be a eulogy because no words are sufficient to express my affection and regard for khalu. I’d just like to share some very special experiences and lessons from my his life.

Lessons from a martyr

Khalu often used to express his deepest sympathies for the frequent martyrdom of policemen, but I never thought that, one day, he’d sacrifice his life for a policeman. I believed that he loved his family the most, but evidently his responsibilities toward the nation came first.

On August 15, khalu rushed to Safari Park Karachi to rescue the body of Assistant Sub-Inspector (ASI) Asif, who had been martyred by some dacoits prior to his arrival. When khalu arrived at the crime scene, policemen were waiting for Armed Personnel Carrier (APC), but he couldn’t let the dacoits takeover his police jawaan’s body. So khalu snatched his guard’s rifle and charged to rescue the jawaan’s body. But as is the case nowadays, the dacoits had more advanced artillery than our under-resourced police and they opened heavy fire on khalu. The dacoits shot him at least nine times, but khalu kept firing back at the dacoits even when he was severely injured. Long after khalu was shot, there was no sign of either emergency medical help or the APC.

When khalu was finally taken to a hospital, he embraced martyrdom after a couple of minutes. This was definitely not the first time that our ill-equipped policemen have tried to deal with heavily armed mafia members. It has become a normal occurrence in the lives of Pakistanis that a couple of policemen die every day, but what we fail to do as a nation is to appreciate the sacrifices of our protectors.

I’m very proud of my khalu’s brave attempt and whole-heartedly acknowledge the condolences of his well-wishers. I also deeply thank the police department for the esteem they accorded to khalu. In my heart, I have given my khalu and other martyred policemen all police gallantry medals possible because this is the least we can do for them.

I hope Pakistanis give the police force their due respect and that our police department gets the resources needed to avoid such dreadful and unnecessary loss of lives.

Lessons from a policeman

Amid my frequent discussions with khalu, we discussed that the police department is, of course not without its flaws. However, none of the problems are without solution and the departmental flaws do not take away from the sacrifices of our jawaans.

Khalu was of the opinion that the advice given by some police officers was often apt, and should be seriously considered as it is them who understand the problems with the system and know how to improve the department, and because, contrary to popular belief, a lot of policemen genuinely want to help the public.

He further explained that corruption may also go viral when senior officials want additional resources and the subordinates have to collect them to pass on. Therefore, it may not always be in their hands how funds are distributed but with our support, the face of the police force could change. It is imperative that we support our direly needed police department as it is the one that always steps up to fight criminal and terrorist groups, regardless of how under-resourced they may be.

Lessons from a caretaker

My khalu epitomised a fearless, responsible and caring person. He managed his 24/7 police duties and also took extremely good care of his extended family. He provided for everyone’s needs and luxuries, and was dearest to all who knew him.

For me, he was not only like a father, but also a friend, teacher, brother, driver, event planner and all other possible relations you could think of. With mamma and him, I never needed anyone else.

A teacher of mine told me that nowadays people are like caged chickens in butcher shops. When the butcher reaches out for a chicken in the cage, all chickens run away from the door further into the cage to save their lives, but never try to escape the cage even though they know that they will be butchered soon. In other words, the chickens run from their problem instead of attacking the butcher and freeing themselves. However, khalu was different – he single-handedly solved everyone’s problems, and remained calm during trying times. He taught us to take on others’ problems and solve them with the best of our capabilities.

In this article, I have tried to convey some of khalu’s priceless qualities and observations in order to inspire and motivate other people. It is, indeed, our beloved caretakers, policemen and martyrs who brighten our lives and strengthen our social fabric. I will also take this opportunity to call khalu my baba because that is the role he always played in my life.

A Physics and Mathematics undergraduate at Mount Holyoke College, Mina is interested in writing and research.