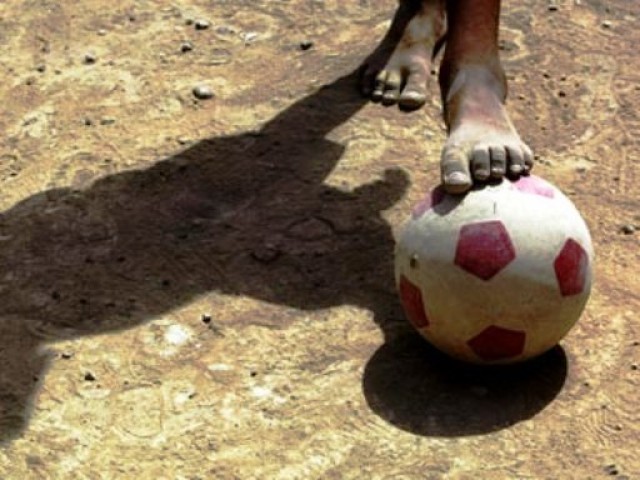 Patriotism is just a rare emotion coming from the people who have no power or stake in the politics of the country. PHOTO: AFP

This year, covering a sports event on August 14 changed my perspective on what the word ‘hope’ really means. I never thought that amateur football players belonging to the poor Hindu Marwari community could teach me such an important lesson, but they did. They were playing an exhibition match with the Muslim Marwaris’ on Independence Day and how they played for Pakistan!

The event that I covered is a mere news story; it can only serve the purpose of informing readers and cannot reflect the true emotions of these people unless you go out there and witness it for yourself. Their story is bigger and more meaningful than a bunch of listed statistics. Their passion for sports is not derived from selfish, greedy desires. These children were not playing so they could practice for some important upcoming game; they were playing because it was fun and because they had a mission.

That day, they weren’t just playing for themselves; that day, on that small dilapidated field they played for Pakistan and its people. They played because they understood, better than any one of us ever could, that the unity brought on by sports is only otherwise surpassed by war. They came together with the other children regardless of colour, class or origin to just enjoy themselves and celebrate Independence Day as best as they could in the means they could afford. Their story is that simple.

Some of them proudly and shamelessly told me that they were pretending to be Indians during the match with their Muslim counterparts; they didn’t seem to care about the label of being ‘Indian’ because it was entertaining and attracted spectators. That was their purpose and they served it just right.

Through these children I questioned myself, other citizens and our leaders – why aren’t we as patriotic? What has happened to us? What happened to our green spirit? Or was there ever any spirit to begin with?

I admit, I may have never considered myself an overtly patriotic Pakistani and I don’t know if I can voice the exact feelings I have for this country, but after interviewing these children, belonging to a Hindu community, I recognised a spirit I believe I must have once possessed.

Their view was that no matter how they cursed this country about the lack of opportunities it had in store for them as Hindus or as citizens, it was still their home and they had a responsibility towards it and its people. The lack of clean water, electricity and education are some of the primary facilities that are not available to them and yet, they stand patriotically tall. It is a part of who they are and they knew that their population contributes towards the diversity and richness of the culture of this nation rgardless of how they are shunned.

They emphasised that the coastal belt, where they have their settlements now, is the same place where their ancestors lived and generated business in Karachi even before 1947.Therefore, Karachi runs thick in their blood; it is still their sanctuary despite all the violence and social inequality.

I realised that they call this country theirs just like I call it mine; it’s not a choice, it’s a given and we are all one.

What struck me as especially remarkable was how they celebrated the inception of Pakistan despite the fact that this contry has given them nothing. I mean, that was the real miracle. These people were so grateful for whatever they had and held high hopes for a greener, brighter future.

They were convinced that prosperity or a general sense of happiness only came to those who were open to new ideas and not just labels. Collaborative efforts through sports can bridge the social divide, which can be a first step towards becoming a community, a nation, and finally a Pakistani. Sports erase labels like Hindu, Muslim, Sindhi, Punjabi, Balochi, Pathan or even Marwari and when those cease to exist- unity is the only way forward.

Many sports events took place that day, with athletes coming out for the likes of boxing, throw ball, basketball, arm-wrestling, cycling, and other smaller sports; these athletes were not given any incentive, they only had a cause and that was to show unity. A Gilgit-Baltistani volleyball player told me that August 14 was celebrated in Karachi just like it was in his village. He said for the athletes, sports are just a way of becoming a team, where ethnicity doesn’t matter. Sports are like a larger than life team building activity – devoid of any worldly influence of division.

Before stumbling on the football story, I kept wondering why these people were out in the rain, playing at venues with inadequate facilities where they can get injured and risk their lives over a match.

But then I thought,

“Well, it’s probably their love for the sport, right?”

But its more than that. They were out celebrating in the hopes of at least inspiring others. The athletes here showed up to the events despite rain and transport issues and despite their own limitations. They got out of their comfort zones and just played for themselves, for a part that they call ‘Pakistan’.

While the privileged class kept busy with their status updates or eased out on an extra holiday, these athletes managed to show that being Pakistani is more than just singing or playing patriotic songs and it’s definitely more than wearing a green badge on your shirt. They realised that this day was their opportunity to come out and motivate other people to participate in their silent cause of unity.

These athletes were patriotic because they belonged to that part of the population that doesn’t have money or sufficient resources but has the resilience and will to survive – something money can’t buy. They don’t have any high ‘connections’, or expectations but if anyone wants to learn how to fend for themselves in the real world or how to really celebrate Independence Day with passion, these are the people to learn from.

A change can come and someone will see their efforts someday.

Patriotism is a rare and powerful emotion.; it can even rile those people up who have no power or stake in the politics of the country. Yet, even they feel a strong sense of belonging and that is truly inspiring.