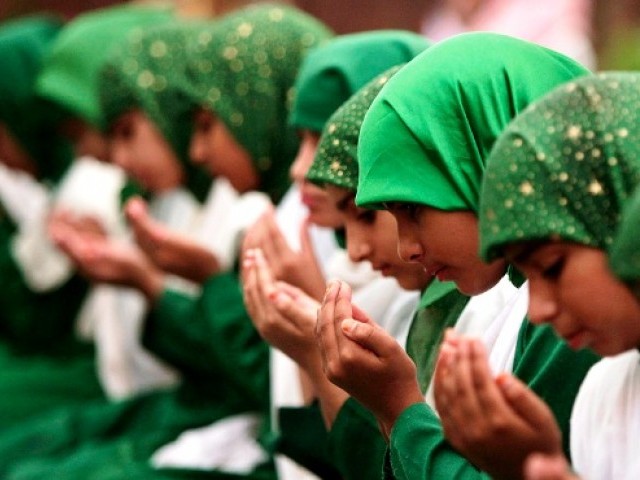 In the Indian subcontinent, ‘madrassas’ were the only educational institutes present and their significance was that they used to teach religion and worldly subjects side by side. PHOTO: REUTERS

“Those who do not learn from history are doomed to repeat it.” This is an oft repeated quote in relation to our current abysmal situation and it reminds us to look back and analyse our mistakes. Rather than a rhetorical piece about politics, I would like to write about an unsung hero, Allama Muhammad Asad and his ideas.

He was the man who was awarded the first Pakistani passport on August 14, 1947.

The Government of Pakistan appointed Allama Asad to head the Department of Islamic Reconstruction, a body made to align Pakistani laws, educational system and governance practices in accordance with the Quran. Born to a Jewish family, he converted to Islam and toured nearly all Islamic countries, giving them hope of independence from the shackles of imperialism.

Asad says about his finding of Islam,

“Islam appears to me like a perfect work of architecture. All its parts are harmoniously conceived to complement and support each other; nothing is superfluous and nothing lacking; and the result is a structure of absolute balance and solid composure.”

In a similar pursuit, he came to India and met Allama Iqbal who persuaded him to work on the governance structure of a new independent state for Indian Muslims. He published a paper, ‘Towards an Islamic Constitution’ just before independence and it was through one of his essays titled ‘Pakistan Ka Matlab Kia?’ (What does Pakistan mean?) that the popular slogan of independence emerged, which ultimately became the anthem of the nation at that time.

My reason for writing about him is to educate people about his unfulfilled desire to change the educational system of Pakistan to what used to prevail here before the arrival of the British.

In the Indian subcontinent, ‘madrassas’ were the only educational institutes present and their significance was that they used to teach religion and worldly subjects side by side. In most cases, there were more courses on the world than on religion, ranging from medicine, pure sciences, logic, philosophy, languages and mathematics to astrology. Before the arrival of Muslims in the subcontinent, such institutes were only present in Taxilla, belonging to Buddhists and they used to focus more on Buddhism with only a marginal presence of material subjects.

An important point to note is that it was the students of these madrassas who went up that ladder of success hardly achieved by others. The reason was their diverse knowledge base, comprising of both worldly knowledge and teachings of Islam, which used to complement the study of the material world.

One prominent example is the ‘Madrassa-e-Rahimia’ which was later headed by the preeminent scholar, Shah Waliullah. History shows that it was an Englishman named Warren Hastings, who in 1781 established a ‘madrassa’ in Calcutta for purely religious studies. This was a turning point, when religious and worldly education was separated, in an attempt to weaken our strong scholastic base.

Sir Syed Ahmed Khan, after founding the famous Aligarh University, came to a conclusion that religious and worldly education must be taught simultaneously. It was upon his insistence that the first reciprocal Exchange Program of India was established. Students from Aligarh were sent to ‘Darul Uloom Deoband’ of Sheikh Mahmoodul Hassan and their students came to Aligarh. The importance of this mix of education can be judged from the fact that it was compulsory for students to take part in this exchange program, without which they would not be granted degrees.

Had we not deviated from our path, we would have saved ourselves from the disaster we are facing now. We have bracketed ‘religious people’ as a separate identity and now, their duty is to call for prayer five times a day, lead funeral prayers, teach our children the Quran and to perform the necessary formalities of a nikkah.

This is the greatest dilemma of a country founded for Indian Muslims.

It was only through such schools that we got ‘Ibn-e-Sina’ who mastered in Medicine, ‘Jābir ibn Hayyān’ who changed the world of Chemistry, ‘Omar Khayyam’ a leading personality in the field of Algebra, and Ahmad ibn Hanbal, Imam Shafi, Imam Malik, and Imam Abu Hanifa who each headed four Islamic schools of thought.

So, where did the works of Allama Asad go?

Unfortunately for this nation, a few years after its inception, the Department of Islamic Reconstruction caught fire and all the work done by Allama Asad on education reform vanished. And so did the dream of a prosperous Pakistan I wish to see today.

Correction: The post earlier stated ‘on the request of Quaid-e-Azam’ which has been changed to ‘The Government of Pakistan’. The error is regretted.