Let’s do #14ActsForPakistan this August 14! 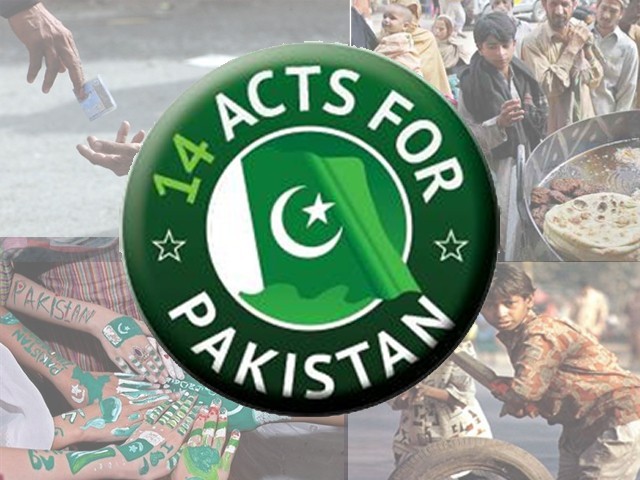 We had to do something to channelise all this positive energy into positive acts. That’s it, acts #14ActsForPakistan, this August 14.

This was a regular conversation for us as we sipped on our morning teas and chatted about how depressing it was to wake up so early. Perks of being in the Digital Marketing field, you can say. Yes, we take Twitter very seriously.

You can tell by the green and white décor and the sound of national songs resonating within the walls of our cubicles as August 14 approaches.

Anyway, we huddled around Ahsan’s laptop, peering over each other’s heads to stare at a blue hyperlink. The hashtag that was trending on top was Justin Bieber (JB). No offence to JB fans out there, but wasn’t the public supposed to be talking about nationalism and love for Pakistan at that time?

We as a people have the tendency to curse others for their acts. We judge. We condemn. We lament. We disapprove. But what we hesitate to do is do anything at all.

I don’t blame us, the words ‘change’, ‘revolution’ and ‘peace’ have become too clichéd for us. They have been politicised, abused and patronised.

We decided to start a trend; an Urdu trend. We named it #میراپاکستان. Sparked by only a few tweets from us, it blew up not just in Pakistan but all over the world. Within a matter of hours, it was trending worldwide as the first ever Urdu hashtag. We smiled at the success. Pakistan was not dead, Pakistanis were not dead.

But, at the end of the day, it was just another Twitter trend – words, not actions. We had to do something to channelise all this positive energy into positive acts. That’s when we started the #14ActsForPakistan, for this August 14, to promote doing certain ‘acts’ for Pakistan.

Write messages of Peace, Love and Patriotism and leave them at public places for people to pick, read and get inspired. #14ActsForPakistan

Hand out some candy to the child selling flags on the street. Throw a packet of juice to the random guy stuck in traffic, sweating in the heat and humidity. Gift a nice pair of sunglasses to that traffic policeman at the signal, controlling the boisterous rush of cars.

#14ActsForPakistan is all about peace, patriotism, help, love, give back, faith and hope !

The idea, although simple, received an overwhelming response from the public. It was, once again, a worldwide trend on Twitter with 1,500 contributors and a staggering number of 5,000+ tweets. People were curious, people were amazed.

We have a beautiful beach, lets not pollute it #14ActsForPakistan

We encouraged them to form their own groups of friends, take to the streets and do their own version of #14ActsForPakistan this Independence Day. Even our friends from across the border started talking about how they could do something similar for their own country.

This @14ActsForPak seems like a good idea. What 15 acts could we do for our country? Makes me wonder.

The people are not the only ones with us in this venture. We have support from renowned brands and companies pitching in funds and coverage. Radio FM 89 is the Radio Partner and ARY Muzik is the Media Partner. Superpower Motorcycle brand is generously sponsoring the goodies we give away on our road trip across Karachi.

Lets make this more than just an internet trend. #14ActsForPakistan

We invite you to be a part of this campaign as well!

An A level student based in Karachi who is interested in art and blogging. She tweets as @saramuzzammil twitter.com/SaraMuzzammil

Lawn is (literally) the latest rage

Real life lessons: How to drive away rishtas

Shall I compare thee to an internet creep?