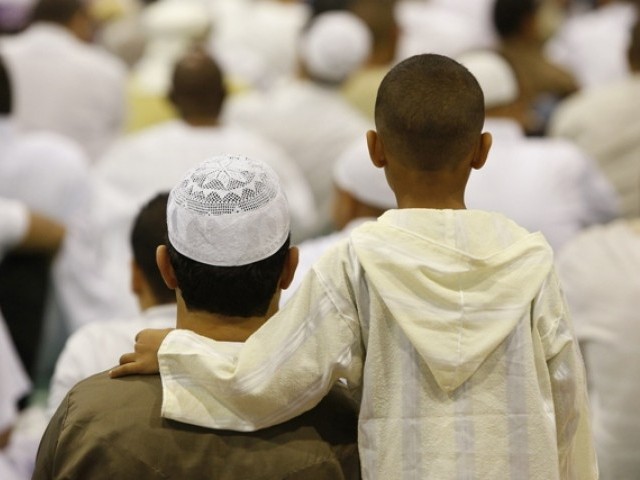 A boy attends prayers for the Muslim Eidul Fitr holiday which marks the end of the fasting month of Ramazan, at the Parc Chanot exhibition centre in Marseille August 8, 2013. PHOTO: REUTERS

“Haw, it must be so boring spending Eid away from home!”

This is something I have heard on more than one occasion throughout my life: elders of the family pitying those who have left home, particularly for ‘non-Muslim’ countries. As a child, it made me imagine a horrible picture of life abroad where Ramazan would be spent in dark lonely corners, having no halwa on Eid Miladun Nabi, and no one to check out your new crisp dress on Eidul Fitr.

The reality, however, is far from that, and I realised this as I grew up.

Working for a news organisation literally opened a window for me to the “outside” world.

Here is a picture compilation of people celebrating this Eid world over: Palestinian women prepare sweets for sale ahead of Eidul Fitr, in the West Bank city of Ramallah August 6, 2013. PHOTO: REUTERS

Iraqis prepare sweets at a bakery for the occasion of Eidul Fitr holiday on August 8, 2013 in Baghdad’s Sadr City neighbourhood. PHOTO: AFP

A child stands in a mosque following Eidul Fitr ceremony, in Pristina on August 8, 2013. PHOTO: AFP A young Chinese Hui Muslim boy watches as people receive blessings from an imam at the historic Niujie Mosque in Beijing on August 8, 2013. PHOTO: AFP

Eid is double the fun when you’re a child Afghan girls look on and sit on an amusement ride as they celebrate Eidul Fitr, in Kabul on August 8, 2013. PHOTO: AFP A young boy holds a balloon as Indonesian Muslims gather to take part in special morning prayers near the Bajrah Sandhi monument in Denpasar on Indonesia’s island of Bali on August 8, 2013. PHOTO: AFP

And here’s my favourite picture: A Muslim man embraces his son at the start of Eidul Fitr at Lakemba mosque in Sydney August 8, 2013. PHOTO: REUTERS

If you’re away from home and enjoying Eid, send us your pictures to [email protected] and show your loved ones you’re not alone.