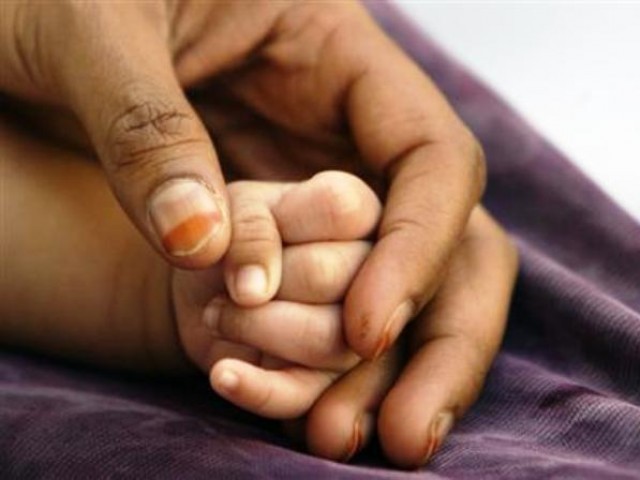 In Pakistan breast milk is an elixir of life that must be promoted. PHOTO: REUTERS

“Sorry, what?” I asked, absolutely shocked.

“Yes, madam, my doctor told me that my breast milk is poisonous and not suitable for the baby, and that is the reason she is sick all the time. I even got my milk tested as per my doctor’s instructions and it was indeed poisonous,” said the mother of a six-month-old, shrunken-eyed Maryam.

The child was diagnosed as a classic case of third degree malnutrition and marasmus.

I was taken by surprise. I had never ever heard of a healthy, physically fit woman like her producing poisonous milk; needless to say, I was extremely curious to see the test reports that stated such obscene information. Upon further probing, the mother revealed that she did not get her breast milk tested by any clinical laboratory but actually performed a ‘very simple and reliable procedure’ prescribed by the village doctor.

The procedure is as simple as pouring the milk in a bowl and then dipping an ant in the milk; if the ant survives, the milk is okay, but if it doesn’t, it is poisonous.

In this woman’s case, the ant didn’t live, and therefore, her milk was deemed toxic.

A medical practitioner asking his patients to perform such a test is ridiculous. This conversation left me speechless and horrified and I wondered how many other women were depriving their children of much-needed nutrition based on such lies.

Recently, a senior health official visited Children Hospital Complex (CHC) where I am currently working as a nutritionist. He delivered a lecture along with interviewing staff members and doctors regarding their awareness and knowledge about the “The World Breastfeeding Week.”

It was after this lecture that most of the hospital staff, including myself, came to know that the beautiful phenomenon of breastfeeding is celebrated all over the world. Though I am a part of the preventive paediatrics department and stabilisation, I am constantly tutored by my medical officer and head of department. Both of them have helped initiate breastfeeding awareness, promotion and re-establishment campaign.

After numerous sessions with different female patients, one thing that never ceases to amaze me is the amount and type of myths, taboos, distorted theories and a yard-long list of do’s and don’ts that surround the most natural and bonding practice between a mother and her child.

The reasons and causes affecting the decrease in breastfeeding are perhaps much more deeply latched on to the minds of the general public than we normally perceive. As a part of the team, trying to re-establish breastfeeding in the babies treated at CHC, I came across numerous stories (like the above mentioned one) where mothers are led to believe that their milk is unable to make their child ‘powerful and healthy’.

Such ideas are often proposed by village elders, elderly women of the family, and in some cases, by community midwives. This sad situation prevails across Pakistan where people like them are successfully promoting their half-baked ideas regarding the benefits of feeding an infant honey mixed with water, certain jari bootiyan (herbs) and diluted cow milk boiled with the very beneficial elaichi (cardamom) and saunf (aniseed).

The lack of knowledge and unawareness about breastfeeding was also apparent in 22-year-old Salma, who had serious concerns about her breasts being too small and her own dislike of drinking milk as being reason enough to not produce good quality milk for her newborn. In reality, breast size and intake of milk in the mother’s diet has no direct relation to the amount and nutritional value of breast milk.

All women regardless of breast size can produce enough milk for their neonates by consuming a balanced diet consisting of additional 500 calories, complex carbohydrates, high biological value proteins and essential vitamins and minerals with adequate fluid intake.

The benefits of breastfeeding go well beyond the hygienic value; it is also convenient. In Pakistan, where even the basic health facilities are a luxury, breastfeeding can offer as a sole protection against diseases like stomach viruses, respiratory illness, asthma, ear infections and certain childhood cancers. The immune factor Immunoglobin A (IgA) found in abundance in breast milk helps the newborn to fight germs and infections. Babies who are exclusively breastfed for at least six months are less likely to develop diabetes, high blood pressure, high cholesterol, obesity and inflammatory bowel disease.

The key to make a baby smart and intelligent with higher stress tolerance is also exclusive to breastfeeding (for at least the first six months). Additionally, studies prove breast milk to be a ‘mind friendly food’ too. In a developing country like ours, breast milk is an elixir of life for infants and must be promoted as a fundamental practice regardless of the socio-economic status.

So in spirit of World Breastfeeding Week 2013, we need to understand and accept the idea of breastfeeding as the basic survival requirement for our babies’ health and future. Let’s make sure the adults of the future are healthy, in their mind and body!

An inspiring nutritionist vowing to change perspectives about food and health. Currently working as a Nutritionist In Children Hospital Complex Multan and founder/consultant at Nutrilife. She tweets @reemaarshad (twitter.com/reemaarshad)