Why don’t beggars quit being so gross? 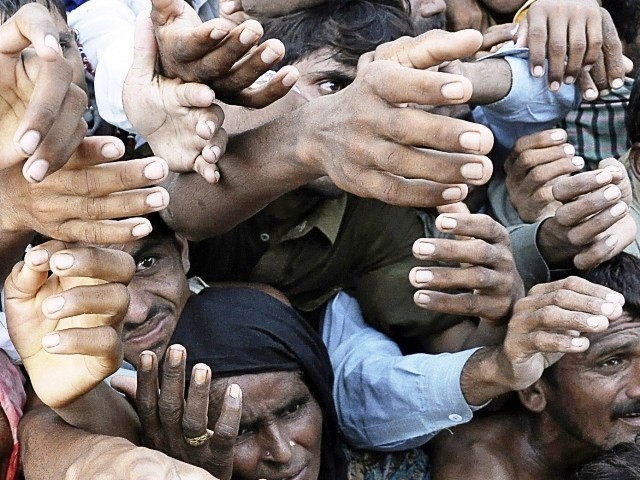 A bunch of lazy people who instead of getting jobs prey on our infinite generosity to get easy money. PHOTO: REUTERS

The following is a graphic description of my traumatic ordeal last week, when I was forced to cruise through a bazaar full of beggars in my handsome new Corolla. I emerged from it with a greater understanding of their sordid ways, of which I shall gladly inform you.

It was an ordinary afternoon that transformed into a grotesque nightmare. I made a fatal mistake of passing through Saddar which was teeming with excited Eid shoppers, and found myself stuck in a gridlock.

That’s when it began. They came at me from every direction; tapping on my window with their yellow, misshapen fingernails; emotionally blackmailing me with their babies and skinny children, saying something about not having ‘rotis.’

I suggested that if they don’t have rotis, they should make their chicken rolls out of pita bread instead. They refused my advice, and continued to pester me.

I soon realised that I had become a victim of the dreaded Fakir Inc that my friends warned me about. It’s a network of lazy people who, instead of getting jobs like us, prey on our infinite generosity to get easy money.

I peeked out of my window at an old beggar dude comfortably sunbathing on the pavement. How revolting! Sure, I understand the glamour of dragging oneself around the streets in sweltering heat and begging for money. I would be doing it too if I wanted, but I don’t because I have dignity….and money that I’ve already inherited from daddy, but mostly it’s because I have dignity!

I rolled down my window and gave the man a crucial piece of advice:

(Uncle! Why don’t you work hard and become a doctor like me?)

The man cried out about the lack of money, opportunities, education yada yada. I sneered at these feeble excuses. I can only pray that this epiphany will soon set on him.

And that went for the rest of the shameless lot too. Don’t these beggars know that there are classy Fast Food restaurants just dying to hire them all, and shower them (and their families) in hard-earned cash?

And even if they refuse these jobs, they can always start at the bottom and work as labourers at construction sites. In no time, a mazdoor would get promoted to a Cement Manager, then Captain Wheelbarrow, then Chief of Scaffolding, then foreman, and before he knows it, he’ll be living in a dope mansion fending off hot, young gold-diggers!

Have some faith in non-welfare, free market capitalism, for crying out loud! Take some lessons from my bro Drake,

“Started from the bottom now we ‘ere…”

Heck, some of these beggars were even abusing children, and amputating people’s limbs so they could get more money from us rich, charitable folk! They should all be thrown in jail, because nothing will deter these guys from crime better than threatening them with free prison meals.

If that somehow fails, we can always torture them in our police stations for further motivation!

Perhaps even more infuriating than these beggars, are those moocher-apologists who say that it is the society’s and the state’s fault for failing these poor citizens! Urgh, could you possibly be further removed from reality?

So here’s the plan: we stop paying the paupers. If we work together, enough of these beggars will get jobs (or starve to death, whatever) thereby sending a message to the Faqir Inc that making amputees and child beggars is no longer a lucrative business.

The begging industry will go bankrupt, and disappear!

Now, I must go and pitch this idea to a bunch of friends who insist on giving away a ton of money, food and clothing to the poor this Eid. Their plan is to let the poor know that we acknowledge their disabilities, disadvantages and desperation; and aren’t exploring ways to feel less guilty about turning our backs on them.

Penned above is a glimpse into how many of those who have been blessed in life view the less fortunate. I hope reading this shows how pretentious and disgusting it sounds.