I am Bradley Manning and you should be too! 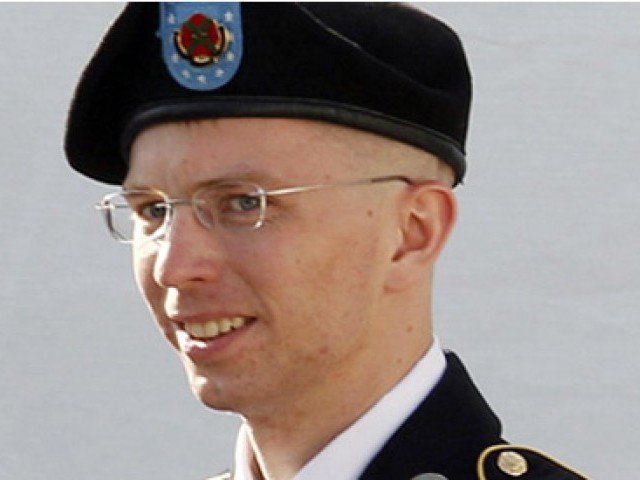 He decided that when he took that oath, it was for his fellow people -- and the people deserved to know that they were being misled and lied to. PHOTO: REUTERS

As the sentencing hearing gets underway for Bradley Manning, who faces 136 years in prison after being convicted of 20 charges including espionage and theft, it’s hard not to feel that a travesty of justice is taking place.

Here is a person who had made a commitment to serve his country and was put in a difficult situation of deciding whether to follow protocol and turn a blind eye to abuses and war crimes being carried out in his country’s name, or to do the morally right thing and bring the atrocities to light.

Bradley Manning chose to follow his conscience, knowing full well the consequences of going against the military machine and political landscape.

He decided that when he took that oath, it wasn’t to serve his superiors in the army, or the politicians in Washington, but his fellow people – and the people deserved to know that they were being misled and lied to. This is why he allegedly leaked classified documents to Wikileaks that lifted the veil of secrecy on US foreign policy for the entire world to see, revealing the true nature of the wars in Iraq and Afghanistan.

For his efforts, he was placed in solitary confinement and meted with treatment bordering on psychological and physical torture. He also now faces spending the rest of his life in prison – a punishment significantly greater than that given to fellow soldiers convicted of murder and rape.

Rather than being appreciative of his sacrifices, he has become a pariah in a large segment of the United States population, being branded a traitor and terrorist sympathiser.

Similarly, Edward Snowden, who had to leave his life in the United States behind in order to bring to people’s attention that their privacy was being violated indiscriminately by their own government, has also been castigated both in the local media and in the larger population as a whole.

In both cases, rather than there being an outrage over this blatant abuse of power and trust by the government, and officials being held to account, it is the messengers that have been shot instead.

It is disconcerting to see how far the government has succeeded in brainwashing the masses to letting slide anything under the guise of national security. The American public that took pride in being the good guys cannot with a straight face claim the moral high ground any more, after revelations of illegal renditions, torture and large number of civilian casualties. In fact, after its treatment of whistle-blowers and prisoners of war, it would be highly impudent and hypocritical of the United States to lecture any country about its human rights record ever again.

This whole scenario is Orwellian in nature, evoking memories of his great cautionary tale, Nineteen Eighty-Four, which should be made mandatory reading for all young adults.

In the book, George Orwell described a dystopian world under omnipresent government surveillance, where the whole population had been controlled through propaganda and brainwashing.

Orwell’s concept of ‘doublethink’ which inspired the term ‘doublespeak’ is employed freely and without any irony by the current US government, describing torture as enhanced interrogation, classifying prisoners of war as enemy combatants, labelling any adult males in the vicinity of a drone strike as insurgents when counting civilian casualties, regardless of guilt, or referring to Snowden as a rogue contractor or spy rather than a whistle blower.

The media also takes a large share of the blame in shaping the public’s perspective. It seems that rather than learning a lesson from the run up to the Iraq war, where media organisations seem to be acting solely as a mouth piece to the United States government instead of actively investigating its claims, the local media in the United States once again seems to be repeating that very misstep.

Most of the local American media has been outright hostile to Snowden and Manning.

From Joe Scarborough claiming Snowden looks like a weasel and asking his face be covered up to David Gregory attacking a fellow journalist, asking Glen Greenwald on live television why he shouldn’t be charged with a crime for “aiding and abetting” Snowden, it seems as if the US media was engaged in their ‘Two Minutes Hate’ against the current Goldstein.

Despite the harsh treatment and all the hate directed towards those who have done so before them, there will always be people who will try to expose evil and bring attention to the truth.

We can only hope that there comes a time when the public is actually ready and willing to hear the reality of the situation. That will only be possible if the people are willing to look beyond the façade of national security and government secrecy, and demand from their elected representatives that the government not encroach on their constitutional rights.

In the immortal words of Benjamin Franklin,

“Those who would give up essential liberty to purchase a little temporary safety deserve neither liberty nor safety.”

This will also be dependent on journalists doing their jobs and focusing on reporting the facts.

History never looks kindly on cowards, deceivers and oppressors – and selling your integrity for whatever price will only bring sorrow and regret. As the melancholic song in Nineteen Eighty-Four goes,

“Under the spreading chestnut tree, I sold you and you sold me.”

Bradley Manning does not deserve to go to jail. He stood up for what he believed was right and sacrificed everything in order to bring the people the truth, and that selfless action transcends all borders, nationalities and religions.

He is a hero for all of us who are fans of the truth, and a victim of an overzealous government trying to discourage future whistle blowers from exposing its wrong doings.

For this very reason, I am Bradley Manning, and you should be too.