The Burka Avenger: Offended by a fictional superhero’s clothes 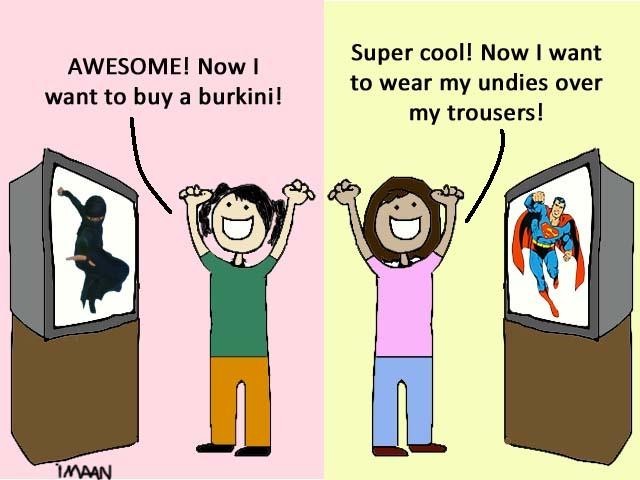 How many of you took your superhero of choice’s dressing sense to heart? ILLUSTRATION: IMAAN SHEIKH

Disclaimer: Like the majority of those with ridiculously strong polarising opinions about Burka Avenger, I have yet to see the darned thing and haven’t the slightest clue what channel it’s on or when it airs; frankly, I grew out of the whole cartoon fad ages ago.

Let me begin by asking how many of you really took their cartoons and comic super heroes seriously? If you attempted to jump off your roof in order to prove that you and Superman came from the same planet, please don’t bother to read any further.

Right, okay, let me rephrase that question: how many of you took your superhero of choice’s dressing sense to heart? I, for one, don’t see many men wearing their chaddis (briefs) over their shalwars and dhotis or their tidy whites over spandex pyjamas or their LV briefs (as much as they’d like to show them off) over their dress pants.

Any of you go around wearing masks and capes or trying to have radiation infested spiders/chicken bite you? No? Then maybe you catch my drift!

How many of you ladies ended up wearing assorted amendments to single piece swimsuits to work? Aside from Veena (who is a comic superhero of sorts in her own right), how many of you bother to hang out in flashy, conical push-up bras?

Right, let’s get some things straight.

From a marketing perspective, we’ve seen what a superb initiative was taken by Huffington Post, talking about Burka Avenger and the impact it will have on society. It’s also managed to instigate a public debate corresponding to multiple layers of gender related issues both within and without Pakistan. Rarely has something captured the imaginations of the burgers and the biryanis, the Pakolas and the Coca Colas with such alacrity. Everyone has an uninformed opinion to offer (what you are reading is no different).

To be fair, the bashing is primarily being done by the liberal fascists with insecurities intensified beyond comprehension. Considering ‘Meena’ and ‘Gogi’ aren’t exactly superheroes or household names (Pakistani comics with female leads), this is the first Pakistani venture featuring a female lead; hurrah for women’s empowerment!

But how dare they make her don a burka? A body-clinging one at that – almost a burkini, as if these same people would oppose body hugging spandex inspired burkas all around them? Heck no!

If anything, the Burka Avenger could herald in a new era of steady liberal infusion – full burka to shuttle cock burka to abaya to spandex burka. Surely a trend liberals could rejoice about, right? But no, until and unless Pakistan becomes a nudist colony, we are doomed to failure and must clearly be a backward state with ‘fundo’ tendencies. To such liberals: I salute your rationale, esteemed sirs, ladies and perverts.

Captain Planet was a hit global cartoon (compared to the fledgling Burka Avenger) with a positive message. Perhaps it indirectly affected in producing environmentalists out of a lot of those that watched it. Did it make people wield rings of power? Did it cause multi-ethnic kids to run around FATA in tiny shorts? Last time I checked, that wasn’t the case.

Blowing things out of proportion is a trait we should leave to the professionals – the local and international media. Instead let’s focus on how ‘The Arrivals’ will use Burka Avenger to prove how the Illuminati are subliminally enslaving us and take a chill pill.

A University of Toronto Graduate in Economics, Political Science and Near and Middle Eastern Civilizations. He tweets @talhaz (twitter.com/talhaz)

Pakistan - In search of the missing patriot

Bhoja Air crash: We are accessories to murder