Charles Bennett: The one and only ‘gora’ cricket umpire in Pakistan! 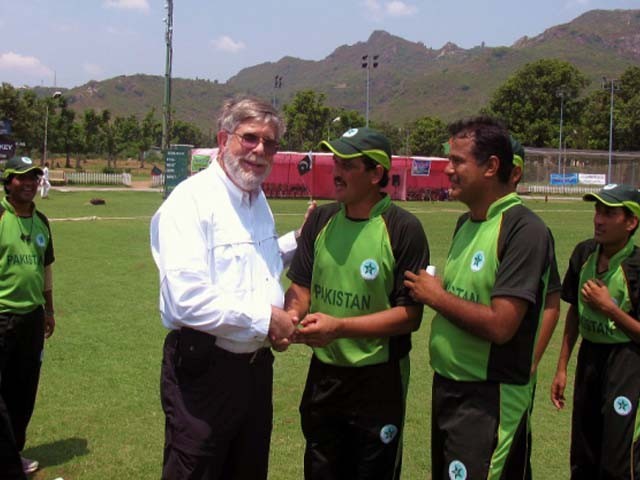 Chuck has not only been encouraging handicapped cricketers but also performing other important community services. PHOTO: LAIQ AHMED

“Howzat!” yells an energetic and enthusiastic young handicapped bowler, looking at an American umpire, at a friendly cricket match played at a local ground in Islamabad this summer.

The American umpire turns down his caught-behind appeal and the bowler turns back to prepare to complete his eighth over of the Twenty20 match.

“It was very close, good call by the umpire,” whispers a fellow batsman in the ear of his colleague in the dressing room.

The friendly match ends and both players find themselves surprisingly seeking cricket tips from the American umpire.

The man I’m talking about is Charles Bennett, known as “Chuck” among his fellow diplomats. He caught my attention because he is probably the only foreign cricket umpire in Pakistan.

As a Pakistani, it has been surprising and equally exciting for me to observe how professionally Chuck performs his cricket umpiring duties. Given the fact that cricket is not a widely known sport in the United States, seeing an American umpiring and coaching cricket in Pakistan not only inspires me and other cricket-loving Pakistanis, but also surprises many foreign diplomats working in the capital of Pakistan.

I believe Chuck’s involvement in cricket and other community services is an excellent example of how non-conventional diplomacy is capable of transcending linguistic and socio-cultural differences to bring people together in a friendly way.

Like most Americans, Chuck knew nothing about cricket when he joined the US embassy six years ago.

“How did you learn cricket and become an umpire and coach?”

This is a question Chuck is commonly asked by people living in Islamabad. His reply shows his overwhelming passion for community engagement that fosters people-to-people ties between the United States and Pakistan.

Chuck, who had a 40-year career in the police in the United States before joining the US Embassy’s Department of Justice, International Criminal Investigative Training Assistance Program (ICITAP) office as the programme manager six years ago, learned cricket umpiring and coaching from an assistant sub-inspector at Islamabad Police Lines.

“I am probably the only ‘gora’ cricket umpire in Pakistan. My mentor was a fellow named Tahir Muhammad – a police inspector who runs a cricket school for kids and also coaches handicapped cricketers. I worked with him. Out of my six years in Pakistan, I worked about four years on the laws and then he let me do the square leg. Now I can do it all,” Chuck recalls.

Spending time with the handicapped cricketers also spurred Chuck’s passion to learn the game in order to effectively engage with the community.

“Tahir Muhammad gave me a thick, 700-page book on cricket. I started studying it. I had to study it and I had to learn it,” he says.

Charles Bennett, who has served as deputy chief and as chief of police in major cities in the United States, says, “In the United States, police chiefs support the Special Olympics, which are for mentally handicapped people. We raised money for that organisation and I was both the regional and state chairman so I learned a lot about how to raise money for handicapped people.”

Given his US exposure and his desire to engage the local community here in Pakistan, he decided to join the Pakistan Cricket Association for Physically Handicapped 18 months ago. Now he is working for the welfare of handicapped cricketers as an active board member. He is determined to seek novel avenues to promote this game among handicapped players.

“We are going to get a website for them and we are going to do fundraising for them through it. We have been contemplating all possible options to support these handicapped cricketers. I tried to induce other people to pay attention to this community service. There are now some other foreign diplomats who are supporting this cause,” says Chuck, adding that it gave him immense pleasure when his efforts to enable young handicapped cricketers from Pakistan participate in an all-Asian handicapped cricket tournament held in India came to fruition with a grant/funding from the US embassy.

He believes the stories of these young cricketers living with disabilities and limited resources to cope with the challenges offer a refreshing perspective on the meaning of life.

“I am really inspired by their triumph of enduring an entirely new way of living,” he says.

Charles Bennett is a source of inspiration for many other diplomats in Islamabad.

“I have been doing community service my entire life and even if you are living on a foreign soil it does not mean that you are not part of a community. I consider myself a part of the Pakistani community and I am here to serve them.”

Explaining his official tasks in Pakistan, Chuck says the one of the important areas in which ICITAP works is to train police in positive community engagement.

“How can police officers engage the community and develop good relationships with people? One of the best ways is through community involvement.  Police officers live in and protect communities. In our training program, we emphasise that police officials must demonstrate what they learn. If we train them to get involved in community service then we are also going to demonstrate it,” he adds.

Chuck has not only been encouraging handicapped cricketers but also performing other important community services.

“We are right now involved in three major things. My deputy and I are Pakistani Rotarians. We joined the Rotary Club at the Marriot Hotel and we are helping to build a community centre in Barri Imam. We are trying to do it as a demonstration to show how you can bridge this gap by being involved.”

“The other thing we are working on is a project called ‘E-village.’ Under this project, we are going to villages where educational opportunities for girls are limited and we are building learning centres equipped with computers and connected to the Internet, with solar panel generators to keep the power going,” he explains.

Chuck Bennett notes that things get done not based on what you have written on paper, but through personal relationships and trust.

“Trust does not come automatically; it takes time and effort. You have to earn it! As the holder of a diplomatic passport on Pakistani soil, I need to be out there … that’s where the real world is. If we want to be true diplomats we need to fully understand that diplomacy is all about meeting with people and developing relationships with people.”

Chuck believes that the developed world can play an extremely significant role in developing Pakistan by sharing insights it has learned after a long struggle.

“People here are very intelligent; they need to be exposed to new ideas.” He says.

Based on his experience in Pakistan, Chuck firmly believes that people in Pakistan need to remain positive about the future.

“These people are most hopeful. I am just honoured to be part of it.”

A journalist, who is currently working with media engagement team of a foreign diplomatic mission in Islamabad; earlier, worked with the State Bank of Pakistan in Karachi.