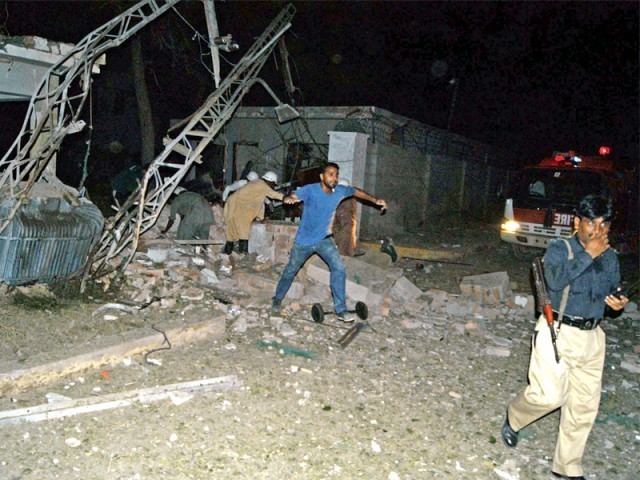 Policemen and rescuers at the site of suicide attack in Sukkur. PHOTO: AFP

At 3:00pm on an overcast day in Sialkot, I buried a friend. He was just 33-years-old and too young to go, but God works in mysterious ways. Major Zeeshan Suddle was killed in a suicide attack carried out by five terrorists on the Sukkur office of the Inter-Services Intelligence (ISI) on July 24, 2013. At least nine people were killed that day and approximately 35 remain injured.

It was Iftar time and my friend Zeeshan was opening his fast with his wife when the first bomb went off. Covered in shattered glass, his wife begged him to stay put, but being the brave person that he was, Zeeshan refused to just sit while others fought for their lives. He asked his wife to remain calm and recite the durood.

Leaving his wife in shock, our hero ran down the staircase to his office where he grabbed his pistol and raced out to meet the attackers head on. Whether he managed to get any of the terrorists or not will be known only after the ballistics reports come in, however, a testament to his bravery is his body, which received seven bullets to the left side of his chest with a final bullet grazing his nose.

Although he was brutally murdered, when we received his body in Sialkot, he seemed to be at peace – as if he was content with his achievements.

The first spell that I spent with Zeeshan Suddle was only for four months in Bahria College Karachi, during which we hardly ever saw eye to eye on anything. It was after being completely out of touch with each other for over eight years that we met again and eventually became friends. The world that we lived in had changed; we had changed and there was room for compatibility this time.

Zeeshan was an idealist; he had everything figured out ever since he was a child. Extremely particular and cognisant of his likes and dislikes, he knew what he wanted out of life. Death was to be either through a long drawn out disease or an action oriented one- something worth dying for. Fortunately, he got the latter.

Having been raised in a family where everybody served the government, it was understood that he too would take up an exciting post at a government institution. He chose the ISI because he believed in making a difference and the way that he carried out his job was a testament to this. Zeeshan’s seriousness towards his job was evident in the number of threats that he would receive. His biggest achievement was to aggravate and hurt the terrorists so much that they would actually be forced to sacrifice two of their own just to attack the compound that he was in, to try to get to him and the team that he was a part of.

He was a fighter.

At his funeral, four of us, his friends from college, were there to bid him farewell amongst many family memebers and friends he had acquired over the years. There were moments of extreme sadness during the wait for his body to arrive from Sukkur to Sialkot. While I felt as sad as anyone else, his memory would just not let me stay that way for too long. I felt proud, happy and content- the way he always wanted me to feel.

This was Suddle, giving back to his country as it had given to him.

Zeeshan lived a full life. He had married a woman whom he loved and respected; at work he was considered a star and he had even performed Hajj just two years ago.

He was killed while he was on duty and in the course of 48 hours, he received several bullets to his chest, was flown in a helicopter, was given a full military escort to his last place of rest and received salutes from all and sundry. Thus, he won the respect and gratitude of his friends, family and the country as a whole.

He was given a gun salute, with his body being draped in the flag of the country that he loved and served. The part of town, where his funeral was held, came to a complete standstill to honour their fallen son. His funeral prayers were offered after the Friday prayers on the 16th roza of Ramazan.

I don’t think even Suddle could have hoped for more.

I hope my friend is happy. He is probably around somewhere chatting up whoever is willing to listen to him. I’m sure he is having the time of his life. I do hope someone has given him a cigarette though.

I can’t stop thinking about you friend, hope you are happy and well. You will be forever missed and loved.

May you always rest in peace. Ameen.

The CEO of Incision Films, an Islamabad based production house which specialises in the production of AV content such as commercials, documentaries, animations and films. Aside from running the company, he also undertakes creative writing as a hobby.