When the Presidential election is more important than the Parachinar blast 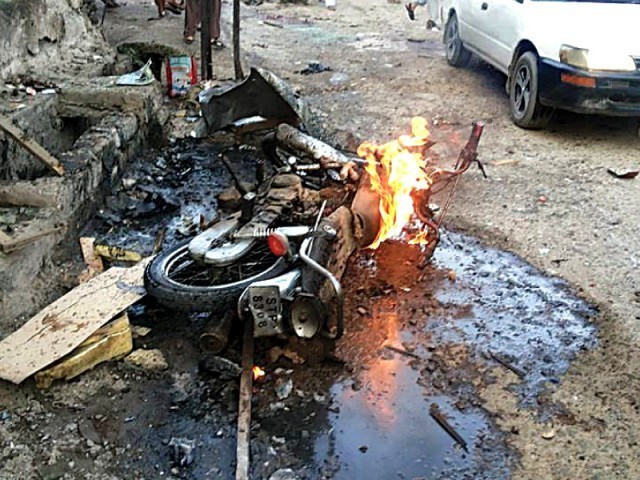 A motorcycle burns at the site of one of the blasts in Parachinar. PHOTO: EXPRESS

Pakistan is a rather strange place.

If you are unable to fast because you are unwell, you can end up with a black eye and maybe a few broken ribs. This is courtesy of our informal, yet thorough and self proclaimed moral police marching down the streets 365 days of the year; they are the ‘righteous’.

However, if you want to join in the Ramazan festivities beware that shopping for iftar in a local market or going to a mosque may become a gamble on life.

The twin blasts in Parachinar yesterday, left at least 50 dead and around a 122 severely injured.  Is it an uncanny coincidence that this was a famously Shia dominated area and that Ansaar ul Mujahiden (a local Sunni militant group) has taken responsibility?

No, it is not. Shias have been targeted time and again, the numbers of casualties more chilling each time whilst the state and mainstream media maintain obstinate silence about the affair.

Remember, back in January when the residents of Alamdar Road were protesting alongside dead bodies of their loved ones in the penetrating cold? It took two days for the media and the government to acknowledge and respond to their demands – two whole days.

And, this time was no different.

Last night the electronic media obsessed over the Presidential election whilst the families of the Parachinar victims were tortured by crippling grief and hopelessness.

Clearly, the media has better issues to address than the grief of these stricken souls.

But the truth is, we don’t care who the next president is; what we care about is how the state is going to protect our people.

What I find amusing is that such tragedies usually result in spats – government officials and the opposition, mainstream political parties and highbrow personalities, from those who were responsible to prevent the disaster to those who will now use it to undermine their opponents. Although, each one of them are able to find someone to blame, they are unable resolve the issue and come up with a solution.

The same happens when Hazaras are butchered; when a roadside bomb explodes in Peshawar, or when innocent people are massacred anywhere in Pakistan.

These statements are awfully trite; they bear the same run down sentences, hurriedly altered to suit the new situation – the place, date and number of dead.

“PM Nawaz Sharif has strongly condemned the blast in Lahore and reiterated his determination to overcome the menace of terrorism!”

“President Asif Ali Zardari has strongly condemned the blasts in Quetta targeting a bus of the Sardar Bahadar Khan Women’s University and the Bolan Medical Complex”.

Yes, this is precisely what we owe the victims.

The proclamations are brandished over the electronic media, printed in newspapers and spread on social media; with that, the job is done. We can all go home now and carry on with our lives.

However beyond the numbers and standard statements announcing the dead, there is an identity of a person that they forget to mention; the nameless faces who bear the brunt of our law and order situation are not merely numbers. They are human beings with families. Beyond the blame games and ‘security lapses’ there is the macabre silence clinging on to the houses of these victims that they are unable to remove. There are families that are torn and hearts that are broken. But there will be no justice.

Smug in the comfort of our homes we fail to see the story behind these numbers, the incredible human tragedy behind the label of an ‘unfortunate incident.’ But, these news stories are real.

I have grown up seeing our eagerness to condemn these killings and our tardiness to actually do something about them. It makes me feel like a hypocrite. We stage mass protests when Rohingya Muslims are persecuted in Burma but do nothing to ensure that the state assists the families of sectarian violence victims here, at home. We are hopping mad when Kashmiris are killed by the Indian army but do little when our Rangers shoot an innocent man point blank. We are the flag bearers of Palestinian independence but treat our own minorities like animals. This is great- isn’t it?

Grandiose condemnations don’t bring back the dead nor do they guarantee the right to life, property and liberty for masses. They just prove that no one cares past image building stunts.

You just have to have a tea spoon full of humanity.

The path that lies between condemnation and action determines who we are as people and as citizens. It is this distance that can save the lives of many others; the action that would alleviate the misery of victims’ families.

The action that would ensure justice is done.

A Youth Activist and a student of Politics at LUMS. She tweets @twitter.com/ZaraShahid_

When eating in Ramazan means asking for a beating