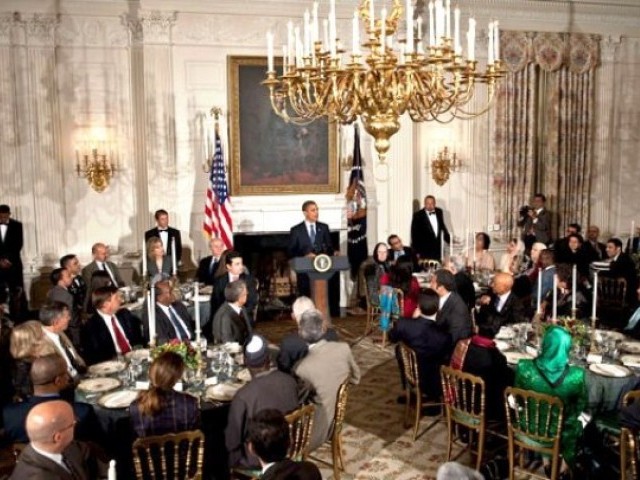 US President Barack Obama speaks at an Iftar meal, the breaking of the Ramadan fast, at the White House in Washington. PHOTO: AFP

This is the story of two Washington Iftar dinners.

First, the Israeli Ambassador, Michael Oren, invited Muslim leaders to a diplomatic Iftar dinner last week and Imam Antepli of Duke University wondered aloud if the event was meaningful. Then the Obama administration invited Muslim leaders to the White House Iftar dinner and Omid Saifi, the Islamic studies professor from the University of North Carolina Chapel Hill, called to boycott it.

It’s obvious that we, the American Muslims, are struggling to identify the right posture: Boycott, and you sever a diplomatic tie; attend, and you are seen as the “enemy’s” ally.

While I empathise with the demands laid out by Professor Saifi – the Obama administration should abandon overseas drone attacks, halt nationwide racial and religious profiling, and release select Guantanamo Bay prisoners – I knew the boycott will fail to achieve anything beyond creating a social media ripple – because that’s the history of our boycotts.

Just wondering if the "honoured" guests at #Obama 's #WhiteHouseIftar will be force fed #Guantanamo style? #Ramadan via @CagePrisoners

Internal Muslim discord is part of the reason these boycotts fizzle out. We all know the sectarian rifts that lurk beneath the diplomatic smiles. No surprise, both Muslim Congressmen and over four dozen diplomats attended the event on July 25th.

But our misplaced reliance is the larger reason; we are barking up the wrong tree. Want to change anti-Muslim discrimination? Then also go to the “right” house, not just the White House. The ‘right’ house of God who warned us in the Holy Quran, that Allah (SWT) does not change the condition of people until they change the condition of their hearts.

Just like Professor Saifi, the Quran also made a “call to conscience”. But who wants to hear about that? Boycotts are glitzy; introspection is dull; it makes us get out of our comfort zone and ask hard questions.

Yes, drone attacks are immoral and should be stopped but where is the call for the boycott of the Saudi sponsored madrassahs fuelling terror attacks that have claimed over tenfold Muslim lives as compared to the drones?

Yes, we should stand up against the forced-feeding of some Guantanamo Bay prisoners but let’s also stand up for the well documented and sustained extrajudicial killings of prisoners in Pakistan.

Yes, the pockets of racial and religious profiling by the US authorities should be protested but who is going to wail against the institutionalised racial and religious oppression (and in some cases, killings) of the Shias in Pakistan, Ahmadis in Indonesia, Bahai’s in Iran and Copts in Egypt?

Demanding the same rights in the US, which we so blatantly trample upon in the Muslim countries takes away the strength of our moral arguments. It equates us with the very mindset we resent. It enables the White House to fill up the sought after Iftar dinner to its brink despite our calls for a boycott.

Sincere question: what good comes of having dinner with people DIRECTLY responsible for murder and torture? #WhiteHouseIftar

For us Muslims, Ramazan is a time for reflection and prayer. Let’s reflect upon the teachings of the Holy Prophet (pbuh), introspect and be charitable to those who are discriminated against in our own backyards – both Muslims and non-Muslims and spend the remaining fasts in heart melting prayers.

Even if the White House ignores our demands, the ‘right’ house might accept them.