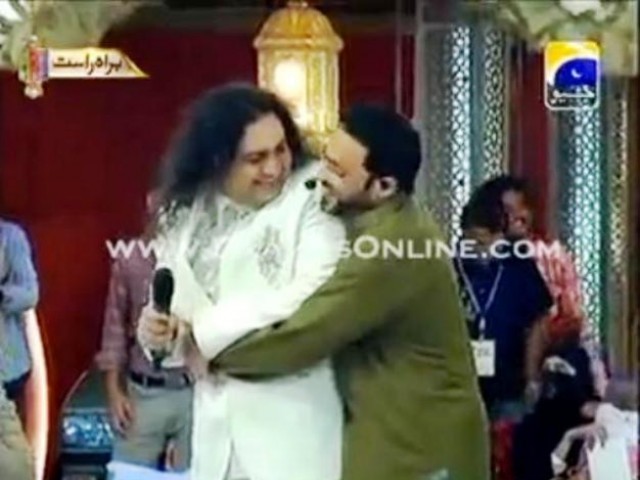 Soon after Shah joins Liaquat on stage, the TV show host ridicules his music and then gets personal commenting on his hair, making him turn around as if he was a circus creature. PHOTO: SCREENSHOT

Last night, a seven minute video clip went viral on social media. Many of you probably saw the video in question; it was the latest transmission of the Ramazan show Amaan Ramzan: Iftar Aamir Ke Saath.

For those of you who missed it, the video is a clip from a pre-Iftar show with Aamir Liaquat in which he invites Taher Shah – Pakistan’s latest sensation for good or bad reasons – as a guest.

This was not Mr Shah’s first public appearance since his video reached global fame. Earlier in June, Taher Shah gave an interview on the 4 Man Show. Despite featuring parodies of entertainment and political personalities, the show remains sensitive when interviewing real-life celebrities. 4 Man Show’s interview with Shah, while funny, did not cross the limits of respect.

Let’s not get into the debate on what Mr Shah’s music is like; the bottom line is – he’s popular. His fame, however, should not make him vulnerable to public humiliation; after all, pursuing one’s passion is not a punishable act. Unfortunately, Aamir Liaquat seems to think otherwise. The way he treated Shah on his show left me disgusted.

A man like Liaquat, whose own controversial video is still fresh in our memories from last year, has the guts to first invite a celebrity and then make fun of him based on rather personal attributes?

Here is my analysis of Liaquat’s behaviour over the seven minutes;

Soon after Shah joins Liaquat on stage, the TV show host ridicules his music and then gets personal commenting on his hair and even tugging it, making him turn around as if he was a circus creature. After asking a tasteless question of whether Taher Shah’s hair is real or fake, Liaquat proceeds to shock the audience by saying:

(Someday, a djin will fall in love with this hair.)

After requesting Shah to sing a few lines from his song “Eye to Eye”, Liaquat interrupts him, brings in a live snake and forces the singer to wrap it around his neck. At this point it was clear, with the harassed look on Shah’s face, that he was uncomfortable with the snake being around him, but the host, who had seemingly lost his mind, continued to badger him.

The singer’s voice turned shaky as he struggled to resume singing once the snake was set on the ground. In an overtly malicious voice, Liaquat continues to say, “gayen” (sing) repeating it at least 10 times in 13 seconds. When Shah’s discomfort with the snake being around is sensed, Liaquat says “mien saath hoon,gayen” (I’m right here, you sing); he says this while invading his guests’ personal space by wrapping his arms around his waist.

Upon Shah singing the song again, Liaquat suddenly offers his very own version of slapstick in a desperate attempt to look funny; making ‘comical’ facial expressions, looking into Shah’s eyes, the host then reaches out for a girl sitting next to him. You can clearly see how forcefully he grabs her head to make her pay attention to Shah. As if the host alone was not enough, a cameraman soon joins the stage pushing; the cameraman comes straight into the distressed singer’s face to make him more self-conscious than he already was as Liaquat toys with Shah’s hair. All this time, the camera keeps going back and forth from the stage to the audience members, who seem to enjoy the circus act being put up for them. I’m not a Taher Shah fan, unlike many of my friends who find him highly entertaining. However, watching his interviews, and particularly this one, has changed my opinion of him. His song may not be great, but his personality certainly is and the patience and humility he continues to show throughout those seven minutes of public humiliation is no ordinary task.

It was not just about what happened in this episode, but also about the ostensible philosophy of the show that revolves around the promotion of charity and Islamic values. Before every Sehri and Iftar, we see Liaquat giving lectures on morality and ethics Islam has taught, so my question to Liaquat would be,

“Are these preached values limited to seeking donations (read increasing the show’s ratings)?”

Charity is not the only virtue Islam has taught, respect for others has been give even great credence and respect is something that needs to be realised by Mr Liaquat and the audience members cheering the host’s reprehensible behaviour.

This should also serve as a reminder to those of us who have shared the video on social media forums for the sad purposes of humour.

Lastly, my note to Mr Liaquat is,

The values taught in Islam are more than just promoting charity, it also teaches us to respect our fellow human beings.

A fellow human being