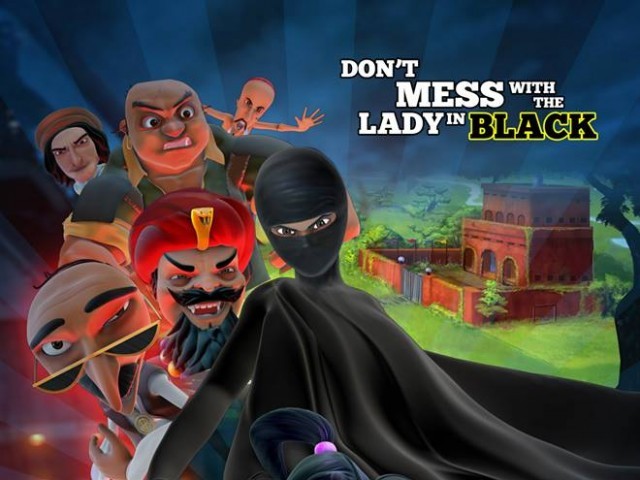 She looks like a ninja and fights crime wearing a costume that hides her identity and helps her blend into the crowd simultaneously. PHOTO: PUBLICITY

Imagine a young Pakistani girl. She lives a normal life; maybe she is just a reporter like Superman. She dresses pretty much like every other Pakistani girl. There’s nothing unique about her. Except.. wait! She is a superhero!

She takes on evil villains by using her superpowers, while wearing a disguise. Because, duh, every superhero has to wear a disguise. They must protect their identity.

Here’s a picture of the super-girl chilling at Karachi beach:

Well, there’s nothing specifically wrong with these superheroes except for the fact that they are not really ‘Pakistani’ looking – their attire is out of place. We don’t do many swimsuits or knee length skirts here do we? No matter how hard I try, I just cannot imagine a Pakistani superwoman fighting the Taliban in say, Sohrab Goth, wearing these clothes (*shudders at the thought*).

Recently, though, I came across this incredible video for a brand new female superhero for the twenty first century distressed Pakistani. Meet Burka Avenger. Yes, that’s the name she goes by.

The first thing that came to my mind was:

“Oh my God, this is excellent animation! Finally our artists are starting to get mainstream. Oh, the quality!”

I was in raptures. The hunger of arts inside me received new sustenance. I immediately shared the trailer on my personal social media accounts, and clocked in a reminder of when the show would air.

But what happened next broke my heart.

I came across innumerable, disdainful tweets criticising the disguise of this local superhero:

@MariumCh true – the women need a role model – IMO a girl in a shalwar would have sufficed. Women fighting in Burkas? Eh…. @omar_quraishi

What I interpreted from the tweets was:

“Burka! Burka! Bad burka! No burka! Why burka? This burka and that burka.”

No, the highlight of this great breakthrough is the fact that the main character wears a burka!

Being an ardent appreciator of art, this was so depressing for me. Rarely on this side of the world do we come up with something local, something creative, something original, and when we do, all we can think of doing is criticising this success.

What’s so wrong with a burka anyway?

And if it’s okay to call a veiled girl “ninja” after superhero cartoons – why is it wrong to name a veil clad superhero Burka Avenger?

This superhero is inventing her own type of martial arts. She looks like a ninja and fights crime wearing a dress that helps her hide her identity and blend into the crowd simultaneously. The character itself, the ‘ordinary’ girl behind Burka Avenger, is not hijabi. Her superhero costume is just that – a “costume”.

I’m a feminist myself and I believe in giving all due rights to women. But I ask again, what has a burka got to do with freedom? How can this piece of attire restrict freedom?

Personally, I feel more free with more clothes on; I would feel suppressed if I’m forced into shedding a piece of cloth I’m comfortable in.

My colleague who sits next to me wears a burka. No one else in her family does, and according to her, her choice has nothing to do with religious reasons. She wears the burka because she’s ‘too lazy to dress up every morning’. On other occasions, she chooses not to wear the burka and dresses differently.

My mom wears a burka occasionally; no one forces her to. When she’s cooking in the kitchen, still in her night-suit, and needs something quickly from the nearby market, she’ll pull on her burka and be back with her stuff within 10 minutes. What’s wrong with her being comfortable with this practice? I highly doubt she feels oppressed or restricted by this habit!

I’m all for freedom and I believe that the burka is not the opposite of freedom.

Yes, I agree we live in a patriarchal society where women get negligible rights; yes, I have seen this phenomenon with my own eyes; I have gone through it myself, but creating a hype about non-issues like a burka clad animated character when we have real issues badgering us every second is not going to help!

Condemning Burka Avenger will not make you ‘cool and liberal’. I think this innovative cartoon series is an excellent effort. It’s unique, it’s Pakistani and children will be able to relate to it. And please, I highly doubt that any girl will feel compelled to wear a burka after watching a cartoon who does. Stop criticising just for the heck of it.

She’s fighting all the bad men – the “Vadero Pajeros”. Be happy with that!