DHA: The hub of ‘open-air’ prostitution in Karachi 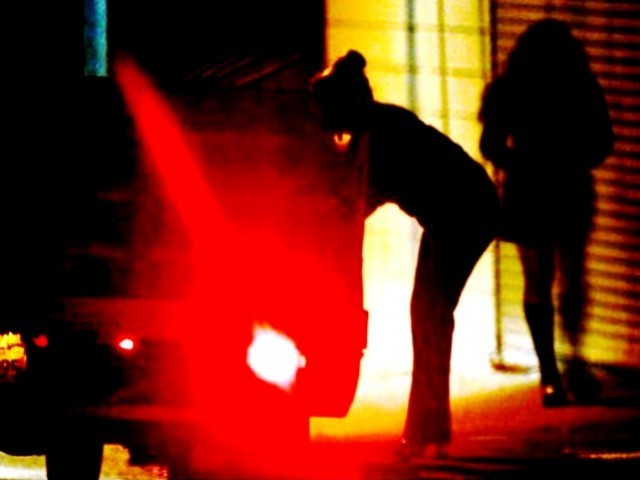 The police turn their backs towards these activities. Either they are ignorant enough not to recognize the prostitution ring, or they are party to this business. PHOTO: AFP

Since a few years, Khayaban-e-Shujaat in DHA, Phase 5, Karachi has gained a notorious reputation of being the hub of prostitution. The section of the Khayaban specific to this booming business extends between A-street and Khayaban-e-Tanzeem. Another operating area is at the intersection for the main Zamzama Boulevard.

The female sex workers, their pimps, a multitude of auto rickshaws and an ever increasing clientele are a daily affair on this road. From dawn to dusk, the business is in full swing. The clients are mostly domestic help, chauffeurs, cooks, guards, gardeners and especially relatives of VVIP security personnel who visit Karachi from rural areas. Most of them are employed by the residents of DHA.

Vehicles can often be seen parked in deserted nooks and corners along roads going to and fro from this area, serving as a quick replacement for room and bed. In this regard, many complaints have been made to authorities while some objections have been received by security guards or owners of the property where such activities are carried out. Unoccupied bungalows in the street also provide shelter for these activities.

The police turn their backs towards these shenanigans, either because they are ignorant enough not to recognise the prostitution ring, or they are party to this business. My guess is the latter. In any case, they are a waste of resources, as they have failed to respond to the complaints registered by residents. This is also true for the DHA vigilance team, who clear out areas only for these spots to be re-occupied by female sexual workers once the patrolling vehicles move on.

Attempts to curb this thronging business have failed miserably..

While prostitution is common in many commercial areas of DHA, this is a unique ‘open air’ market, where customers can window-shop, stop, stare and haggle over rates before riding on with their escorts.

From a healthcare perspective, there is under-reporting of sexually transmitted diseases in Pakistani female sexual workers, because the topic in itself is a no-go area.

However, according to a study done in 2009, titled ‘Care seeking for Sexually Transmitted Infections (STI) symptoms in Pakistan’, over half of the female sexual workers, male sexual workers, transsexuals, intravenous drug abusers and truck drivers who had experienced symptoms of sexually transmitted diseases received treatment for their symptoms. The study also states that approximately one third of them did not report their symptoms to a healthcare unit. Most care is received from private clinics rather than public ones. Genital-related symptoms were the most commonly reported.

Female sexual workers could be the source of STIs like syphilis, chlamydia, gonorrhoea, Herpes Simplex Virus 2 (HSV-2) and Hemophilus Ducreyi. A local study ‘Sexually Transmitted Infections in Pakistan‘ at an STI clinic in Faisalabad concluded the highest number of cases reporting treatment for Syphilis.

Also transmitted sexually are diseases like Hepatitis B and HIV;  unprotected sexual intercourse leads to the spread of these diseases.

As mentioned earlier, prostitution is the oldest profession; no matter how hard we try to curb it, it will pop up someway or the other. Thus, ideally speaking, female sexual workers should be offered health checkups, HIV testing and serology and regularly encouraged to undergo pap smears for Human Papilloma Virus (HPV Serotypes 16 & 18), related to cervical cancer.

Moreover, awareness campaigns for female sexual workers on transmission of STIs should be carried out by organisations. Provisions of condoms and other contraceptive methods should be discussed with them so that they protect themselves as well as their partners.

The health department’s intervention is required to register female sexual workers who are HIV positive and offer them treatment through proper channels. The residents of DHA should also play a part by keeping a check on the activity of their domestic help and chauffeurs, who may be carrying STIs, at risk of infecting their spouses once they visit their hometowns. Also, food handlers, baby sitters and maids should be given adequate information on hygiene and the risks of STIs.

Although prostitution has its accompanying stigma, if it is ignored further it can have devastating consequences on our health and social well-being.

A young doctor, First Responder and Co-founder of First Response Initiative of Pakistan, FRIP. Training the general public to become first responders. Aspires to be a Cardiac Transplant Surgeon and build Pakistan's first Organ Sharing Network. Believes in writing for change. He tweets as @Jahanzebeffendi (twitter.com/Jahanzebeffendi)

Save our doctors at Civil Hospital Karachi!

Burned alive: Who is to blame?

Kidnapping culture: They show no remorse