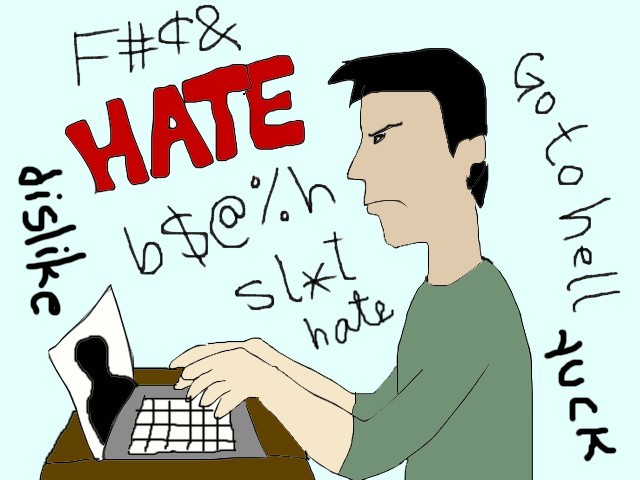 I know that it is ‘only the internet’ and I need to have thicker skin; but some comments make me wonder what my people have become. DESIGN: IMAAN SHEIKH

The true face of people shows on the internet. Online anonymity has something thrilling about it which makes you say whatever you really want to. Unfortunately, some people (even while not being anonymous) say the cruelest, more hateful things on social media.

I tend to always feel a little depressed after going through the comments sections of public posts on Facebook. I know that it is ‘only the internet’ and I need to have thicker skin; still, some things leave me wondering what the people of my country have become.

A few days ago, I stumbled upon a video on Facebook. Around seven girls, dressed in tank tops – and some wearing shorts – sang the national anthem.

It appeared that they were Pakistanis living abroad. From the comments section and a little bit of research, I found out that they were contestants of Miss Pakistan, a pageant held in Canada. This video was a few years old.

This did not leave a bitter taste in my mouth; it was the comments section that did, yet again.

Here are some of the comments:

“Lakh laanat in pe”
(Curse these girls a million times)

“They need a secular system, these girls of bayghairat gharaanay (shameless families).”

Most of the comments even declared these girls Indians (I really don’t know by what logic), even going as far as saying that the video was a conspiracy to spoil the image of Pakistan. Ah, the things we deny. But did the girls really deserve to be called prostitutes for what they did?

I can’t say I did not expect anything contrary to what I saw in the swearword-riddled comments. I work in the web section of a newspaper and it requires clearing comments on articles too. Sometimes, we get comments disturbing enough to completely destroy the day.

I am sure most people here have seen a Facebook post or two about Malala Yousufzai. The comments there are always eye-opening. There have been posts comparing her to Arfa Karim, Dr Aafia Siddiqui and even Shahid Afridi (what on earth…?).

Today I saw a picture comparing her to Abdul Sattar Edhi.

The story below the picture was the same.

They went on to call a 16-year-old girl an “enemy of Pakistan and Islam”.

I found this comment under a Malala-Arfa comparison photo:

There’s even a page called “I hate Malala. CIA AGENT wife of Obama”.

Disagree all you want with her; go on to believe she is an American agent; why must you, however, call her cruel names? She is, in the end, only a 16-year-old, that too, from our own country! So are the girls in the national anthem video. Their identity is Pakistan.

What truly makes me sad is how people who claim to be so ‘ghairatmand’ shame others and call them bay-ghairat (without dignity). They go as far as calling them names and cursing their families. They negate all of their own upbringing when they do this. It is the worst kind of online bullying. A famous person is a person in the end, and you can poke mild fun at them or disagree with what they’re doing instead of making yourself look like a fool.