My visit to Bibi Zainab’s (AS) shrine: Memories cannot be destroyed 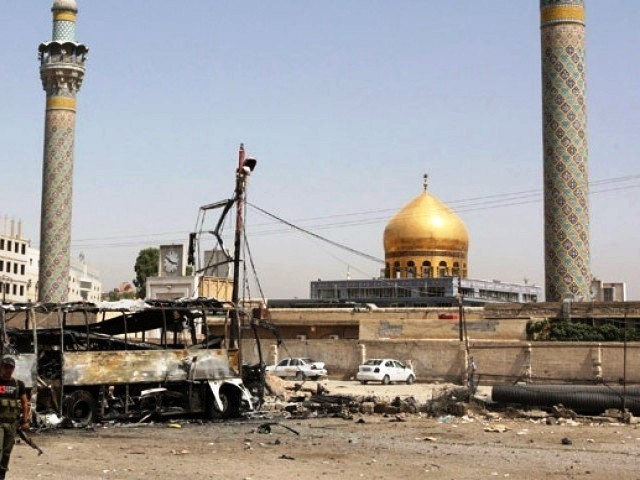 The shrine consisted of a beautiful dome, a mosque, surrounded by a big courtyard and a main hall where the mausoleum was located. PHOTO: AFP

I was 23, in my last year of an undergraduate degree and perhaps like every young soul, had many questions about everything under the sky; religion, nationalism, God and just life in general. Although I have always flaunted my beliefs with utmost certainty, there have been many times in which my mind is left wondering, about uncertainties, in an abyss of utter confusion.

That was back in 2008, when I had first visited Syria and fell in love with the country. I loved everything about it; the people, the cultural diversity and above all the sacred shrines that invoked the deepest spiritual awareness of God inside one’s soul. Of course, my view of Syria was limited to the areas I had lived in and visited; those mainly being Damascus and the small city near the outskirts of Damascus where the shrine of Bibi Zainab (AS) is located.

The dome of Bibi Zainab’s (AS) shrine.

The city where Bibi Zainab’s (AS) shrine is located was named after her and was also my main destination. The shrine consisted of a beautiful dome, a mosque, surrounded by a big courtyard and a main hall where the mausoleum was located.

The surrounding area was peppered with shops within a humble little marketplace, some of which were operated by students from Pakistan as well. Syrian shopkeepers would greet pilgrims warmly and many seemed to know quite a bit about Pakistan as well. Funnily enough, each of them were familiar with the Pakistani political sphere and had their own personal favourite Pakistani politician too!

The ruins of the Yazid palace and the gates of the Umayyad Mosque.

I had become accustomed to listening to tales of Bibi Zainab’s (AS) bravery in the times of Karbala. She was a symbol of empowerment for women and an image of resistance to the oppression as well. When I first entered the main hall of the mausoleum, I was so overwhelmed by the thought of being there that I was unable to catch my breath in time to look at the shrine before having an emotional breakdown beside it. In that moment, in the midst of tears, what I felt was the strongest presence of God – a feeling that I had never experienced as powerfully before, one that remains with me even today.

Mausoleum of Bibi Saikna (AS).

In old Damascus, I visited the historic route leading from old souk, or market, to the Umayyad Mosque, close to which the court of Yazid was originally located. Half a kilometre away was the shrine of Ruqayya Bint al Hussain (AS), commonly known as Bibi Sakina (AS), the four-year-old daughter of Hazrat Imam Hussain, who had died in imprisonment and buried therein.

I also happened to go to Aleppo, a city encumbered in war now, to visit a mosque with the sacred stone upon which, it is believed that, the head of Hazrat Imam Hussain (AS) was presented to court. From what I remember, the area was beautiful- it is still unbelievable that the magnificent city I visited a mere three years ago is now war torn.

Grave of Prophet Yahya (AS), also known as John the Baptist inside Umayyad Mosque.

If anyone had told me back then that in three years time a violent struggle against the regime would start and sacred places would be attacked, I would have laughed at their utter naiveté and told them that it was impossible. But it happened nonetheless and not only was Bibi Zainab’s (AS) shrine attacked, the shrine of one of Hujr Bin Adi(RA), a close companion of the Holy Prophet (pbuh) was also attacked by rebels. They took complete control of Hujr Bin Adi’s (RA) shrine, destroyed the mausoleum including the grave within and allegedly exhumed the body. Thankfully, this disturbing event has not taken place with Bibi Zainab’s (AS) shrine and hopefully never will.

On the face of it, it appears that a democratic struggle has been hijacked by splintered groups, many of whom have their own agendas; the most dangerous of them being to rid Islam of all of its diversity and sources of inspiration. Unfortunately, what these people do not understand is that their efforts at dividing and distorting Islam is ever futile. Our source of inspiration lies not only in the places they have so easily destroyed but it is connected on a spiritual level amongst souls.

Bibi Zainab (AS) will always remain an inspiration to everyone fighting against tyranny and oppression. As for the place at which she was buried, it will always remain in the hearts of those who cherish it and remember it. If only those who attacked it had a heart of their own, they would understand the transcendental value of what they destroyed.

A software engineer by profession working in Lahore, Zain likes to write about religion and social satire in general. He blogs at rorolia.wordpress.com/ and tweets as @XainGardezi (twitter.com/XainGardezi)

There was a time when I could walk through Quetta