Taxi driver shot dead by Rangers: Trained to kill or trained to protect? 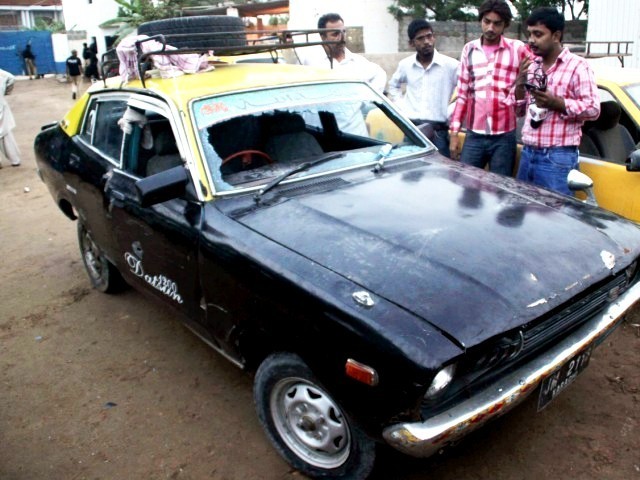 Yesterday, Murad, a taxi driver, was shot dead in front of his four-year-old son by Ghulam Rasul, a Rangers soldier. Witness accounts suggest Murad was asked to stop his vehicle and as he reversed towards the Rangers, he was greeted with four bullets in the chest.

Ghulam Rasul has been apprehended and four other Rangers have been suspended due to their involvement in the incident as of the publication of this post.

Before we delve into debates about the army, morality, or the legality of this incident, let us take a moment to acknowledge the many human lives that will be affected by this one incident alone. It’s not about losing Murad but also about the many others impacted directly. Murad’s four-year-old son who witnessed this trauma; Murad’s other dependents; Ghulam Rasul and his family who will be reminded of his actions for the rest of their lives. We cannot value a human life as an economic utility function – if the HRCP reported 1,726 official deaths in Karachi within the first six months of this year, it does not make additional deaths any less significant.

It is an indisputable fact that the Rangers duty is to protect its citizens, yet clearly this was not the case here. Similarly, Ghulam Haider’s unfortunate death at the hands of another Rangers soldier roughly a month and a half ago still runs fresh in the minds of the public. It is important to note that while these incidents cannot be classified as a trend on their own, they can be used to debunk the myth of ‘shoot on sight’ that seems to persist regarding the Rangers authority. If ‘shoot in case of refusal to stop’ was an order, we would have seen more of these incidents.

Are we to believe only two drivers in the past 45 days refused to stop when asked to by authorities?

Another argument that contradicts this popular theory would be the locations and the professions of those killed- can we imagine a similar incident happening in the more ‘prestigious’ parts of city to seemingly ‘white-collared’ persons? If not, this incident can also be termed discriminatory in nature.

It is retrospect which allows us to analyse these incidents and the facts and strongly form an opinion one way or the other. However, Ghulam Rasul did not have that luxury. He had moments, after a vehicle he flagged to stop, reversed towards him- this is not a justification of his actions but a presentation of facts. In the uncountable times that Ghulam Rasul will go over this incident in his head, he will no doubt explore the many other alternative courses of actions he could have pursued.

We can propose he should have opted for the tyres and we can discuss why he shot blindly with a child present in the vehicle. Regardless, it is not unfair of us to expect a cooler head- Ghulam Rasul is a Rangers personnel. He was not picked from the streets and handed a gun; he went through intense physical and mental training to earn the uniform and his behaviour is rightly disappointing.

Yet, Rangers are no strangers to being attacked themselves- perhaps Ghulam Rasul acted instinctively and in self-defence. Did he need a defence when he was armed and surrounded by other Rangers? It’s subjective. We have seen solitary suicide bombers attack Rangers before through the medium of vehicles (North Nazimabad attack on Rangers) and if we argue that Ghulam Rasul should have waited, we are lending credence to lack of action we bemoan when suicide bombers are able to carry out their activities.

Such incidents can also easily be caused by a rogue mind. In that case, rather than simply inspecting the action, we need to analyse the aftermath of such actions rigorously – who was Ghulam Rasul taken in custody by? Was it his colleagues? Was it the police? Will he be shielded by his institution or hung out to dry? Will the state provide for Murad’s young son to go through an ample recovery process? Will the Rangers do the same? Will we vilify the incident as Rangers being abusive or will we try it fairly? Are the Rangers being abusive indeed? Are there internal checks to prevent potential abuses of power? Do we even train our Rangers for special civilian protection tailored specifically for cities like Karachi and Quetta?

Just like we chastise a few bad seeds for giving Pakistan a bad name globally, we cannot be hypocritical and blame the entire institution of Rangers for the actions of a few elements. It is easy to forget the many violent outcomes averted because of the proactive actions of the Rangers because they never make the popular media. Rangers do their job discreetly- had Murad indeed been a terrorist then this incident would have been glossed over and forgotten soon. We should not treat this as a case against the Rangers- Ghulam Rasul should be tried on the basis of the incident alone. Most importantly, however, his role as a Ranger cannot be undermined but extra care should be taken that it does not protect him either.

A finance graduate who worked in the fashion industry and then went back to working in finance, he tweets as @nabeeljafri (twitter.com/nabeeljafri)

Don't blame Imran Khan for your own mistakes!

DI Khan prison break: Is the PTI to blame?

Remember Zakoota Jin and Roohi Bano? They need us now.

Musharraf trial: Is this really the most pertinent problem for Pakistan?