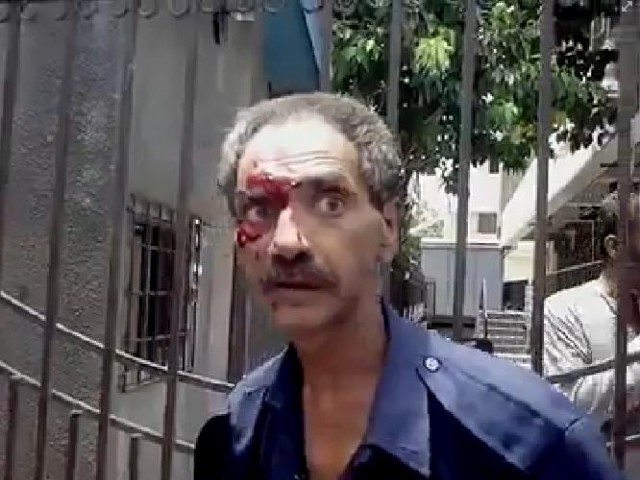 This man was eating in a private area during fasting timings. This resulted in him being beaten bloody by the fasting men around him. PHOTO: SCREENSHOT

It has to be said, nay proclaimed, that we are the proud custodians of Islam and chest thumping leaders of the Ummah. But was there any doubt on that score?

Notwithstanding the deafening silence in the land of Al Harmain Al Sharifain, Saudi Arabia, we protested against an American film by a sloppy filmmaker. We so loved setting ablaze our own property and cinemas, because of the resounding impact it had on the life and profession of that sloppy American filmmaker. We keep screaming like banshees at the plight of poor dispossessed Palestinians who have never backed us on any issue, including our jugular vein and sovereignty barometer, Kashmir.

We spurn Israel’s outstretched hand because we have a bone to grind with them; our friend’s enemy is our enemy. So let’s scream blue murder at Israel for the sake of the Palestinian issue, even if the latter says “Pakistan who?”

Since we wear our religion on our sleeve and think it’s our right to pull up others for transgressions, we have the right to impose religiosity on anyone. Needless to say, Allah (SWT) will reward those pious fasting men who beat up that old, toothless security guard who was eating during Ramazan (gasp!) in a “private corner”. Private? What’s that, momins?

We mind our business and everyone else’s too. How dare that elderly man tempt us by that scrumptious food when we are fasting under the blazing sun? We beat him black and blue, bashing open his pathetic head even while he is pleading that he is medically unfit to keep a roza (fast). Does he not know that while Allah (SWT) may be Rehman and Raheem (merciful and compassionate), we are not?

We are faithful upholders of the Islamic dictums which suit us. We throw sabar (patience) out of the window when it suits us, but castigate non-Muslims for not showing enough tolerance towards us. In fact, our hobby is to seize upon with glee any case of real or imagined discrimination in the Western world that we can get our holy hands on and make a brouhaha about it.

Our faith is so feeble and our stomach so gluttonous that we desperately needed this wondrous Ehteram-e-Ramazan Ordinance, promulgated by our Amir-ul-Momineen general Ziaul Haq, who closed down all restaurants and clubs during Ramazan hours in 1981. Naturally, we couldn’t be relied on to see others eating and refrain from waiting for iftari. Actually, we must credit our democratic and legendary leader Zulfiqar Ali Bhutto who set the train rolling with his bans and ordinances. It is said he did this to appease the Mullahs whose votes he needed, but the genie is out of the bottle now. It has come to our notice that someone had the audacity to comment after the guard incident:

How interesting that the person prefers to be nameless which in itself is an indicator of the power we wield over all of you sheep.

The state has also helped us on our path to Sharia by tacitly encouraging ordinances and bans to facilitate our views which are now spreading far and wide, by the grace of God. Astaghfirullah! We should have said Allah (SWT), not God. Allah (SWT) is only ours while God is theirs.

What is really worrisome, though, that those pesky Bangladeshis, who troubled us so much in 1971, have so far resisted all attempts to pass a similar Ehteram-e-Ordinance law there. In fact, these fake Muslims have even refused to countenance a blasphemy law or criminalise Ahmadis. No wonder, then, that they demanded their own land. How could we have lived peacefully with such nauseatingly tolerant creatures?

During Ramazan in Bangladesh, the Muslims fast while the Hindus and Christians continue to hold their festivals with music and dance. Unbelievable! Now we will have to pray extra taraweeh to get rid of the disgusting taste left in the mouth by such horrible respect for all faiths.

Moreover, does Islam not require purity and holiness, not unlike Hitler’s quest to purge impure people from the German Reich? It is the business of the state to question everyone about their religious beliefs, be it on the passport form or on the street. As for that bloodied guard, we taught him and all of you a lesson you will never forget; open your mouth during Ramazan fasting hours only to curse, beat, smash, backbite, overtake or bribe. And pray, of course.